There are moments when one has to choose between living one's own life, fully, entirely, completely-or dragging out some false, shallow, degrading existence that the world in its hypocrisy demands. - Oscar Wilde

Hello all.  Welcome back to the Club.  Our weekly gathering of men and women who are in, or interested in being in, Domestic Discipline or Wife Led relationships.  I hope you all had a great week.  Mine was probably best described as an . . . epic fail.  At least where personal behavior and resulting discipline were concerned.  And, the fault kind of lay with both of us.  I really should have gotten spanked last weekend for bad behavior the preceding week.  Didn't happen, for various reasons.  Then, we had a session scheduled for Tuesday night, but the clock kind of ran down and then she decided to let me off the hook because I had a crazily early morning appointment the next day followed by a business trip, so going to bed early was preferable, so she "tabled" our session.  To be clear, I did not ask her to do that, but I didn't try to talk her out of it either.  Then, the business trip turned into two nights of carousing.  Because of the combination of early meetings, travel and last nights, I worked out only one day, and my dietary choices were appalling.  My inclination toward rabble-rousing at work also was on display, though in a context in which I can defend the decision to do it.  And, to top it all off, my wife is now gone on a trip of her how, so none of this will be corrected until next week at the earliest, and given our pattern of "punishment delayed is punishment denied," there are good odds it won't happen at all. So, once again, the very best intentions have been thwarted by distractions and, frankly, not following up on our commitments and making this the priority that we keep saying it is.

It sounds like I'm not the only one.  ZM noted:  "We have fallen down in a big way on weekly check-ups because of a full house during summer and I can clearly see the impact on my productivity. I think self reporting is very difficult and for me it really isn't that effective."  Amen, brother.

I do think our weekly report card idea is worth continuing, but I think for some period of time, we really need a daily regimen.  A few weeks ago, I posted a "report card" we were contemplating using for daily reporting, and we do need to explore it, then use the Saturday reports as more of a summary or weekly review to check in with each other address anything that wasn't taken care of during the week.  While weekly check-ins serve a role, it may be more about role enforcement than making sure bad behavior is addressed.  As new commenter Helen points out in a comment to last week's post, the ideal really should be addressing bad behavior when it happens.  Now, to a big extent that was not an option for us this week, thanks to the independent and overlapping travel schedules.  But, as a general matter it should be the goal.

There were a lot of interesting comments going on last week. In relation to the discussion about weekly sessions and their potential downsides, Helen observed:

"If it was part of a weekly grade, no way. For the same reason, we don't do maintenance spankings. We both believe that punishment works best when it is visceral: Misbehavior, correction, lesson learned. When we have to delay it because of the circumstances, we deal with it as soon as possible. And we do not combine behaviors; when I have to address more than one misbehavior with Andy, I spank for the first thing, send him to the corner to contemplate, and then put him back over my knee to spank for the next thing. I know it may work differently for other couples but that is how DD works for us."

That part about not combining behaviors has been on my mind for a while.  When I have weeks like this one, where one bad behavior follows another follows another, there does come a point where, when faced by the next temptation, I just think, "Well, what the fuck, I'm going get spanked already anyway . . ."  Making sure that separate offenses are addressed with separate spankings would fix that, though the challenge becomes the commitment on her part to take the amount of time required to do that.

DJ, Alan and I had a series of exchanges regarding the prevalence of DD and the extent to which the culture may be more judgmental of F/m discipline than when it is a male spanking a female.  As we discussed, I don't think that is entirely true.  I think the vanilla culture may be more tolerant of F/m spanking but not F/m disciplinary spanking. In the disciplinary context, all sorts of concerns arise about domestic abuse and "politically correct" concerns about male dominance.  In the F/m context, the condemnation is more about whether men in DD relationships are "manly."  More on this below, but I do think Alan raises this interesting prospect:

There also were a series of exchanges regarding "manliness" and "humbling."  ZM observed:
"There is no doubt that the actual punishment sessions aren't very manly, and in fact I think the effectiveness of the punishment is directly related to how much I feel like a little boy (or girl) during the process. If humiliation is included, then it even more humbling and less “manly.” This humbling can be hard to accept and is probably hard to watch, but I do think it is important and even though it may not look or feel very manly at the time, it is playing a key role in making me a better man. There is good precedent for this methodology as it is similar to the philosophy of military boot camp... Break a person down and rebuild them from the bottom up... I guess my wife and I are just focusing a lot on the “bottom” part. ;-)"

Another commenter accused me, wrongly, of having a problem with men who are part of a dynamic involving "unmanly" dress, stating: "Sometimes manly men get spanked. Sometimes they wear aprons too. And I don't think the ones who get spanked should cast stones at the ones who wear aprons." 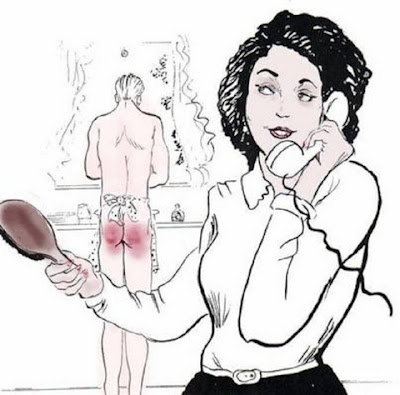 As I pointed out, I had not said any such thing and had, instead, made a more general point about Domestic Discipline being focused on improving male behavior and performance, while some forms of Femdom may actually reinforce the idea that men are weak and, instead of seeking to make them perform better, seek to reinforce his weakness and her supremacy.
But, the comment on "aprons" actually got me thinking about a topic for this week, particularly in combination with ZM's comment that for him "the effectiveness of the punishment is directly related to how much I feel like a little boy (or girl) during the process."

A few years back, I posted a topic about gender roles and balancing male and female energy.  I had been reading a book on Tantric philosophy(not the Americanized sexual stuff, rather the real philosophy that has a lot of similarities with some forms of Buddhism). This particular book posited that posited that within each of us there are elements of the opposite gender, and that one goal of Tantric practice is to bring out and develop the inner woman within each man and the inner man within each woman.  My question for the group was, to what extent is that part of what is happening with F/m domestic discipline and Female Led Relationships?  In your own relationship, does submitting to a spanking involve some reshaping of your male gender role and allowing some more feminine element come to the fore?  Conversely, if you are a female disciplinarian, does giving a spanking or taking control of the relationship involve some channeling of your inner man?  To what extent is switching up the gender roles an explicit goal in your DD relationship? 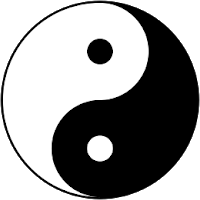 And, I got a whopping four comments.  It was one of the biggest flops I've had with a topic.  But, that may speak to the strength of the taboo itself, and today we seem to have a group of commenters who are a little braver, a little more "out," and a little more self-aware and open to exploring what lies within that was the case back in 2013.  So, let's try answering those questions again.  But, let's also add a more specific one:  Does your Domestic Discipline or Wife Led Marriage include some element of "feminizing" or humbling by wearing female clothes or clothes more generally associated with females, such as aprons, panties, etc.?  If so, was that at her instigation or yours, and is being put in such gender-bending clothing or accessories considered part of punishing you, or is it something you are into and want to do in order to express your female energy?  Or, is it just about being naughty and kinky?
Have a great week.
Posted by Dan - A Disciplined Hubby at 8:41 AM