Club Meeting 253 - Leverage & The Value of Not Being Nice

"Be tolerant with others and strict with yourself.” - Marcus Aurelius

Hello all.  Happy Saturday.  I hope you all had a great week.  Mine was OK, though kind of tiring for a short one.  And I spent half my day yesterday dealing with computer problems.  Funny how keeping all these "time saving devices" working can consume a whole day.

On the FLR and DD front, I feel like our relationship is working on about the same level as my computer -- lots of potential though largely unfulfilled thanks to various interferences and process glitches.  It's frustrating, because a couple of weeks ago I put quite a lot of time into drafting daily and weekly "report cards" and coming up with plans to build some structure into our DD relationship to get it back on track.  She also seemed highly motivated.  But, it just never quite came together, and for the same reasons as every other time we've tried to move it forward -- work distractions and travel, and kids in the house.  I'm starting to wonder whether the reason past polls showed that those into DD were overwhelmingly over the age of 50 is best explained by the simple fact that it's often in our 50s that the kids finally get the the hell out of the house once and for all, opening up some space for more adult activities.  But, that takes a long time, as I'm learning that empty-nester status is a process, not an event.

As has been the case often of late, I find myself drifting along with no particular topic in mind.  Maybe this is a byproduct of the low-level frustration I've feel for awhile with the constraints imposed by a weekly topic  -- my mind is simply refusing to come up with actual topics, so instead I ramble and see what comes of it.  While they aren't confined to a well-defined topic, there were a couple of things that attracted my attention this week and might generate at least a little conversation.

A few weeks ago, I read about the Smallville actress who was arrested for allegedly acting as a recruiter for a sex cult.  Despite the salacious topic, I didn't pay a lot of attention to it at the time.  This week, however the New York Times posted a long investigative piece about it,  entitled The Sex Cult That Preached Empowerment:  https://www.nytimes.com/2018/05/30/magazine/sex-cult-empowerment-nxivm-keith-raniere.html.  I personally found it a really fascinating read, even though, its title notwithstanding, there was very little discussion of sex.  Setting aside its Amway business model and a branding ritual that made me squirm, the whole thing sounds more like a group of "life coaches" and their students, finding new and interesting ways to encourage self-improvement by coming up with personalized consequences sufficient to motivate an actual positive behavioral change. 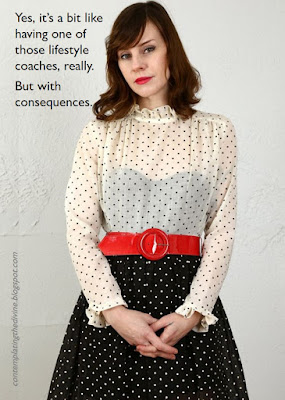 The leverage they created included things like pledging "collateral" in one form or another, such as giving the leaders of the group a letter admitting to some embarrassing or illegal act, but if the person met their personal performance goals, the letter would not be released.  The collateral would not be sacrificed and the person would not suffer any detriment, as long as they did what they said they were going to do.  They also used group consequences for individual failures. For example, if John set a goal of running every day and he failed to do it on Monday, then on Tuesday all the men in John's assigned support group might have to give up their morning coffee.  Knowing that others might pay a price for his own failure would presumably give John a greater incentive to do what he pledged to do.  Many of the "motivators" really seem to be about raising the consequences of failing to such a high degree that the person was left highly, highly motivated not to fail. 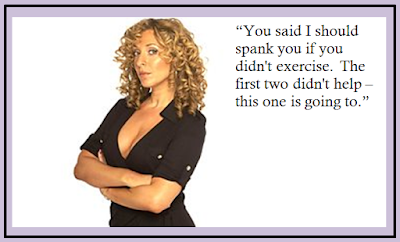 It was pretty fascinating in that most "cults" are focused on the initiates meeting the needs of the leader or guru, but this one was built more on the principle of experienced initiates helping newcomers meet their own goals, with the initiates paying the leader a fee for taking part in this system and getting his instruction.  Kind of like a Tony Robbins seminar on steroids.  But, also with an overlay of D/s, including "Master" and "slave" titles. 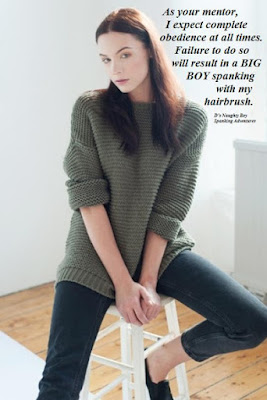 While definitely more extreme that what most of us are doing, the parallels to asking wives to act as coaches or mentors, with the authority to raise the stakes sufficiently to really get our attention, was hard to miss.  Because for those of us who are using DD to try to improve ourselves and accomplish more or break bad habits, that is what DD is about, right?  Gaining sufficient leverage to get over those impediments that get in the way of meeting your goals?

In parallel with this, I've been reading a book called Not Nice: https://www.amazon.com/Not-Nice-Pleasing-Speaking-Unapologetically-ebook/.  It's all about the pressures we all feel to be overly "nice" at the expense of our own self-interest, and the stress this places on our psyches and our relationships.  While the article above resonated with me because of my participation in Domestic Discipline, I actively sought out a book on learning how not to be "nice," because I think it is a concept that is really, really important for our Disciplinary Wives.  As we've been discussing over the last few weeks, one of the big impediments to making the leap into real Head of Household status, or to becoming really rigorous at enforcing the rules, is the natural tendency to be "reasonable" or, in a word, "nice."  It's part of the same spectrum as seeking to avoid being labeled as "bitchy."  We all have a tendency to dumb ourselves down and avoid speaking our minds, because we want to avoid hurting or offending others. But, the price to be paid for that is we're never really living up to our potential or satisfying our own needs or, in the DD context, his needs to be kept firmly under her control.

[Update: I was working my way through the above book as I wrote this post.  I've now gotten through most of it. On balance, I think it has some good tips on how to be more assertive and more comfortable with drawing boundaries.  But, there are parts in which--in my personal opinion--the author draws boundaries that seem to be all about he gets his needs met and no one else does even if the "sacrifice" on his part is trivial, resulting in what seem to be very one-sided friendships and personal relationships.  Any real human relationship involves doing some things you may not be into at the time, in order to support the other person.  The author is very cavalier about dismissing his wife and friends' needs for support on flimsy bases.  Like refusing to go out with her for an evening when her parents are visiting even though they rarely visit, because he wants to spend the time hanging out with two friends he could see anytime, then justifying it based on the importance of "needing time for himself."  Everyone draws their boundaries in different places, and while I like the program the author lays out, at times he seems to be going more for obnoxious "Bro" boy than an independent or assertive man. I'm all for authenticity, but it's possible to be a perfectly authentic douchebag.  In advising young execs at my company on business development, I often tell them, "Be yourself.  Unless your "self" is a disagreeable, pretentious, self-important douchebag.  In that case, by all means be someone else."]

I suspect that the Disciplinary Wives recognize this dynamic even more so than the men, because our women are conditioned to be nice and nurturing and non-aggressive, which is all great except that makes it very hard for them to step up into leadership roles, because those roles often involve saying "no" and sticking to it, and enforcing the rules even when he's offering all the reasons he should be let off the hook.  Her natural desire to be "nice" can create a dynamic that just doesn't work in a real DD or FLR relationship,  because we have agreed that she will be in charge and that I will be subject to her rules and her discipline. We disciplined men want that discipline to be firm, unyielding and hard.  Basically, we want her to learn not to be "nice." We want her to speak her mind, and we want her to be more open and direct in doing so, which was what we were talking about last week.  Hence, my interest in finding resources that might teach my wife how to break the "nice" habit and step more fully into her leader role.

Another reason I went looking for such a book was our discussion about trying to talk our way out of consequences and rules.  I want to find ways for my wife to get more and more comfortable telling me, "No means no." 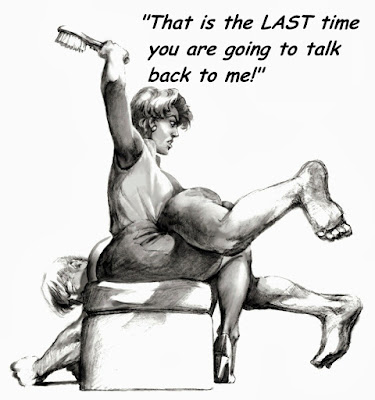 Like I said, I don't have much of an actual topic in mind for this week, beyond the general topic of getting leverage through spanking and non-spanking means, and encouraging our wives not to be nice and to recognize that in DD "nurturing" may include being quite unyielding, firm and resolute. I think the concept that unites these two disparate topics, and the article about the "sex cult," is the focus on consequences.  As men who asked for Domestic Discipline, is it consequences we are really looking for, and for someone who is strong enough to keep escalating the consequences such that the behavior actually does improve?  I do know that in my own case, I am awfully hard-headed and strong-willed, which may mean that to get sufficient leverage over me to effect a real change, my wife has to be prepared to really escalate the consequences to get my attention.

Well, I know that is not a particularly focused topic, but it's what I had on my mind this Saturday.  FYI, I'm traveling next weekend, so there likely won't be a new posting next week.