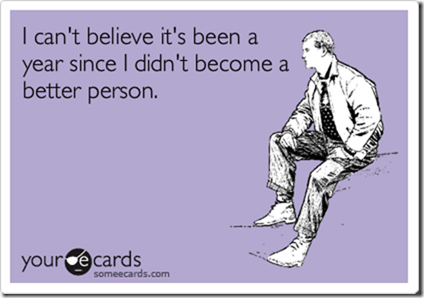 Season's Greetings one and all. I hope you've had great holiday, and I hope you enjoy the waning hours of 2014.  Safely and responsibly.

A common theme that unites many couples practicing Domestic Discipline is self-improvement and, for the Disciplinary Wives, giving their hubbies and significant others that extra little motivation required to address all those nagging little behavior problems.  Which fits in very nicely with that New Year's tradition -- making resolutions.

I like resolutions.  I like setting goals. I know I won't always hit them, but it's amazing what you can accomplish over time if you are able to improve incrementally day by day, week by week, year by year. On the other hand, I admit to being a little depressed when I look back at old blog and journal entries and realize that I seem to wrestle with some of the same challenges year after year.  But, hope springs eternal and, therefore, here are a few of my resolutions for 2015, some focused on general improvement and others related more specifically to our Domestic Discipline lifestyle.  I also have provided a list of resolutions that I am going to ask my wife to adopt, since ultimately my success in carrying out my resolutions may prove to be a function of that extra motivation she supplies to my upturned bottom.

In the spirit of "I'll show you mine if you show me yours . . ." here goes. I invite you to share your resolutions and those you would like to see applied to you, for your and her benefit, by your Disciplinary Wife (or husband for our few Disciplined Wives).

I hereby resolve to: 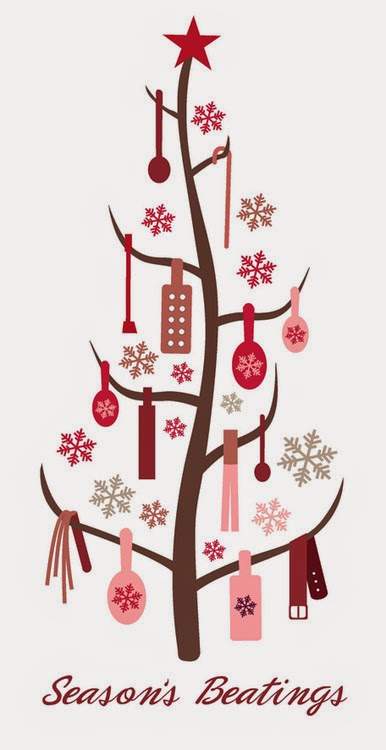 Hi all.  Can't you just feel 2014 winding down.  I hate to speak ill of the almost departed, but I have to admit, it has seemed like a challenging year in a lot of ways.  And while the holidays usually are my favorite time of year, this time they kind of snuck up on me, and work seems to be accelerating as we go into year-end, while all I really want is to veg out in front of a the Christmas tree with a big glass of wine.  But, some years are like that and, despite presenting some challenges, my nuclear family all made it through the year in one piece and in relatively good health and spirits.  And, that alone is much to be thankful for.

On to this week's question, which I offer in the spririt of the season (I also apologize in advance to those of our readers who don't celebrate Christmas):  Have you ever given or received a spanking or DD-themed Christmas gift?  And, what spanking  or DD gift would you most like to find under your tree Christmas morning?  At our house, Mrs. Disciplined Hubby will be getting a new rubber strap in her stocking.  While it is a practical gift, I suspect she will like it much more than a new frying pan.

I may take a break next week in honor of the Holiday Season, so here is wishing all of you a very Merry Christmas and a Happy New Year.

Hi all.  Sorry for the late start.  It's been a crazy couple of days, including some things that kept me busy and unable to post until now.  So, let's get to it.

This week's topic is a follow-up to last week's, which focused on tears.  Respecting Mistress suggested this related question:

What happens in the relationships where the husband does end up weeping? What kind of reaction does he get from his wife? How does his wife feel seeing him weeping? Is there any loss of respect from him - or does increase with her knowing he's taken his punishment. How does he feel towards her for 'breaking' him?"

Let's broaden a litte so it is not quite as focused on tears.  For those who have been brought to tears, "broken," or otherwise brought to an actual surrender to your wife's authority in a way that hadn't occurred until the, what was the effect of that on both of you?  How did you feel?  Happy?  Peaceful? Or, was there any resentment or a new sense of respect tinged with some fear or anxiety?  Wives, how did you feel the first time you saw that unmistakable evidence that you had really gontten your point across?

Sorry again for the delayed start.

I hope you had a great week and have girded yourselves to brave the holiday shopping crowds.  I am so far behind this year, I'm dreading walking around aimlessly, hoping that the one great gift for each person in my life will just magically present itself, thereby saving me from resorting to the dreaded gift card.  Given my behavior, I know what I should be getting, repeatedly, before, during and after Christmas, if Santa Claus really does separate us into Naughty and Nice groupings. 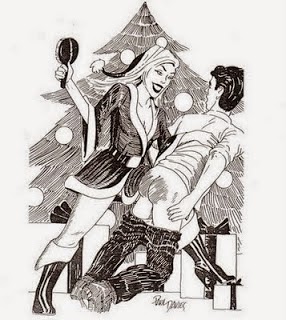 We have now closed another poll, and this one has a special resonance for me.  The topic was tears, specifically, have you ever been brought to tears by an adult spanking.  And, if so, was it just a few small tears of full-blown sobbing.  The results are:


Once again, our poll results are somewhat counter to what I would have predicted.  I have always suspected that if there was one area where disciplinary fantasy disconnects from disciplinary reality, it probably was crying.  Reading about "real" disciplinary spankings in forums like the Disciplinary Wives Club, one would think that vritually every well-delivered disciplinary spanking leave the husband racked with sobs and free-flowing tears.  Yet, the last time we covered this topic (early in the history of this blog), most of the commenters indicated they had not been brought to tears.  We now have a bit more critical mass, and the results above may be a little more indicative of what happens in real life, and I am a little suprised that the distibution is almost 50-50 between the tearful and non-tearful.  I also am very surprised that over a quarter of respondents say they have been reduced to real sobs.

I said this topic has some special resonance for me.  To such an extent that the prospect of crying was probably the most significant driver of the emotional reaction I had when I discovered the DWC website.  The stories of men being brought to tears over their wives knees fascinated me and had an undeniable attraction, but it was an attraction that was also utterly and completely terrifying.  The thought of letting go of control so thoroughly that I would sob in front of my wife while she paddled me was anxiety-inducing to an extent that is really hard to over-estimate.   Yet, the prospect of experiencing that kind of catharsis was also a major impetus for my decision to broach the topic of DD with her.  But, in doing so, I really did half-hope that she would not be interested, because the prospect of being brought to tears just terrified me so much.

So, here we are many years later, and I still have not cried, even as the result of spankings that I think anyone would acknowledge fall into the "severe" range.  While it is all speculation on my part, I think there are many things that account for it, including:  (1) I have a lead bottom and a weirdly high pain threshold; (2) my wife doesn't do a lot of stern lecturing beforehand, which might reduce mey resistance emotionally before the spanking even starts; (3) deep-seated fear of embarrassment that keeps me from quite letting go fully and completely; (4) spankings that are severe in terms of impact but not always in terms of duration, because my bottom starts to bleed (usually very minor, but enough that it makes her stop).

Alan alluded to that last one in his comment yesterday, as I do think that one thing that would help me get to the point of actual release is the prospect that a spanking that I am already having a hard time taking is likely to go on, and on and on.  I also think the choice of tool can be important, because some of our bigger, "thuddier" paddles tend to make my bottom go numb pretty quickly, which is counter-productive.

Alan also talked about his wife's reaction to tears and that she not only is comfortable with him crying but encourages it.  My wife and I have discussed this several times, and I think her attitude has progressed a lot as she has become more comfortable in her role, going from acknowledging that my crying might disturb her because it it shows is hurting me "too much," to getting over that and being OK if I do cry at some point, to mildly disappointed that it has not happened yet.

So, with that very long-winded opening, tell us your situation, hopes and fears where tears are concerned.  Have you been brought to tears?  Would you like to be?  If you have, were there certain things that enabled you to get there? If not, what do you think is holding you back?