Hi all.  Welcome to another session here at our Forum.

As I have discussed from time to time, while my first several years in this lifestyle was focused on domestic dicscipline, recently we have been exploring taking it to a new and different level. Before this year, FLR was never really an explicit goal of our relationship.  It was more classic domestic discipline, of the sort that Fred lives and has been kind enough to describe.

When change happens, it's often gradual and its impetus may be varied.  This subtle shift we are going through from DD to a wider FLR is like that.  Some of it came as a direct result of connections made through this Forum.  Exploring the more FLR-oriented portion of the disciplinary spectrum, through comments on this blog, through the blogs maintained by members of our community, and sometimes through emails with some of our members, left me more open to exploring wider themes of submission.  Frankly, my own inability to conform to authority was also part of the impetus, as I continued to watch my maverick orientatoin and inability to follow rules at work continue to limit opportunities (though while undeniably making opportunitiies as well).  Hence, our increasing exploration of FLR as I have asked my wife to continually take more and more of the lead.

In inching toward a more FLR-oriented lifestyle, we inevitably move toward a more transparently female-led lifestyle.  Spankings are episodes; FLR is more of a continuing power exchange and, if the woman is leading and making decisions, that is inevitably going to be on display at various levels.  And, how far that leadership extends may be a function of the settings in which it is allowed to be on display.  In trying to really embrace her leadership, we keep confronting the issue of how transparent to be about it.

Hence, last week's topic focused (or tried to) on interferences and impediments to living the DD or FLR lifestyle.  One that always comes up is children, and this time it was no different.  Though, my question also tried to get at what role our need for anyonymity conflicts with our desire to make DD/FLR a bigger part of our lives.  But, this week, let's stick to the children issue, particularly since Marisa and K.D. were beginning to have an exchange on that exact issue from seemingly very divergent perspectives.

So, for this week's topic I ask, what should kids know and when?  Marisa's position (if I am representing it accurately) was that they should not, while they are kids,  know about the physical disciplinary aspect of the relationship.  KD, on the other hand, lives a life where it is all out in the open.   We seem to have both ends of the spectrum represented, so let's open it up to those who may be at either end or somewhere in between.

I admit to being a fence-sittter on this one.  Our ability to keep things secret is probably less than we imagine.  Kids always know more than you think they do.  There also can be a big, bitg price to be paid for maintaining secrecy while trying to develop a deeper FLR, because keeping thing opaque also may mean the FLR takes root only in limited, sporadic ways because it is seldom on open display.  I also struggle with whether knowing about the DD elements of a marriage would really have the negative impact that some people think, or whether most kids even care that much about what their partents do, beyond the normal mild to moderate distaste at the idea of any adult engaging in anything sexual, let alone kinky.  Rhiannon has asked on her blog whether, perhaps, kids are so wrapped up in their own worlds that they don't care about what we do mearly as much as we presume.  Also, might their reaction depend a lot on the age at which they learn about it?  Coming out for the first time when they are teenagers could be unsettling, but what if a fully "out" FLR that included DD was just what they grew up with as young kids?   And, finally, to what extent, if at all, does gender matter?  I don't think it is the worst thing in the world for young women to grow up with a strong sense of female empowerment, since god knows they are confronted with enough negative images and inputs on that front. But, what about boys -- would knowing dad gets spanked give them an increased respect for women, or a decreased level of respect for dad?

Big themes, and I know we have explored this one before.  But, our community here continues to grow, so sometimes it is good to revisit and open things up to our new members to give their perspective.

Have a great weekend!

Hi all.  I hope you had a great week.  Sorry again for last week's absence.  Many of us have expressed frustation at one point or another with the extent to which "real life" interferes with our best intentions regarding domestic discipline and FLR.  Last week was one of those times for me, and it was the blog that was interfered with.  I promise to try not to let that happen very often, though I am finding that Saurdays are getting increasingly busy and more often than usual I am not near a computer for large parts of the morning.  I'm trying to figure out how to deal with that -- perhaps trying to draft a post earlier in the week so it is ready when Saturday morning comes.  I also might start posting on Friday nights.  Though, my posting and comments already suffer sometimes from lack of proofreading, and given the prevalence of Friday happy hours and social events,  I doubt posting that day will aid in my efforts to produce a quality product.

These thoughts about real life interfering with our best intentions provided an easy segue into a blog topic.  What aspects of the rest of your life interfere the most with your efforts or goals regarding DD or FLR, and what do you do, if anything, to try to minimize or mitigate them?  Are the interferences family related, work, social activities, business travel?  Or, do you simply not allow such things to interfere when punishment or discipline has been earned?  One aspect of this that I am particularly curious about is whether all or most of the major interferences are also tied up in the fact that for most of us, the DD and FLR aspects of our relationships are something we keep hidden from others.  Would being more open about this thing we do result in it being a deeper and more regular part of our lives?  Imagine how much our lives might change if all our wives had no problem with something like this: 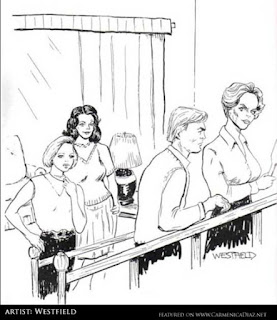 I hope you all have a great weekend.

Hello all.  I have some things I need to take care of this weekend and probably won't be near a computer to do a topic posting.  So, the blog will take a break for a week.  That will also give everyone some additional time to answer last week's topic, given that lots of people posted but few actually on topic.  :-)

Hi all.  I hope you had a great week.  We've had some good discusssions lately, getting at the roots of how people think about their DD and FLR relationships, what motivates them, etc.  With summer upon us though, let's switch gears a little and take things in a slightly lighter direction.

I finished my work week with a little diversion.  A night at the movies, which is a luxury I haven't had in awhile thanks to a hellishly busy work environment. But, by Friday I had hit the inevitable wall and needed an escape.  Following through on that escapist bent, I went to see Mad Max: Fury Road.  One of its predecessors, The Road Warrior, is one of my personal favorites for testosterone-laden escapist adventures.   (Probably because in addition to my other vices, I like to go fast, in just about every aspect of my life, for good or bad.)  This latest contribution to the series is, however, a little different and reflects some of what we have been talking about recently in terms of gender roles and expectations and how they impact leadership. One reviewer characterized the movie as "a kinetic, hallucinatory, boldly feminist chase flick," which sums it up pretty well -- but who would have thought "boldly feminist" would appear in the same sentence with "chase flick."  But, there it is, and it's accurate.

As with most really good movies, this one doesn't tell, but shows.  The lead character, by the end of the movie, really isn't Max but, rather, the female protagonist, Imperator Furiosa, played by Charlize Theron.  She is the real "road warrior" in this flick. But, more than warrior.  Leader.  In this male-famale adventure match up, she is clearly the stronger player, in terms of both warrior-ing and leading.  There is a great scene where the bad guys are coming, the good guys are down to three bullets.  Max fires the rifle twice.  Misses twice.  He hesitates for a moment, then hands the gun to Furiosa, who fires and hits.  It is a subtly powerful scene, with the warrior Max handing over the power to someone he knows is his better.  And, like many really confident leaders, she doesn't demand or force.  She lets him figure out that she is better than him in this area,  allows the time necessary for him to make a free choice to hand leadership over to her and, once he does, she performs.  Again, a lot going on in that one scene.

But, enough about that particular flick, particularly after I just said I wanted to go more light-hearted. This week's topic is about DD, FLR and similar power-exchange lifestyles in the movies and literature.  What is your favorite movie, book or television show with such themes? Or that explore female leadership in positive or interesting ways?

Have a great weekend.