The Club - Meeting 340 - NOT Asking for It, and Anger Revisited

When someone says that I'm angry it's actually a compliment. I have not always been direct with my anger in my relationships, which is part of why I'd write about it in my songs because I had such fear around expressing anger as a woman. - Alanis Morissette

Well, I feel like I’m finally coming out of the Covid-19 induced blahs.  I’m not sure what brought them to an end, mostly because I’m not sure what caused them in the first place. Though, in a situation as abnormal as the one we’ve all been going through, is it any wonder that it’s pretty easy to get disconnected and discombobulated? But, it really was becoming pretty problematic, because it wasn’t just my interest in DD that plunged.  My libido diminished down to nothing, and I found myself not having any interest in much of anything.  The ultimate result was that during a period in which we had the house to ourselves almost every day and more than ample time on our hands, we were having less sex than usual and Domestic Discipline was starting to feel like a distant memory.  In fact, because the pandemic got tacked onto an extended period with houseguests, almost five months went by without a single spanking.  That is by far the longest “break” we’ve ever taken, and it was not something either of us consciously initiated or wanted.My bottom’s months-long reprieve ended this week.  In retrospect, it had been building for a long time. say familiarity breeds contempt, and wow have we ever been familiar to each other for the last few weeks.  I'd gotten snippy with her several times during the lockdown.  Honestly, I’m not sure it was much worse or more often than usual, but this time there wasn’t any time apart between those instances of marital friction. 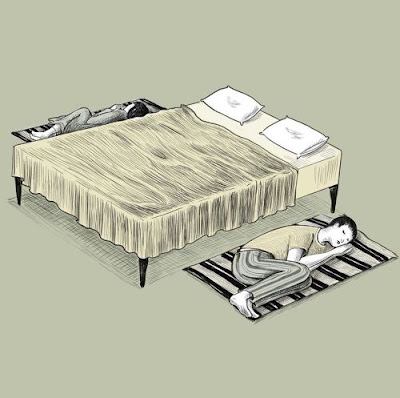 I had plenty of warning.  Several times, she called me out on it when I said something insensitive or arrogant.  In the past, when I caught myself behaving badly, I usually would have pointed out, perhaps in a journal entry, that our DD arrangement gives her the authority to put me in my place any time she wants.  Yet, I didn't do it this time. Why not?  Well, two reasons. First, as discussed, for some period of time I just lost interest DD.  Second, I was frustrated that even though she kept voicing hurt and displeasure with how I was talking to her, she did absolutely nothing about it. I finally decided (sort of) that if this thing we do was worth doing at all, then she really needed to take ownership.

In an interesting bit of timing and synchronicity, I had been thinking about this non-initiation strategy on Friday morning, and wondering whether she would ever recall that if she was really angry about my conduct, she had the power to do something about it. That night at dinner, out of the blue she said that whether I was interested in DD or not (she had apparently been reading the blog and knew about my flagging interest), I was going to be getting a dose of it.  Her message wasn’t conveyed with a lot of authority. Yet, I can't emphasize enough how different it feels when a Disciplinary Wife takes the initiative, as opposed to just kind of accommodating or initiating only after being reminded about her authority.  It is just a totally different thing when the prospect of a spanking actually feels imposed.

I’ve talked a couple of times recently about wanting a “reset,” i.e. something that might change the nature of our DD relationship and make it more “real.” More imposed.  Something that feels less initiated by me, to the point that it feels almost non-consensual. Well, I think I may have finally gotten it.  I admit that I was pretty anxious about the likely level of pain I was going to experience, being spanked hard on a butt that hadn’t felt a paddle or strap in five months.  Yet, we’ve been at this so long, it’s hard for it not to feel a little routine or scripted.  I went upstairs when instructed.  I set out her tools, stripped off all my clothes, and waited for her.  She came out of the bathroom after a few minutes, and the lecture began like it has so many times before.  She sighed a bit, a soft expression of disappointment that usually leads into a fairly unemotional listing of what I am about to be spanked for.

Yet, this time, something changed.  She really cut loose with the lecturing.  In an increasingly angry tone, she told me not just what I had done, but how my arrogant tone and remarks made her feel.  She was virtually yelling at me, as she berated me for my behavior and said that was absolutely done taking it from me. It went on longer than any of her prior lectures and, when she had finally said everything she had to say, she told me brusquely to get over the ottoman that she always spanks me on.  She laid into me hard and long with multiple straps and paddles.  After several minutes and a couple hundred swats, she asked whether she was getting through to me.  Between gasps and yelps, I assured her I was, but she made sure I knew I had more coming.  And, she delivered.  I got up from the ottoman one thoroughly chastened little boy.

It’s not just me who saw this as a possible turning point.  She said afterward that this was the first time she had spanked me when she was feeling real anger and the first time she really cut loose when lecturing me.  We talked about how empowering it would be for her if she stopped censoring her own feelings and just spoke up whenever she was mad. 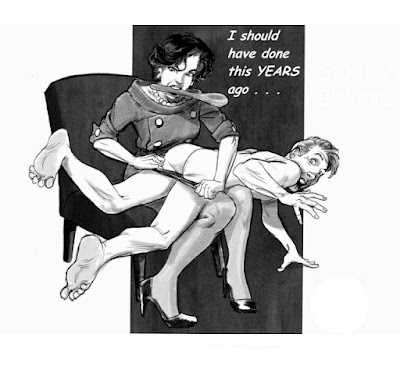 How do I feel about it?  I’ve said before that I like it when my wife displays emotion before or during a spanking, but this was on a really different scale. It was disturbing and embarrassing and extremely humbling in the moment.  Yet, I’m glad that she now seems to have internalized that it is OK to hurt not just my bottom but my feelings when I hurt hers.  I also think this is the way it has to be if discipline is going to lead to real improvement.  My ego is pretty strong, and I need more than just a cold, clinical application of the paddle to break down my defenses and really accept accountability. It also helps me to accept her authority if she is expressing herself like she really is in charge.

How about you? Ladies, do you keep your anger at your husband bottled up?  Or, so you sometimes cut loose and let him know how he’s made you feel? Do displays of anger and emotion help establish your role and your authority.  Or, do your spankings tend to be more business-like and controlled?  Men, have you pushed your wife to the point of real anger? Does it make the discipline feel more real?  Do you feel more under her authority when she expresses that authority with real strength and angry passion?