The Club Meeting 323 - Whatever It Takes

To be accountable means that we are willing to be responsible to another person for our behavior and it implies a level of submission to another's opinions and viewpoints." ― Wayde Goodall

Mine was kind of roller-coaster of ups and downs.  On the upside, this week was the culmination of a bunch of frantic work travel that centered on events I “had to” attend and things for which I had some actual, significant role to perform. I still have to travel this upcoming week, but it’s a short trip for something relatively unimportant.  So, I do feel a sense of relief that a multi-week series of obligatory work trips finally came to a close.  We needed it to.  Anne had the same sense I did, that we had been separate too often lately.  We both had the sense of needing to be in the same place for even a couple of days, free of social and business commitments.  The feeling was not entirely consistent with our reality, as in point of fact we had seen each other just four days before, yet somehow this latest trip just felt so much longer.  I suspect it was just the aggregate of too many separate trips.  But, we both definitely felt it.  I’m hoping that now that the work and other obligations have paused, maybe I can get some of that Christmas spirit that K.D. and I have said we are missing.  I wonder whether it's possible to spank Christmas spirit into someone? 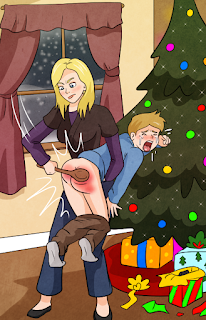 We had a good discussion last week, though I’m not sure anyone answered Alan’s actual question about whether there is a relationship between the extent to which a husband is naturally submissive and the extent to which corporal punishment is used in the relationship. As for the issue of natural dominance and natural submission and how much we individually reflect one tendency or the other, I’m in kind of an odd place right now.  For the last several weeks, I’ve been in a very dominant place at work.  There has been one incident after another in which I have gone off on someone or displayed a lack of respect for authority.  Yet, sitting here this weekend I feel a very compelling need to be firmly taken in hand.  Maybe it’s not paradoxical but, rather, inevitable.  I’ve spent several weeks way out on a dominant limb, and now I need someone to rein me back in.

We’ve talked before about using DD to solve problems at work, and it’s an area in which there seems to be little consensus in the group.  I really do which there was a way for my wife to have a more direct view into happenings at work and was more inclined to treat my work-related behavior very seriously.  Last week, Liz put it this way:

But arrogance is not leadership or at least not good leadership. He deserves to be punished for it and has asked to be punished for it. And because spanking was so prevalent in my family, I took to it quite naturally. I don't even consciously think of him as submissive or me as leading when I am punishing him, though clearly we both are. I just think I am smacking the arrogance out of him and now he can lead the way he is supposed to, whether at work or home. 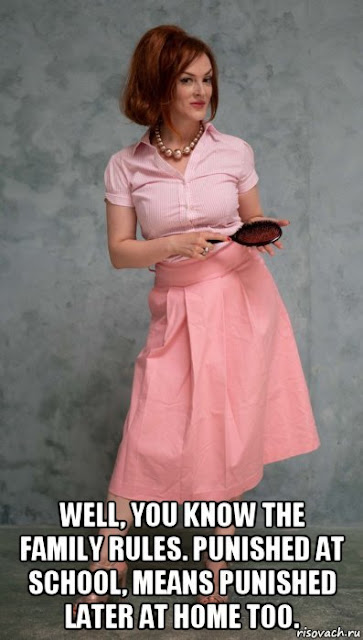 Extremely well put, Liz.  Unfortunately, the primary reason it falls to Anne to discipline me at home for problems caused at work is because no one there can or will.  It’s kind of like the old days, where if you got a spanking at school, you got a worse one from mom or dad that night.

The problem is for me the spanking, metaphorical or literal, happens only at home and not at work.  When I get in this very unbalanced state, I almost wish someone at work was strong willed enough to actually slap me down.  I would hate it at the time, but it would be good for me. My subconscious appears to agree.  Several months ago I recounted a dream I had in which I was attending some kind of work event that also, in the non-logical manner of dreams included both my wife and my father.  In the dream, I was to be taken out and spanked by our office manager.  I was very resistant and tried to plead my case to both my wife and my dad, but neither had any sympathy.  I think it's telling about my work dynamic that even in my dreams it was really two members of my family who made the discipline happen even if they didn't swing the paddle themselves, because at work there is no one who has a strong enough personality and enough authority over me to make me really, really want to make sure I don’t misbehave again.  That is a problem.  Merry put it this way last week:

Leader type people will constantly push limits and tend to be stubborn and self-willed, often to their own destruction (Lying, smoking, drinking, using foul language, aggression, and so on) The key to dealing with those behaviors is finding a type of discipline that is harsh enough to be a deterrent.

That is my way of drifting into a topic for this week.  Harshness.  Tough love.  The determination to bring about real change by any means necessary.  Escalation is another good word for it. 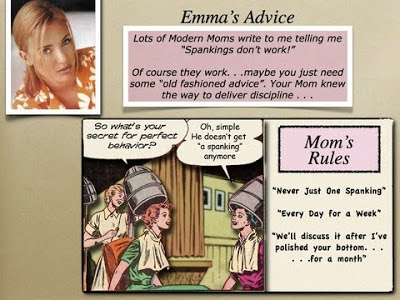 I really believe that one key to effective discipline is for the recipient to know that in a power struggle he absolutely will not win. It was sort of like that for me growing up. I didn’t get in many outright power struggles with my dad, because I knew that if I ever tried he could and would show me who was boss. He was just one of those guys who will not ever lose.  Thankfully for my ass, he was not into making a lot of rules, because had he been I’m sure my ass would have been bruised well and often.  And, there is not a doubt in my mind that he would have escalated to whatever level he needed to in order to get his message across.  That’s just who he was.  Conversely, my wife has a sibling who is a complete fuck-up, and I think one reason is he learned growing up that my mother- and father-in-law would let him win if he resisted their authority.  In the end, they were never quite willing to find that type of discipline that was harsh enough to be a real deterrent. 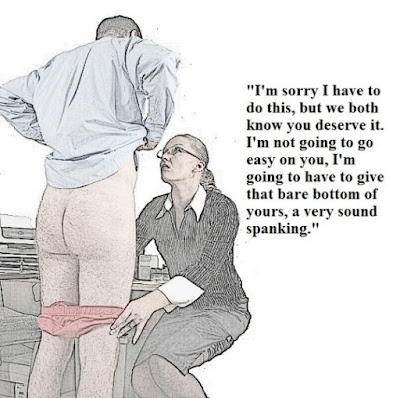 Have you experienced that in your Domestic Discipline relationship?  Has there been a time when your wife’s message wasn’t getting through, so she increased the stakes in some way that finally got your attention?  Maybe the spankings became longer, more frequent, or more severe?  Or, maybe she added some punishment that did not involve spanking?  Perhaps some form of humbling or humiliation or public embarrassment? 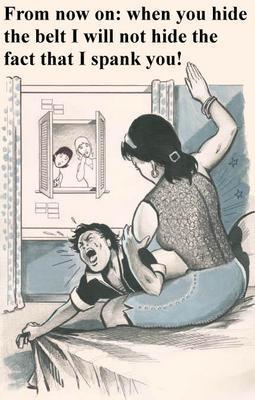 Whatever it was, did it work?  Conversely, perhaps there is some behavior that you want her to help you fix but current efforts have not been successful.  Is there something she could do that you fear enough that it might actually result in a real change if she did it or threatened it?
For the wives, have there been times when you were frustrated with his behavior and clearly weren’t getting through to him using whatever discipline you were using at that time?  What did you do about that?  If he’s asked you to help change his behavior, or if there is something he’s done that really pisses you off, are you willing to do whatever it takes to root that out?

I hope you all have a great week.
Posted by Dan - A Disciplined Hubby at 10:51 AM