We all wear masks, and the time comes when we cannot remove them without removing some of our own skin. – André Berthiaume

Hello all.  Welcome back to the Disciplinary Couples Club.  Our weekly gathering of men and women who are in, or would like to be in, Domestic Discipline relationships. I hope you all had a good week.

For once, I really had a pretty decent week where behavior was concerned.  Of course, thanks to the July 4th holiday I was away from work more than usual. Could there be a pattern there?  Hmm.  I wonder.  But, I really do feel like maybe I turned a corner this week, or at least can see down the road where the corner turns.  I didn’t have any significant problems with over-consumption.  Kept my temper at work.  And, I am trying really, really hard to get my diet and exercise act together and this week at least I succeeded.  Now, the challenge is to build on those small successes and not retreat.

Last week saw a wee bit of drama on the blog, and I’m not going to comment on it further rather than to say I have gotten used to commenters drifting into and out of this little corner of the blogosphere.  Sometimes I care more than others.  We have lost some commenters I really enjoyed and who could be counted on to provide thoughtful responses to most topics, such as Marisa and Holly.  It’s also puzzling when the future absence is unexplained.  Sometimes people just stop commenting for no apparent reason. It always leaves me wondering whether they took offense, got bored, or maybe suffered some personal tragedy up to and including dying.  You just never know, and that is one aspect of these electronic relationships that definitely is deficient as compared to the “real” world where people who actually know each other engage in real human contact.

And, that is sort of this week’s topic.  It extends in part from a conversation Danielle and I got into that began with one of the pictures I posted, namely the one of the guy with a recently striped ass bending over a hay bale.  As I told Danielle, that photo originally accompanied a story I read on some now vanished DD or FLR website.  The story involved a man and woman who were in some kind of kinky relationship with a dominant male.  It has been several years since I read it, and I can’t really recall whether the third-party was dominating them both, or whether it was some kind of cuckolding relationship with him sleeping with the wife and dominating the husband.  I kind of recall that he was dominating them both to some respect, but it also involved helping the wife dominate the husband.  Long story short, the wife had asked the dominant male to help take care of some behavioral problems her husband had displayed, then failed to connect with the dominant male to set up a time to take care of it.  So, he showed up unannounced at a dinner party they were having with another couple and made an excuse to take the husband out of the party and down to a barn on the couple’s property, where he spanked him to tears with a belt before allowing him to return to the party.  In discussing the story, Danielle and I got into a wider-ranging discussion about third-parties participating or witnessing this thing we do.

A few months ago, we talked about others knowing about our DD lifestyles, but this week we take it one step further. How many of you have had others partake in some way in your DD activities, whether merely as witnesses or as active participants?  Have you ever been spanked while a witness was voluntarily present or knew that it was happening or about to happen to you?  (I don't want to get off on a tangent about someone in a hotel or store accidentally overhearing a spanking.) If so, who, and how did that come about? For the spankee, what effect did having the witness present have on you?  Was it what you anticipated? For the spanker, did having a witness there give rise to any particular feelings in you? Did you change your approach to the spanking in any way?  And, if you know, what was the effect on the witness? Were they an active participant in some way? 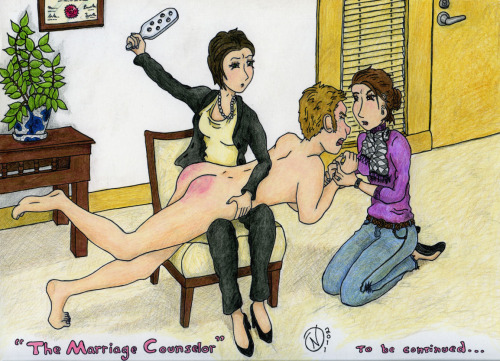 Or a passive but supportive observer? 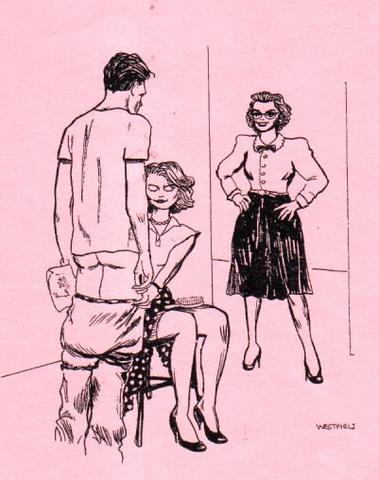 Taking things even further, have you ever had someone else participate in a disciplinary spanking?  Perhaps your wife ordered or allowed a spanking by another wife or by a professional?  Or, perhaps you wives have taken part in disciplining a man other than your husband?  If not, would you ever give it a try?

This is an area we don’t have any real personal experience with, though as I have posted my subconscious seems to have a thing for it, given that I have dreamed about scenarios in which I was taken from a party and spanked by a third-party, and I recall having a strong reaction to the story set out above. In the context of the dream I had, others did not participate in the spanking itself but were very aware that I was being led out to get one. 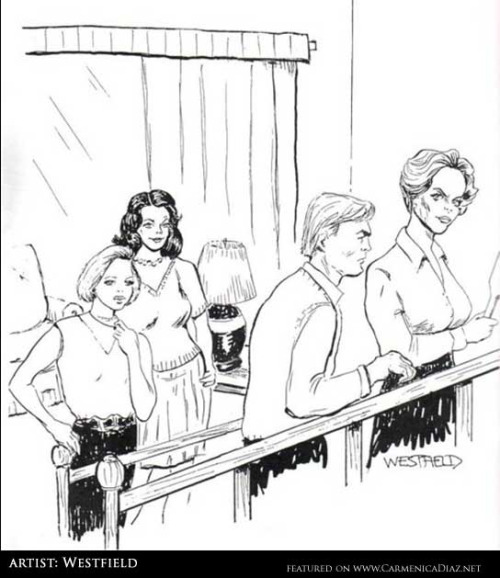 And, when Tomy has recounted the days of the real DWC and being sent to another wife for punishment, those stories too get a reaction from me.  But, I don’t have a similar reaction if the context is more of a spanking party where the women get to spank for no particular reason.  To get any reaction from me, the context really has to be disciplinary in nature. 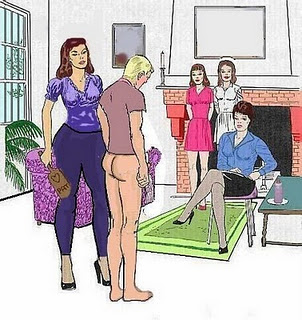 Danielle and I also talked about whether I would have a reaction to Anne spanking another man (though I highly doubt she would ever go there).  Again, if it was really in the disciplinary context, like acting as a “surrogate” of sorts and punishing a deserving DD husband, I honestly don’t think I would have any problem with it, any more than I would have a problem with it if she was a teacher or principal a generation or two ago and was responsible for using a paddle or cane to correct deserving young men.