Hi all. Welcome back to The Disciplinary Couples Club. Our weekly gathering of men and women who are in, or would like to be in, Domestic Discipline or Wife Led relationships.

I hope you all enjoyed last week's discussion. Helen's recounting of car spanking interrupted was a good illustration of one of the points I was mulling with that post, namely whether an effort to keep friends for family members from knowing about our DD activities might inadvertently expose them to being discovered by someone else, such as a neighbor or, in Helen and Andy's case, a remarkably forgiving police officer.  (Though as someone whose biggest pet peeve in life is slow drivers in the left-hand lane, I sympathize with Andy.)

The discussion then diverged to the merits of the cane.  It's interesting how much people are into that particular instrument, or at least curious about it.  I have a post from 2014 entitled Caning Tips and Methods, which is always among the top 4 or 5 in all-time popularity.  Ironic, given the problems my wife has had using it effectively.  I'm pretty sure it is among her top two least favorite instruments.  It's interesting the extent to which different instruments evoke different emotional responses.  Alan noted: "Its my impression that many women prefer to use a cane or maybe a strap even though they may actually employ a brush or paddle regularly because that is what works for their boyfriend or husband. Erotically the cane does very little for me but my wife loves the sound it makes and the impact. I also experience punishment with the cane differently than with other instruments. There is much less of the "naughty boy" feeling and more the disobedient or misbehaving husband feeling to it."

Does it work that way for you?  Do particular instruments evoke particular emotional responses, positive or negative? And, are there some you wish were used more and others less? 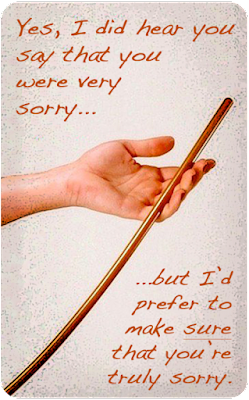 While I am not a Brit and, as I said I've never been subjected to an effective caning, there is something about the cane that really does get a response from me.  The whole caned schoolboy thing is such an iconic spanking image. 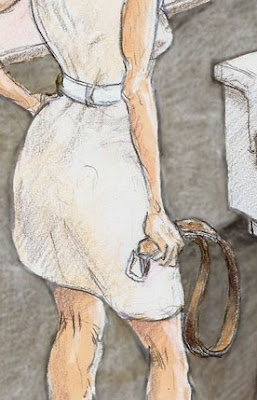 Same with the belt.  Probably because of some early childhood experiences, the belt evokes a feeling of vulnerability and has a very "parental" vibe.  Until recently, I didn't consider it to be a very effective instrument.  Then I bought a "gun belt," which is basically a leather belt made for sportsmen or others to carry a holstered handgun.  Because of the weight they need to support, the leather is very thick and stiff.  I bought it because I was looking for an instrument we could take with us on trips without giving the TSA guys a thrill.  She has used it on me one time, and it definitely gets the job done. 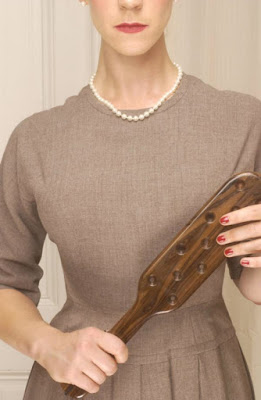 I own several paddles, but over time I've become a lot less enamored of them.  As I've written about a few times, lately I feel the larger, thuddier paddles are almost "too hard."  The pain hits like a lightning bolt and, instead of giving in to the discipline, the paddle puts me in a very resistant head space.  I also wonder whether my butt has just gotten more sensitive over time, as I swear the spankings just hurt way more now than they did a few years ago. Though, she may just be a much less forgiving spanker now than in the past.  While I don't really love paddles anymore, I probably will keep buying them, as I have a thing for craftsmanship and I still admire the look of a finely crafted paddle made from some exotic, highly grained wood.

For pure effectiveness, I have to go with the leather strap, though it doesn't really give rise to strong emotions for me. 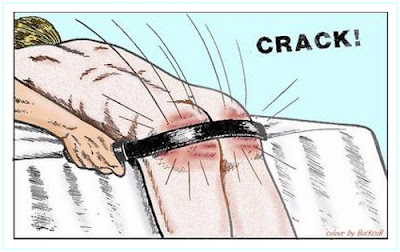 To me, the strap has just the right balance of short and long-term severity.  Depending on how strong she swings, there can be some warm up that gets me in the right, compliant mindset, but then she can really let loose with a very, very painful thrashing.  As I've become more convinced that duration is more effective than pure pain from each swat, the strap has emerged as my personal "favorite" for a truly effective overall punishment. 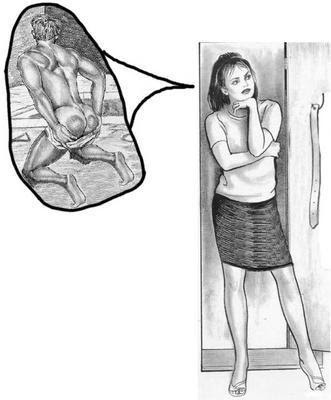 Now, based on what she uses the most, I think my wife likes the strap but really gravitates toward paddles.  I've never asked her whether there is a particular instrument that evokes a strong emotional response. 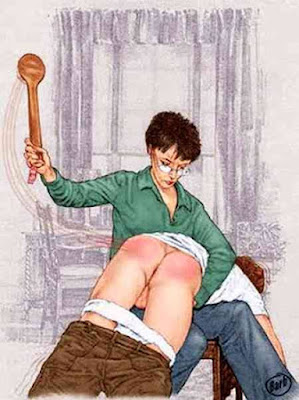 Interestingly, one instrument that I think is extremely effective is one she doesn't seem to go to very often, namely the bath brush. 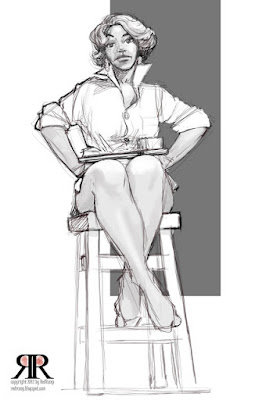 For severity, it is far, far better than any hair brush and rivals many of our paddles.  It also seems to be hard to beat for sheer versatility.  It can be used effectively in any position, including OTK, which isn't really true of a strap or belt or of many paddles.  Also, unlike most really effective instruments, it can be left out in plain sight.  Yet, for whatever reason, she doesn't seem to think of it as a "go to" spanking instrument.

How about you? What instruments get a strong emotional response out of you or your spouse or, perhaps, bring back strong memories of spankings past?