“Commitment is a word invented in our abstract modernity to signify the absence of any real motives in the soul for moral dedication.” – Allan Bloom

Hi all.  Welcome back to the Disciplinary Couples Club.  Our weekly gathering of men and women who are in, or would like to be in, Domestic Discipline or Wife Led relationships.
Sorry for the late posting.  I had a short Saturday diversion that turned into a very long one. Earlier this year, I had many months of working weekends.  It's nice, though a little disconcerting, to go into a Saturday without a bunch of work left over from the week.  The late posting may become the new norm, by the way.  Sometimes these posts take longer than you'd think, and I sometimes watch the better part of my morning slip away.  Yet, almost no one posts on Saturday anyway.  So, I may start pushing the posting into the afternoon or evening. We'll play it by ear.

Last week, we talked a little bit about how to judge effectiveness.  That led, perhaps inevitably, into a discussion about the extent to which changed behavior is only part of what we mean by "effective."  As I said in reply to ZM, when we first started DD and for several years thereafter, I didn't really appreciate the "communicative" aspect of DD. Oh, I got that it took great communication to make it work, but it took me a while to really get that the spanking itself is a form of both communicating about a problem and of addressing it. By that standard, it is WAY more effective than the communication we see in many vanilla marriages.  How many marriages fail because they simply drift into both silence and inaction?  One party, or both, may be very unhappy and regularly annoyed, but after a while it just becomes easier to stay silent. So, they do, and from there it's all downhill.  I recently read a book that described the results of such passivity: "Every single voluntarily unprocessed and uncomprehended and ignored reason for marital failure will compound and conspire. . . . All she—he—they—or we—must do to ensure such an outcome is nothing: don’t notice, don’t react, don’t attend, don’t discuss, don’t consider, don’t work for peace, don’t take responsibility. Don’t confront the chaos and turn it into order—just wait for the chaos to rise up and engulf you instead." Disciplinary Wives who are on their game do notice, do react, do attend, do discuss and, most importantly, they make HIM take responsibility.  Even if his behavior remains less than perfect, DD ensures the channels of communication remain open, at least from her to him. 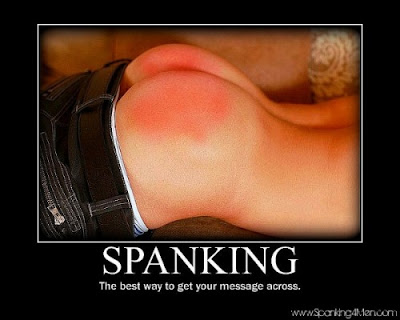 In discussing effectiveness, both ZM and Helen brought up the subject of motivation and commitment.  Not hers -- his.  As ZM put it: "Just looking at outcome isn't necessarily the answer. While ideally discipline would result in immediate and permanent change, some habits, attitudes, or behaviors are very entrenched and may take a significant amount of time to change, and that is of course assuming that the person even truly wants to change."  Similarly, Helen observed: "As others have mentioned, another crucial factor is that the husband has to want to change the behavior. He can want to because it is good for him (like losing weight), he can want to because it helps him achieve his values (such as stopping swearing), he can want to because it pleases his Disciplinary Wife (such as remembering to take out the garbage). But if he thinks there is nothing wrong with the behavior and he shouldn't be punished for it, then being consistently caught and severely punished is probably not going to be enough to be effective."

That all makes sense.  Regardless of severity or certainty of punishment, we're going to do a better of changing our own behavior if we too want it to change; the fantasy of a dominant wife imposing on us only those rules she personally wants notwithstanding.  In our reality, most of the rules my wife imposes were arrived at more or less jointly. 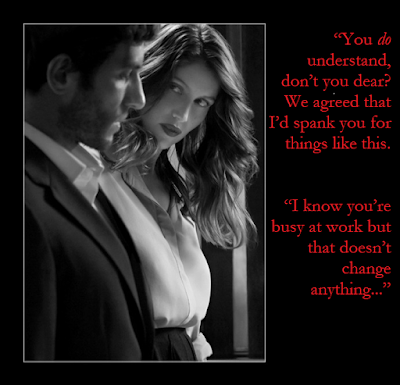 But, there definitely are some that she cares about more than I do.  Or, at least, she doesn't balance pros and cons in the same way I do. The best example is probably drinking.  We both generally agree that over-consumption of alcohol has been an ongoing problem for me, and it does definitely cause some issues from time to time.  But, deep down inside, I'm not really ready to give up the benefits it provides with respect to career development and, frankly, I like socializing and talking and alcohol is my set's social lubricant of choice.  As de Sade put it: “Conversation, like certain portions of the anatomy, always runs more smoothly when lubricated.”  So, when push comes to shove, she may command no more than two drinks, but if the guy across the table wants a third, I'm probably going to have a third. 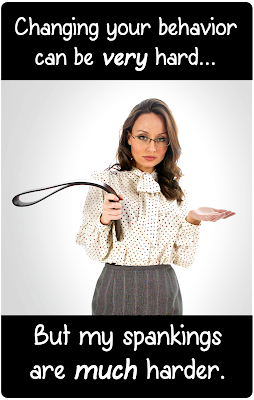 On the other hand, we do have success when she addresses things like respect or work habits.  Because, I do want her to feel respected, and her rising feeling of her own power and authority are attractive and motivating to me.

And, I really do want and need to elevate my game at work giving some of the challenges that are coming up.

Do these examples resonate with you?  Are there some areas where DD has proven particularly effective because her desire for change is in alignment with your own?  Are there others where DD has not been effective, in whole or in part because the change she is trying to bring about is something that you are, deep down inside, just not motivated to do or, worse yet, downright resistant to changing? In those circumstances, has she found ways to motivate you to change anyway?