Don’t do the crime if you can’t do the time.
Hi all.  Sorry for the delayed posting.  I woke up with a cold, but in the interests of full disclosure, I also had a very nasty hangover.  We had a holiday party last night, and a very merry time was had by all.  I'm finally feeling almost human again, so I decided to get off my lazy ass and do some posting.

I'm not quite sure how to characterize this week's topic, but it extends from a couple of comments on last week's by Bart and Alan.  Bart's comment was:

Dan, while we have been married many years and have been engaged in DD before we knew there was a name for this, the conflict between Sylvia and I regarding limits has been an ongoing challenge. While I recognize that initially the punishments were a result of my needs, she soon decided that spankings were effective and useful for her as well. Over the years there have be instances where I have objected to the reason she had given for a particular punishment, and also the severity. I have protested very vigorously to mouth soaping which I hate. In the end I have always submitted and the knowledge that she decides the extent of the punishment has as she posted changed my behavior. It’s not just cursing that brings out the Ivory soap it’s also mean or spiteful dialogue .she has threatened me with a spanking in front of her sister but that has never happened. Alan replied:
That is really where the rubber hits the road, when she punishes consistently as to the behavior and she decides why it happens, when it happens and where it happens, and you realize you really can't stop it. Why was the hardest for me for a long time because I thought we had a clear understanding of what was punishable behavior. True at the theory level but not true at the interpretation level.Over the years I have been spanked many times when I sincerely believed I didn't deserve it.But ironically that is a big part of what makes it work and what I need.At some deep level we are unable to self discipline and so we turn that over to our wives. She decides and I obey and it works. 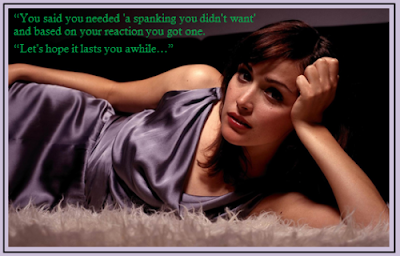 As I replied to Bart:

This comment kind of cuts to the core of what I'm talking about when I draw a distinction between "real" DD versus BDSM with DD trappings. From what you say, you objected to the severity and sometimes the reason, but you acknowledge that the behavior changed. Similarly, you hate the mouth soaping, but it she wants to change the behavior, doesn't it require something that you are truly, genuinely adverse to?
Again, I'm not sure exactly how to label this topic, but something along the lines of, have you had that "where the rubber meets the road" moment Alan referred, to where the punishment became, for lack of a better word, "real," such that it became something you really, truly wanted to avoid?  As most of us who contribute here know, we have some weird attraction to this lifestyle, and most of us literally asked for it.  And, as the caption above says, we want a spanking (or other punishment) that is bad enough that we really do not want it.  Has she taken you to that point -- to the point where you genuinely do not want this thing that you put in motion?  And, has she hit the point Bart refers to, where she decides the disciplining you serves her needs as much or more than hers?

My wife and I have been doing this for a long time.  I don't recall exactly when we started, but it was something like twelve or thirteen years ago.  Yet, it was really only a year or so ago that I feel like we hit both of those points.  The first happened largely as a result of new tools.  For me, it involved rubber hitting not only the road, but my ass. I bought a couple of rubber straps that were just excruciating.  They hurt so badly, for the first time I would really, truly dread what was coming if she ordered a spanking.  She ended up deciding to discontinue using them, because they had too much of a tendency to break the skin. Not in a major way, but enough to bring a spanking to an end before I had received the full measure of punishment she wanted to deliver.  But, the dread remains because she really did crank up the level of her paddling in general.  And, I also ordered some custom made paddles that seem a lot more painful than her old one.

It also seems like her own dedication to Domestic Discipline has increased in the last couple of years, probably because we consciously took things in a more FLR-oriented direction.  I can't say that aspect really took off in a major way, but I think it gave her a taste of real power and control that went beyond merely spanking, and it felt good.

Tell us about your experiences.  Has your DD relationship reached a point where the spankings are something you truly seek to avoid?  And, while we're at it, what about Bart's discussion of mouth soaping?  We have not done that, and I hope she never does.

Have a great week.  Counting down to Christmas! 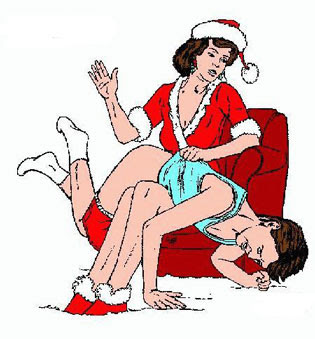 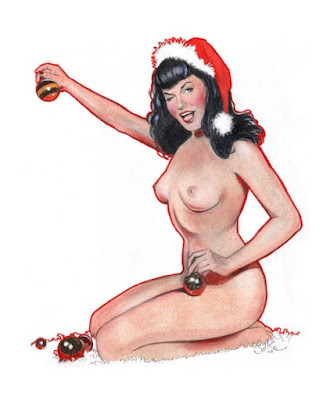