I hope you had a great week.  I came into the week exhausted and am now even more so.  Business travel is just draining.  Unfortunately, none of that time in airports and on airplanes yielded inspiration for new blog topics.  So, I throw in the towel and will once again let someone else do my thinking for me.  A couple of weeks ago “a husband who knows” suggested “corner time” as a topic and suggested some sub-topics.  So, let’s do that one.

Do you use corner time as part of your Domestic Discipline routine?  If so, to what purpose?  Is it always done in conjunction with a spanking, or do you ever use it as a stand-alone (no pun intended) form of punishment?  Do you use it to increase the sense of anticipation and dread of the ordeal about to come? 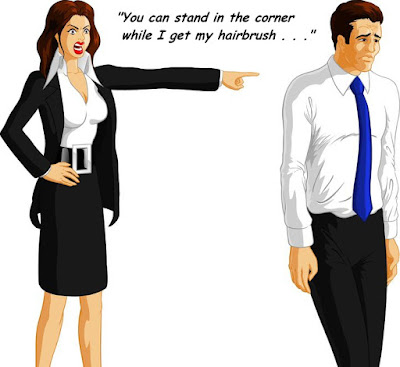 Or, is it an interlude between sessions? 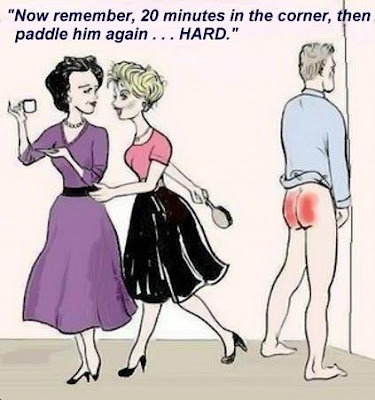 Or, does it typically come after the spanking?  Does she use it as an opportunity to scold or lecture? 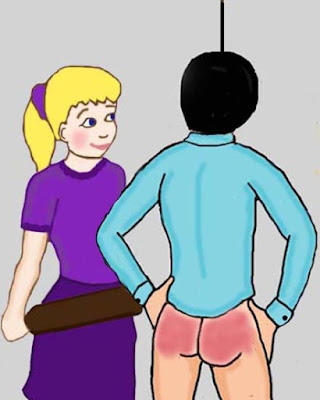 How long do your typically leave him in the corner, and what do you do while you keep him waiting? (This particular piece of artwork comes from our friend KD Pierre.) 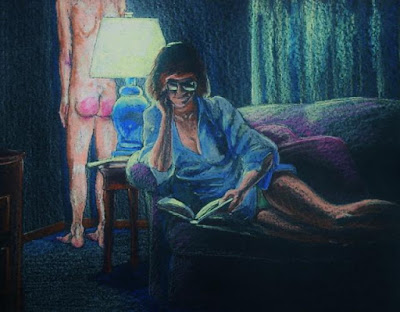 Has she ever taken a phone call while you were standing naked in the corner? If so, how did that make you feel?

If corner time is not part of your domestic discipline routine, is it something you’d like to explore? Why?  What is the appeal, or what is it that you hope it would achieve? 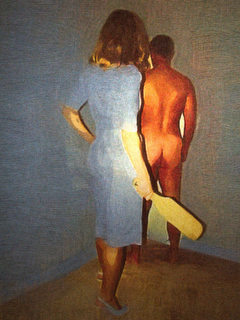 For the wives, does corner time serve any special purpose for you?  What is it you hope that it achieves?  Does making him spend time in the corner enforce your feelings of empowerment or dominance?

You can tell this topic isn’t one that captures my interest, as demonstrated by the fact that the last time I devoted a topic to it was back in 2014.  At that time, I noted that we didn’t use corner time.  That changed a little in the last year, partly in response to a comment from one of our Disciplinary Wives.  She noted that she always tries to ensure that each offense gets its own separate spanking session.  Typically, she would break the spanking event into multiple shorter sessions, with corner time in between.  That approach struck me as potentially helpful in making sure that a husband is always better off behaving than not behaving, because I’d be lying if I said there haven’t been times when I knew I already had a spanking coming, so why worry about behaving better if I was going to be spanked regardless?  So, we experimented with a new system in which each offense earned a minimum of five minutes of spanking time (as measured with an hour glass), with five to ten minutes of corner time between each session.  We haven’t really stuck with it, but I do think the approach has merit and Anne told me she does like it.

For me, the positives of corner time are tied to that particular routine and are about ensuring that each offense gets addressed separately and making it less likely that numbness steps in and makes a long spanking easier to take after a while.  But, for me corner time doesn’t really work as an independent form of punishment or as an anticipation builder.  That’s a little surprising, because I tend to be very impatient by nature.  But, I have also been meditating for so many years, that I now find that standing in a corner for very long results in me slipping into more of a meditative state in which, instead of focusing on the upcoming spanking or reflecting on what I could have done to avoid the one I just got, I tend to think about  . . . nothing.

So, please share the details of your use of corner time, if any.  And, have a great week.
Posted by Dan - A Disciplined Hubby at 10:28 AM