"I can take care of my enemies, but Lord protect me from my friends."  -- Voltaire

Hi all.  I hope you had a great week.  It was an interesting one, on all sorts of levels.  The discussion was interesting, though probably a good reminder to me that, while I reserve the right to post about politics when I feel the need, it probably won't be something I do very often.  And, when I need that outlet, KD's blog almost always serves as one.  Thanks again to him for letting me borrow his artwork.

Regarding the actual topic, ZM wins the prize for most astute observation: "Having said all this, probably most of us are just fooling ourselves anyway, because our very perceptive offspring probably can put together the subtle clues and may be much more aware of our activities than we think they are!" Well said and almost undoubtedly true. 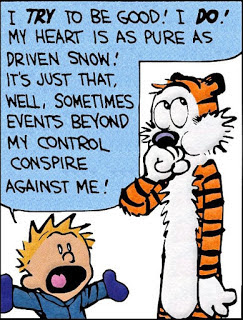 As is all too often the case, I find myself totally worn out on this beautiful Saturday morning, and while it is mostly my fault, not entirely.  Unless peer pressure is just never an excuse and I must be 100% resistant to temptation all the time.

As usual, it all comes down to me liking alcohol just a little too much, and having too many friends who fit in that same category.  I had some mid-week business travel, culminating in a business dinner.  Interestingly, it began with all of us refusing the bread basket at the beginning of the meal based on our low-carb diets, and ended with us demolishing that bowl, and carbs with our dinners, and then dessert!  Along with a bottle of wine.  I suspect sometimes that my fondness for booze really is just another aspect of sugar addiction, and they certainly seem to at least be mutually enforcing.  Unfortunately, the night didn't end there, as I went back to the hotel with the intention of having "a" nightcap.  Then, a work colleague called regarding something we needed to cover.  She too was in a hotel bar, and we ended up having real drinks "together" in the virtual world of a cellphone conversation separated by several hundred miles.  I had to fly again the next day, getting an unanticipated upgrade to First Class, and the flight attendants seemed particularly attentive in refilling my glass.  The net result was total exhaustion and, frankly, one of those "why the fuck do I keep doing this to myself" moments of self-awareness in which I promised to get on the right track and seriously pondered getting started on a belated Sober September, which I understand is kind of a "thing" these days.  And, I really meant to do it.  Then, my wife set up an an unanticipated get together with another couple, at an Oktoberfest of all things, and I'm just not wired to stay perfectly sober when surrounded by a bunch of people wearing lederhosen and carrying tankards of good beer.  Hence, the Calvin & Hobbes cartoon and the qoute from Voltaire.   But, I really do need to pick myself up, dust myself off, and try once more to get my shit together.

Perhaps because my mind is basically jello after several days of abusing myself, but also because finding topics remains challenging, this week's topic is probably one some will find a little boring, but I just can't think of anything more profound or worth covering right now.  And, as is often the case, comments from one week help feed the beast for a subsequent week.  A couple of weeks ago we got off-topic to a discussion of canes (and I have since bought several, some of which may get tried out this weekend).  TommyTucker observed:
"When C canes she invariably dresses in a sleeveless dress or shirt because she has found that a completely bare right arm enables her to swing that cane with no interference from loose clothing. I personally find it very erotic when C dresses in a sleeveless dress on a normal day or evening, because I am reminded of those occasions when that bare right arm has come down hard on me."

Similarly addressing the issue topic of spanking-devoted dressing up by our Disciplinary Wives, ZM discussed his wife's adoption of a camouflage shirt as her signal that a spanking was coming:

"The camouflage shirt was her idea, and it flowed out of us making this an extended boot camp time where she would intentionally be more demanding and significantly raise her expectations. The idea was to make a big deal out of small details so that I would become more conscientious, and hopefully as I learned to take care of small things, some big things would improve as well. We were joking about her being the drill sergeant, and she was like "I have just the thing to wear!"

Once we had ascribed special meaning to that shirt, it suddenly became a very clear signalling device. This has been especially useful during these summer months, when our house has been full. If she walks in the room wearing that shirt, nobody else will notice in the least, but for me, time stops. I then know that I have dome something wrong and she has decided to punish me as soon as we are alone. One additional "benefit" (though I am not really sure it is positive), is that once she puts on the shirt, she is also basically committed because she knows she sent the signal."

For women more than men, clothing really seems to hide as much as it reveals, 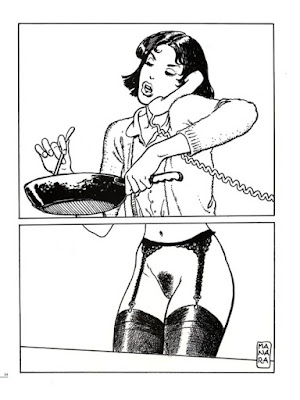 and you certainly cannot judge a book by its cover. 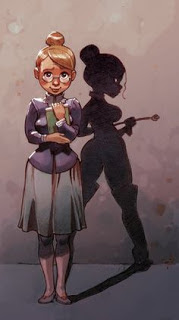 We really don't have any such ritual, though it has been on my mind a lot since ZM brought up the camouflage shirt.  As was the case with for some of us with certain tools, certain aspects of Domestic Discipline do seem to take on a ritualistic significance, and I can see how dressing a certain way could become significant in that way.  And, while we don't really incorporate a particular kind of dressing up into our Domestic Discipline activities, I have noted that when my wife is having particular success in becoming more dominant, her daily dress does become more professional and structured, which I personally love.

Do the Disciplinary Wives adopt any special outfit, whether to signal a spanking is coming or for purposes of carrying out the disciplinary event? Do you find the ebbs and flows of disciplinary dominance are reflected in your partner's dress?
Posted by Dan - A Disciplined Hubby at 9:37 AM