This is my work, there were my thoughts, and thus was I. I have freely told both the good and the bad, have hid nothing wicked, added nothing good. - Jean-Jacques Rousseau

Hello all.  I hope you had a great week.  I'm pretty tired on this Saturday, to a large extent because of way too much workplace carousing.  I seemed to have some sort of workplace social commitment every single night of the week.  So, now I am tried, cranky, facing a weekend of catching up on work, and in all likelihood facing a hard spanking tonight.  And, thanks to recent illnesses and other instances of "real life" getting in the way, it has been a long time since I had a hard punishment spanking, so it probably will be extra excruciating.

Something that happened this week has me thinking again about a topic we have talked about before, though it's been a while, namely sharing more about the disciplinary and spanking aspects of our lives.  I don't want to go into the details, but it involved someone who was placed in a difficult position largely because they were fairly "out" about their spanking-related lifestyle.  It reinforced that there are valid reasons why I am pretty paranoid about maintaining my anonymity and why only a very few people know much about the details of my identity, such as where I live, what I do for a living, or other personal details.

Now, the problem is, I also seem to be going through a phase in which I very much want to have deeper, more meaningful relationships with people, including people who I "know" mainly through this blog or related electronic communications.   I find myself looking for ways to have more meaningful, one-on-one communications that are less topic-driven.  Also, the plain fact is, I have never been particularly good at keeping secrets.  I find myself increasingly wanting people to know about this aspect of my life.  Or, I want certain people to know more about it.  Moreover, as my wife and I continue to talk about cranking up her level of dominance, I am constantly reminded of how hard that is without putting it on more open display, and the part of me that was fascinated by DD from the moment I first encountered it also seems to gravitate toward being more openly subject to her authority.  Or, maybe it is just that I want that authority to be more pervasive and more consistent, and I know deep down inside that the only way to do that is for her to put it on more open display.

There also was an anonymous comment last week from a woman who learned that her mom spanked her father, because her mother told her about after she was grown.  My wife is very, very close to our kids who are themselves now young adults to various degrees, and I will not be at all surprised if at some point they have an adult conversation about this aspect of our lives.

As I said, this week's topic is not original, but it has been on my mind again, this issue of how much we reveal about this thing we do, to whom, and under what circumstances.

To my knowledge, there are two people who know who I am and that my wife gives me real disciplinary spankings.  One is a friendship with another DD blogger.  We started corresponding with each other and over time we developed enough mutual trust that we were comfortable revealing who we were. The other is a mutual friend my wife and I have known for many years.  The original connection was through me, but she and my wife also got close over time.  I have told this story before, but I'm having a hard time finding it right now.  It's surprisingly hard to search 239 other posts.  The short version is, I had been friends with this woman for a number of years.  After several years of working together there really was very little we didn't share.  One day we were having a few drinks at happy hour, she asked how my wife was doing and how things were going for us, and I found myself blabbing to her about this new lifestyle we were exploring.  I can't say I wasn't embarrassed talking about it, though this friend is one of the least judgmental people I've ever known, so I was really more embarrassed by the kinky nature of the activity and my male reticence to talk about such things openly than out of fear that she would judge me for engaging in it.

After I confessed to this friend, I also confessed my confession to my wife.  She was a little shocked at first but seemed to roll with it.  I learned just how much so a few weeks later.  They had gone out to some event together, and I got a call from my wife.  They had clearly had a few drinks over the course of the afternoon, and my wife had the call on speakerphone.  We chatted about what they were doing, whether the event had been fun, etc., then as the call was wrapping up my wife announced, "By the way, when I get home you are going to get you ass blistered for . . ." and started listing off my bad behavior. 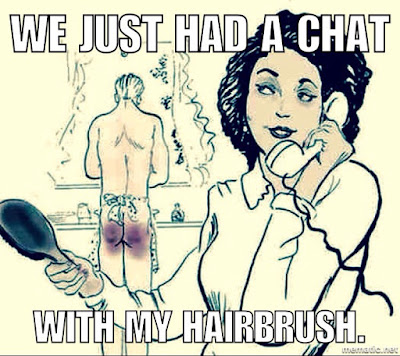 Needless to say, I was mortified.  She, on the other hand, was having a ball.  "Yes, dear," she chortled, "since you decided to open your big mouth about our private activities, I decided that K. should hear the whole thing from the wifely perspective.  We had a fun afternoon talking about how much I enjoy warming your ass when you've been bad."  I probably would have been even more mortified were it not for the fact I had, in fact, initiated this little "sharing" exercise, so I could hardly object if my wife chose to take it to the next level. 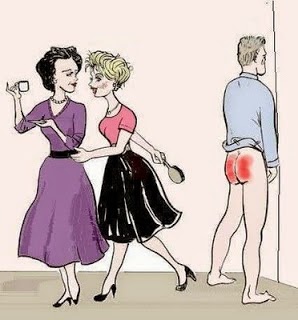 But, as far as I know, after well over a decade of doing DD, those two people are the only ones who know that I am a disciplined husband.  I haven't told any other friends or relatives and, as far as I know, neither has my wife.  And, other than hat one afternoon, I don't think my wife and our mutual friend have talked about this lifestyle, as we don't see each other all that often these days and when we do it is often at parties with lots of other people around.  And, while I admit that I increasingly have these desires to "out" myself, some of my desire to be more open is driven by a wish that my wife had a relationship with at least one other Disciplinary Wife, so they could share notes and reinforce their growth as dominant women.  But, as KD and I recently discussed, I'm not sure that women or "tops" need that as much as I sometimes like to think.  On the other hand, I do increasingly feel a need to have a more "real" connection with disciplined husbands including some of the regulars on this blog.  But, I have yet to find a vehicle to really facilitate that.  Only time will tell . . .

How about you?  Our friends KD and Merry are obviously very "out" but how about the rest of you?  How many other people, if any, know about you giving or receiving real disciplinary spankings? If you are willing, please give us some details about how the "outing" happened.  Who was it to?  How did you tell them, or how did they learn about it? What was their reaction?

Have a great week.
Posted by Dan - A Disciplined Hubby at 9:38 AM