I think every girl's dream is to find a bad boy at the right time, when he wants to not be bad anymore. - Taylor Swift


Hello all.  Welcome back to The Forum.  Our weekly gathering of men and women who are in, or interested in being in, a Domestic Discipline or Female Led Relationship. I hope you all had a good week.

We had a good discussion last week, don't you think?  We got some really interesting comments on when punishment is likely to work and when it may not.  I really liked this observation by ZM: "In short, I think punishment will modify behavior if it makes the risk/reward ratio of the behavior unfavorable."  It seems so obvious, yet there is a very elegant wisdom to it.

A couple of weeks ago, GeorgiaFella made posted this comment: During punishment spankings for being neglectful, or through preemptive spankings designed to help keep me "good," I never cry (and, yes, the spankings hurt plenty!). But my voice does revert to the remorseful, submissive tone of a little boy as I repeatedly and sincerely AGREE with her criticisms by timidly voicing a long series of "Yes, Ma'ams," and "No, Ma'ams." So, by being reduced to a boy, I am restored as a man. And my wife's "tool of restoration" just happens to be a very reliable pine paddle featuring at least two dozen airflow holes!). There's something very powerful about motherly care. My little boy feelings and responses come very naturally and immediately as she escorts me by my ear to the bedroom. It took a long time for her to embrace her role as a spanking wife, but when she finally got that she can inflict pain within the context of motherly love, it all clicked for her." 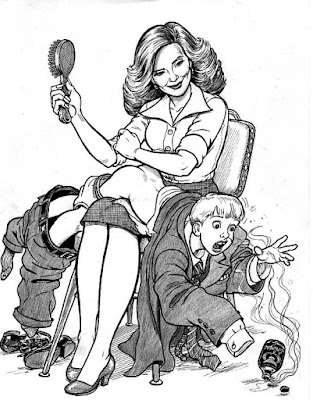 I know this topic may make some squeamish, but I think it's still worth exploring a couple of aspects of it.  First, do GeorgiaFella's comments resonate with the Disciplinary Wives?  Is there a "maternal" aspect to wielding your Domestic Discipline authority?  Or, is the idea of being maternal toward your spouse a turn-off?

For the men, do you see any aspect of the maternal influence in your desire to be disciplined by a strong female authority?  Growing up, was your mother the disciplinarian?  Do you think that has anything to do with your DD desires today?  And, what about the idea of being reduced to a "little boy" during a spanking?  Does that concept resonate for you?

For me, there are times that the idea of a DD wife as the "strict mom" I really didn't have does resonate.  But, I don't think that, at its root, it's about the maternal aspect.  Rather, it is about wanting an authority figure--any authority figure--who sets the rules and enforces them consistently and who has sufficient "executive presence" or other power or authority that the punishment is inevitable and resistance futile.  While the "strict mom" archetype serves that role, so would an aunt, teacher, school principal, or any other authoritarian whose power or position was sufficient to make me submit.

Now, my wife seems to share some of the proclivities of GeorgiaFella's wife.  While we haven't talked about it in detail, from time to time she talks about using DD to reduce me to a "teen-age boy who needs a spanking from his mom."  She has compared me to a teenager who mischievously pushes buttons just to do it, then acts surprised when she gets fed up and does something about it.  As I said, we haven't talked about it in detail, but I do get the sense that she does cast her disciplinary role in a somewhat maternal light.

I hope you all have a great week.
Posted by Dan - A Disciplined Hubby at 7:52 AM