Hello all.  I hope you had a great week.  Last week, I warned that I might not have much time to post over the coming weeks.  Then, suddenly, the frantic pace just stopped, very unexpectedly.  Which is always a little disconcerting. It's like my body came to a sudden stop, while my mind continues racing head.  But, it's all good.  Or it will be.  I really was on the edge of burnout, and now I have a chance to take a breath.


It's also yet another chance to get "back on track."  It's funny how thoroughly "real life" can intrude on our best laid plans.  It was only a few weeks ago that we  entered into a "contract" that required us both to step up our DD commitment.  Then, work commitments and travel kicked in with a vengeance and it all just fizzled.  But, now we have a chance to restart that, realistically, was not going to happen again for another two or three monts.

Unfortunately, while I do now have the time to post, the slowdown happened so unexpectedly that I didn't have much time to think of a topic, so I'm kind of winging this one and will keep it short. 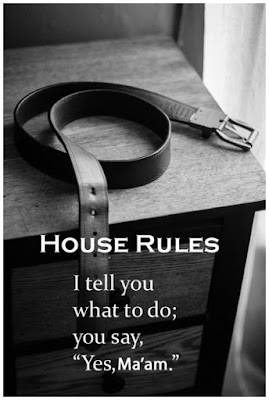 We've had a few topics recently on rules and expectations.  One we didn't talk about is, are there any rules that are imposed on you that you really don't agree with?  Do you get spanked for anything that you think should not be spankable?  While we talk about putting our wives in charge of disciplining us when we break the rules, doesn't real authority lie not in being the person who enforces the rules but in being the person who makes them?

In my own relationship, I can't say there are many ongoing rules she has imposed that I don't agree with.  The closest we've come is probably around orgasm denial.  She very recently announced that there are to be no orgasms that she is not a part of.  I know some men in these relationships are into orgasm denial or control.  I've never been one of them.  But, I can't tell her that I want her to make rules and boundaries, and then undermine her when she steps up and makes one of her own.  One other example is really more a matter of degree.  We both know that I have a tendency to over-indulge in alcohol as a function of work.  Sometimes its developing business.  Sometimes its team building.  I often find that a real conversation and real relationship building takes about three beers.  She prefers to set the limit at one or two.  So, it's so much that we disagree on the rule itself but, rather, the threshold at which it should be applied.

What about you?  Are there rules she imposes that you would prefer did not exist? Do you ever get spanked for things you think should not be punishable?

I hope you have a great week.
Posted by Dan - A Disciplined Hubby at 10:39 AM