“Nothing quite encourages as does one's first unpunished crime.”- Marquis de Sade

Hello all.  Welcome back to the The Forum.  Our weekly gathering of men and women who are in, or interested in being in, a DD or FLR lifestyle.  I hope you all had a great week.

I'll begin by admitting this is one of those weeks I am feeling kind of lazy and uninspired.  I get the feeling that some others feel the same way.  Participation seems to have tapered off a bit, other than the guy I have decided to call OCD Boy who keeps sending me comments about his wife/mother/girlfriend leg locking him during a spanking.   I strongly suspect it is the same OCD Boy who was previously all about his Mother-in-Law, since both seem to have this thing about being made to stand facing a wall.

So, since I am finding a don't have anything in particular I want to say this week, I'll try to recap and extend some themes from the last couple of weeks, and maybe just share a bit more about where my own DD relationship is these days.  When I look at where the conversations have gone, and where I am mentally and emotionally right now, I see a theme emerging around "reality."  Confronting it, managing it, and giving in to it.

A few comments last week touched on the trade-off between making spankings and punishment quick and easy versus making them meaningful and communicative. On one hand were Marissa and Anna who argued that DD takes time and attention if it is to work.  On the other hand you had Darren and me, who did not disagreed but pointed out how insanely busy and distracting ordinary life can be and the extent to which real life can get in the way even for couples who have the best of intentions.  Our concern was that if we make the spanking or punishment event too long or intricate, it is less likely to happen at all.  Marissa and Anna rightly point out, however, that ritual and duration have important roles to play in bringing home and reinforcing the reality of the relationship and of the punishment itself.

On a personal level, I came into this year thinking that, given some changes in our family arrangements, we might have more time to really focus on the DD and FLR aspects of our relationship.  It has not been the sea change that I anticipated, though we are finding a little more time alone for her to deal with issues.  We also did start trying to implement a daily reporting scheme with more immediate "on the spot" spankings, in order to try to uproot some chronic and long-running behavioral problems.  Real-life almost immediately got in the way, however, with me having a series of business trips and my wife having some of her own work distractions.  Setting those challenges aside, however, I am also finding that this idea of daily check-ins that could, if my behavior does not improve, also result in daily spankings, is very intimidating.  Particularly in conjunction with her proclivity for spanking "all out" every time, and with some newer tools that are just incredibly painful.  I am finding that even though I bought those tools with the express intention of ramping up the pain associated with each spanking, and even though I suggested the increased frequency of checking in and spanking to root out the really resistant behavior, I am really struggling to comply fully, with the struggle playing out in how reliably I self-report bad behavior.

Now, I know this is going to bring a hailstorm of criticism raining down along the lines of "If you are not going to submit, then what is the point?"  As I've said before, very easy to say if you are just naturally submissive and compliant, naturally well-behaved for the most part, or if your wife does not spank that hard.  If you happen to have that special combination, however, of stubbornness, willfulness, chronic bad habits or a job that seems to require or encourages certain excesses -- together with a wife who spanks very, very hard -- then something has to give and the temptation is often there to see what you can get away with.  Ideally, what would give is the bad behavior, but I'm finding that it is easier to just kind of slack on the self-reporting and hope that the distractions of our daily life keep her from focusing on my reporting or lack thereof.  It's also just been a particularly hard time to comply with an increasingly strict set of commands, in part because of the work travel I referred to.  It's easier for me to adjust my behavior when I'm just going about my regular job, but traveling very often involves work-related dinners or drinks and long hours, resulting in too much socializing and too little sleep, which makes it more likely that I will skip working out and eat bad food, etc.  One break in the chain of good habits leads to back-sliding in a whole bunch of areas.  That is really what happened this week.

The bottom line is, I know that I deserve one, but I also know I really don't want one and would strongly prefer to get away with something. As I said, I know this is going to lead to the usual chorus of "You just need to submit."  I don't really disagree with it. I know I deserve to be spanked, and I know I just need to take my medicine. 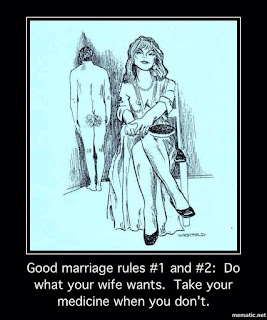 What I am pointing out, however, is that it is sometimes easier said than done.  And while the resistance is undoubtedly counter-productive, in a sense it confirms that we are on the right track.  Because, the resistance and desire to avoid punishment really kick in only once a Domestic Discipline relationship becomes "real," in the sense that it is no longer about some quasi-erotic kink and is really about being punished hard enough, long enough and often enough that he really hopes it will not happen.

If anything, when I get to this point sometimes where it all does seem too hard to handle, it shows that we are getting to the kind of Domestic Discipline relationship we have said we want, i.e. real punishment that is designed to change behavior, and not just some kinky game in which there is a perverse desire to do things to get spanked.

I hope people will share a bit about their own experiences when it became real or about how hard it it sometimes is to accept that new reality.  When the Disciplined Husband realized the reality of submitting to real spankings.  When the Disciplinary Wife accepted that she had real power and real responsibility.  Also, I would still like to spend some time on this consistency theme.  What have couples done to ensure that spankings do happen as regularly as warranted and that all those "real life" distractions do not get in the way of a "real" disciplinary relationship.

As always, if you are new to this Forum, please take a moment to drop by the Guestbook  (see tab above) and tell us a little about your DD or FLR lifestyle or aspirations.