"That was what he wanted. For somebody to tell him 'No.' To have somebody lay down the law, set the limits, give him something solid to stand on. That's what we all want, really.” ― S.E. Hinton

Hello all.  Welcome back to The Forum - Disciplined Husbands & Disciplinary Wives.  Our weekly gathering of men and women who are in Female Led Relationships or into Domestic Discipline. Thanks for joining us.

I decided to get an early start on this week's topic, as I may be off-line much of tomorrow.  Also, it felt like this week's topic had run out of gas, though I do want to thank everyone who participated in it.  We didn't succeed in getting a whole lot out on the table regarding what men can do to show their submission in order to encourage their wives to take charge, but there were some nuggets in there.  I'm also not sure whether I did a good enough job of explaining what I was looking for, which seemed fairly simple to me at the time: namely, whether men have ways of showing their willingness to be led before expecting her to just take a strong lead.  It was really about, what can we as disciplined men do to help build up our wives' confidence even if, in an ideal world, we would prefer that they take command and impose their will without us having to prod things along with things like suggesting a spanking might be appropriate or acting submissive such that she takes it as a cue to lead.  Anyhow . . . best laid plans.

I will say that sometime in the near future, you can expect me to do a topic going off again on the whole "topping from the bottom" thing, as it once again came up and seemed to generate more heat than light.  I am more and more convinced that it is like one of those non-indigenous weeds or snakes that gets let loose in a new environment and wreaks havoc on the eco-system.  I'm obviously analogizing to what happens when we import concepts from one kink--in this case BDSM or Femdom--into something different (DD) that may not have the same goal or purpose.  I don't think there could possibly be anything more destructive to a budding DD relationships than the suggestion that there is something wrong about communicating what it is you need and what it is you are hoping DD will do for you, whether as the spanker or spankee or letting your partner know what is and is not working.  I know that "topping from the bottom" is not necessarily incompatible with open communication between couples, but it is just so easy to apply it in a way that shuts down communication, in the DD context it just seems to be way more trouble than it is worth.  Anyway, enough of that.  Onward.

During the course of last week's conversation, Marisa made the following point in response to a very thoughtful comment about confessing one's transgressions and failings:

"I am not Catholic ( Jay is) but I LOVE confession. I am not talking about the contrived " mommy I was naughty" version designed to get a spanking, but the sincere heartfelt admission of guilt and acceptance of penance. This is very hot for a dominant woman (maybe even a vanilla woman).  I believe it taps deeply into our nurturing nature as well as the penance giving role so natural to us."

I want to follow up on her "nurturing nature" and "penance giving role" comment.  Another word for what I think she may have been getting at is "mothering."  Now, I am coming at this topic with a lot of trepidation, because I absolutely do not want to open the door to a bunch of "I love it when Mommy puts me in diapers . . ." stuff from "Anonymous" in all his permutations.   While whatever people want to do in the privacy of their own bedroom is up to them, some of it is beyond the scope of this blog. (Though, I will admit some it reflects your blogger's personal comfort zones.   I read recently that Mike Pence refers to his wife as "Mother." Totally creeped me out.)  So, like I said, I hope I am not opening up a big can of worms here.  But, I actually have been thinking for some time about doing something here about whether "nurturing" and "mothering" are an aspect of DD and FLR relationships for some couples or are part of the mindset that makes or keeps either party interested in DD.  It has been on my list for awhile, though I did keep shying away from it. But, Marisa's comment seemed like a good opening to do some tasteful exploring.

In addition to Marisa's insights, I can think of two separate incidents that got me thinking about this.  First, several months ago I mentioned that I had listened to some lectures I found on-line from a professional disciplinarian who also promotes herself as a "spanking therapist" specializing in adults with spanking fetishes.  She opined that many adult men and women who crave real disciplinary "to tears" kind of spankings who grew up in chaotic homes with few rules, or where the rules were inconsistently enforced, and it left them feeling insecure, guilt-ridden, etc.  As adults, they crave the structure and boundary-setting, and consequences for misbehavior, that they did not experience growing up.  She referred to adult spanking in that context as almost a form of "re-parenting."

Second, in my own DD relationship we had never, until recently, even alluded to any "mothering" aspect. And, honestly, if I had ever thought about it I probably would not have brought it up, because I suspect there are many women who might be open to DD but definitely do not want it to be associated with mothering or treating him as a "little boy" and I assumed my wife might have the same adverse reaction.  A few months ago, however, I said something about how I felt like her bringing a very strong and stern demeanor when she was in the course of ordering or delivering a spanking was important, because of the vulnerability and greater sense of genuine regret and accountability it fosters. I told her that I wanted to experience that "healthy fear" more often.  I gave her the example of a stern teacher, and she responded with something like, "Or, like a boy who is about to get a very sound spanking from his mother."  Since then, she has made a few comments along those lines -- that part of me wants to be disciplined in the same way it used to happen to misbehaving boys from a strict mom.  Instead of reacting negatively to the mothering metaphor, she seemed to gravitate toward it in some way. 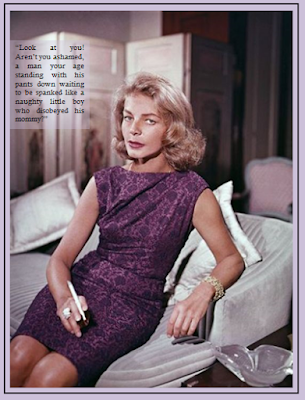 It isn't all that easy for me to admit, but some of that imagery does resonate for me as well, though I do think it has more to do with wanting to be subject to control by a strong authority figure than with "mothering" per se.  A mother could fill that role, but so could a teacher, or a strict aunt (or uncle, for that matter).  But, I do think it does have something to do with someone having that kind of actual authority and sufficient physical or positional power, to make a spanking happen when a rule is broken. 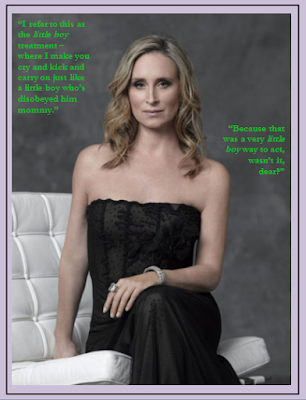 For me, I'm not sure it is linked so much to the disciplinarian's age and accompanying authority, as to my lack thereof.  It is about the feeling of lacking the ability to resist that we felt if subject to corporal punishment growing up.  As an adult, I always kind of know that even if I have committed to being spanked whenever she orders it, if I wanted to resist, I could. It's not like that when we are younger, right? If punishment was ordered from an adult, whether at home or school, it was going to happen. That sense of inevitability -- that it is going to happen period and without any chance of getting out of it -- definitely is part of the morbid attraction DD had for me from the first moment I read about it.  And, I feel it now more than a decade later as I write this post.  It gets my butterflies going in a way that most other topics just don't. "Tears" being probably the only other one that has the same level of fascination all these years later, and I think the two are inextricably linked for me on some level.

Anyway, let's explore this a little.  Does mothering or parenting or nurturing play any role in your DD or FLR lifestyle or in your motivations to give or receive discipline?  Or, perhaps some vulnerability we had growing up that we want to tap into again?  Or, her ability to make you feel weak in the knees, like a boy caught doing something especially bad, when she gives you an especially tough lecture?  For the wives, does the "mothering" or "nurturing" aspect of your personality play any role (positive or negative) in your desire or willingness to be a disciplinarian? Marisa also referred to "the penance giving role so natural to us."  Is that a natural and overlooked facet of many women and mothers?

I hope you all have a great week.  If you are new to this Forum, please take a moment to stop by the Guestbook (tab above) and tell us a little about yourself and your DD or FLR lifestyle or desires.