To be accountable means that we are willing to be responsible to another person for our behavior and it implies a level of submission to another's opinions and viewpoints." ― Wayde Goodall

Mine was OK, if a little frustrating.  We had something go wrong at the house.  It wasn’t a huge catastrophe, but it required getting services from a few different vendors, and it all had to be coordinated.  I was really surprised, and more than a little pleased with myself, that it all seemed to come together miraculously, and suspiciously, easily. Then, it all kind of fell apart, with two of the initially responsive vendors more or less ghosting me for several days, which is kind of a common issue in our community.  It wasn’t a huge problem, but annoying nonetheless and frustrating to schedule around.  I guess I should have kept my expectations a little more reasonable. 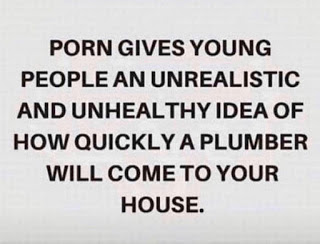 It also was a frustrating week on the health and fitness front. I talked last week about the behavioral fail that earned me a good, hard spanking (more on that in a bit). 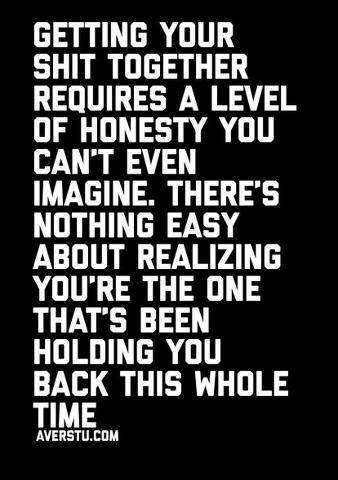 After that fail, I kind of got my shit together and had a really good week in terms of diet, working out and, at first, on weight loss.  I put in hard workouts every day, with the exception of one planned recovery day, and I stuck to my dietary plan pretty strictly.  I also added some additional cardio, even though I fucking hate cardio with a passion.  At first, it all seemed to be working. I got within striking distance of a soft weight loss goal I’ve had in mind for a while, and I was pretty excited about that. Then, all the progress just kind of stopped.  No matter how hard I worked out or how strict I was on the diet, I just couldn’t get the damn scale to move.  In fact, by the end of the week I was one pound heavier than the week before!  My reaction probably says something unflattering about my psychological makeup.  Instead of doubling down on the diet and exercise, I got pissed off and decided I was going to eat anything I fucking well pleased all weekend.  Not looking forward to getting on the scale tomorrow.

Speaking of that spanking after last week’s fail, it was one I was feeling for a good long time.  That surprised me a little, since it was an OTK spanking with a brush, even if it was a bath brush. I’m not exaggerating when I say I was still feeling very tender four days later, and I could still feel some of the deeper soreness after a full week. 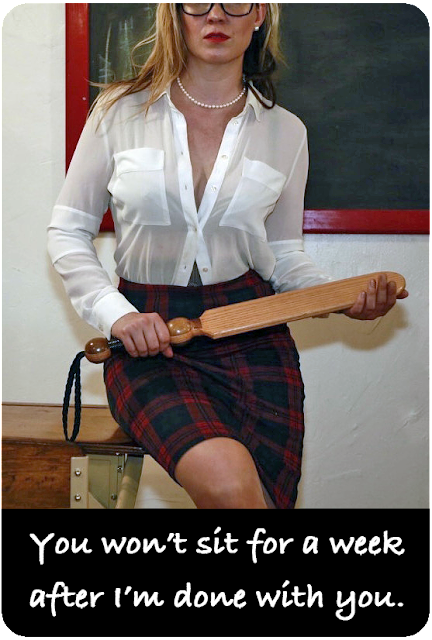 Glen asked how I rate the effectiveness of Anne’s brushes. There’s not a simple answer.  If used very vigorously, I think the hairbrush hurts at least as much as the bath brush in the moment, probably because the business end is smaller, so the impact is more concentrated.  But, the bath brush unquestionably resulted in longer lasting, deeper soreness.  By the end of the spanking, the bath brush was causing some numbing, but in fairness it was a longer spanking than she has given me with the hairbrush.  Finally, Anne has also mentioned how much she likes a very nasty, short leather DWC “paddle” with holes.  I hate the thing. It is far more wicked than it looks, and its end has a way of finding the inside of the crack between my cheeks resulting in a really unique and excruciating sting. While she hasn’t done so, it is short enough that I’m sure she could use it OTK.

Thanks for last week’s discussion on disrespect, fairness and openness.  One theme emerged that I’d like to follow up on a bit.

On the issue of fairness, Spanked Cowboy noted:

“At the onset, during agreement drafting time, it was agreed that she would have uncontested control over discipline. When she determines discipline is warranted there is no debate.”

It sounds like many of us have more or less the same agreement or understanding, i.e. that the wives have the discretion to spank for anything they think merits it, yet it also seems to be the case that many of them struggle to use that discretion.  They do fine with concrete things like spanking for missed chores (see Caged Lion’s comment) or when there is something like a checklist involved (see ZM’s comments about their bootcamp check-ins with clearly defined targets.  But, they seem to struggle more on judgment calls like whether a particular instance of disrespect or attitude crosses a line. 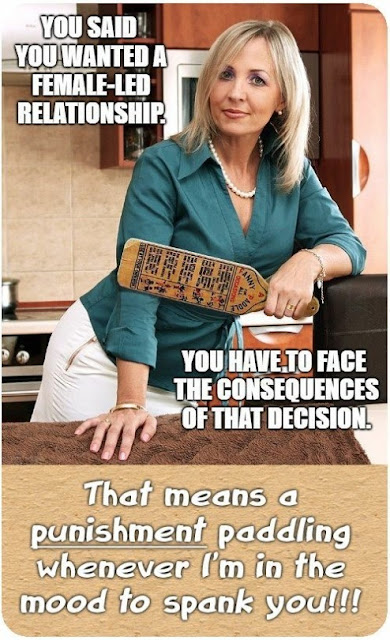 For the wives, I’m curious, do you agree that being a disciplinarian is easier if there is less discretion involved and the spankable offenses aren’t subject to your interpretation or judgment? Or, are you more comfortable with discretion and calling it like you see it? 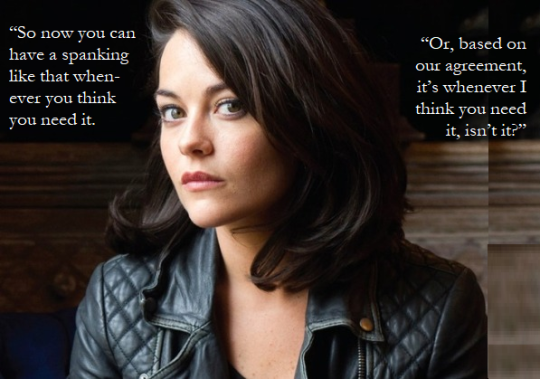 On the issue of openness, by coincidence, I read an article this week on Medium about going to a kink party and how freeing it was for the author.  She talked about how society’s aversion to things like public displays of affection allows others to set the bar on our personal choices around sexual freedom, or at least when and how we express it.  In discussing where one draws the line, she drew a distinction that I thought was kind of interesting, contrasting to teenagers she saw making out on a train with a guy staring at her while masturbating.  In her mind, the distinction hinged on the extent to which she was being brought into a sexually explicit scenario without her consent.  As she put it, with respect to the guy masturbating, it made her feel “like a pawn in someone else’s exhibitionist fantasy. I don’t want to be part of someone else’s sexual experience without being asked if I’m okay with it first.” But, with respect to the teenagers making out, “I did not feel implicit in their experience — I was just a bystander. I did not feel I was part of the sexual act, being brought in against my will.”  https://medium.com/monogamish/we-went-to-our-first-kinky-party-and-it-felt-like-freedom-d066e22f58c4.

I wonder whether an overheard spanking, or one seen through an open window shade, could be seen the same way?  If your neighbor just happens to overhear a spanking, they be uncomfortable, but you didn’t try to bring them into the act in any way or make them take part in something. Rather, you just weren’t particularly worried about their wounded sensibilities if they happened to overhear.  On the other hand, if you gave a spanking in the woods on a busy trail hoping that someone else would come along and witness your kink . . . . That does feel more manipulative, more intrusive somehow.

I also really liked ZM’s observations regarding the connection between openness and ego:

I think that openness ties in perfectly for dealing with disrespect which comes from excessive ego. If too much ego is the problem, then the cure would not just be a bruised bottom, but also a bruised ego. I am not talking about being brutally humiliated, but rather being taken down a peg or two. And while this can happen in private, it would be much more effective if accompanied by the embarrassment of others knowing that it was happening, especially in those cases where the victims of the disrespect are the ones who hear about the consequences. It would be very impactful if others knew that my wife punishes me for things between us, but I can’t even imagine what it would feel like if I was being my usual loud, cocky self and suddenly my wife announced to the very people I was showing off to that I am going to be spanked.

While I know I would be mortified were Anne to actually do something like that, ZM is undoubtedly right that my disrespect issues do result from an abundance of ego, and the most effective solution probably would be aimed directly at that ego; at, as he put it, taking me down a peg or two.  It’s a possibility that I think my subconscious clearly gravitates to and is repulsed by. As I’ve discussed here before, I haven’t had spanking dreams very often, but when I have they have tended to involve things like being taken out of a social or work event, with everyone knowing I am to be spanked.  Or, my mother pulling over a car to the side of the road to spank me, where anyone driving by could see.  Whether anything like that will ever happen, I don’t know. But, it’s certainly food for Anne to think about.

As you may have noticed, I didn’t really assign a topic to any of the above.  I’ve obviously been struggling to come up with topics lately.  But, during those periods when I’m not feeling inspired by anything in particular, there often still are thing going on that I might feel like relating to others or mulling around collectively.  So, I may try free-forming it for a while and see where it leads. . .