“Age is a very high price to pay for maturity.” - Tom Stoppard

I’ll start out with a bit of apology. I know I haven’t been engaged with the blog very much over the last few weeks.  I wish I had an excuse, but I really don’t.  After we got back from our vacation, I just kind of lost interest in all things Domestic Discipline. 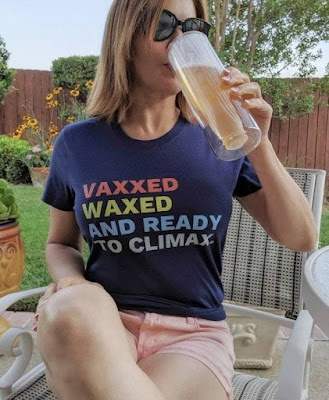 In addition to the (pleasant) distractions of travel and being busy with the typical summer stuff, I think my DD interest got caught up in a hormonal downdraft that affected my libido in general and my spanking interest in particular.  This has happened before, and I think I now have a better understanding of the likely cause.  Several months ago, I got a bad cholesterol test – bad to the point that I needed to get it under control or go on statins.  Fortunately, I was pretty sure I could get it under control because it was the not-so-surprising result of some dietary changes I had made late last year.  I had added a lot of eggs and red meat into my diet in order to try to add back some muscle as I was recovering from a surgery last year that, along with the underlying physical problem, had caused me to lose a lot of muscle mass.  So, after several months of that probably unhealthy but undeniably delicious cholesterol fest, I reluctantly got rid of eggs and bacon and cut back on read meat.  After eliminating eggs and breakfast meats, I kind of drifted into intermittent fasting, skipping breakfast most days and not eating anything until lunch.  It worked like a charm.  My cholesterol plummeted, and my bodyfat dropped pretty substantially.  But, after a few months, I found I just wasn’t feeling great.  Low energy. No libido.  The same thing happened when I tried intermittent fasting for weight loss a few years ago.  I’ve now educated myself a little more on dietary fat and now understand that while cholesterol and saturated fat get bad raps, they are absolutely necessary for testosterone production and cellular repair.  I suspect that I eliminated way too much fat and cholesterol and it played havoc with my hormones, particularly testosterone, which in turn led to a plummeting libido.  So, I’ve added beef and eggs back into my diet, and I’m a much happier camper.

Thanks to those of you who kept the discussion going a bit while I was being lazy.  Regarding the discussion about Belle, I think Alan best summed up my thoughts: “[I]f the frauds are the price we pay for real discussions by real women – it is a price worth paying.”  While I’m obviously not happy with “Belle’s” behavior, I think any cure I could come up with would likely be worse than the disease.  Danielle voiced concern that all “women” commenters would now be subject to suspicion, and I definitely won’t be going in that direction.  As I said a couple of weeks ago, “Belle” wasn’t the first imposter and won’t be the last.

On a point more related to this week's topic, Danielle noted: “Most of the pictures Dan posts show women who are 30 or even 40 years younger than me. If some of the men here have associated me with images like that, I have been guilty of not minding.”  Honestly, it hasn’t been a conscious choice on my part. There just aren’t all that many pictures/drawings out there of older spankers (or spankees).  But here a few I’ve acquired over the years: 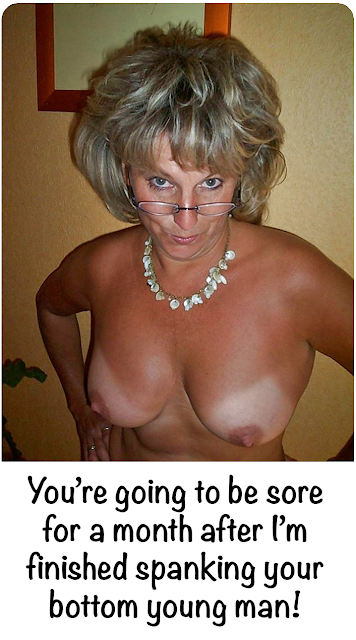 I truly find some of these more attractive and stimulating than posed air-brushed models.  Though, I’ve always been open about the fact that as far back as high school, I’ve had a thing for assertive older women.

In addition to the aesthetic appeal of older spankers, it may (or may not) be that they are more true to how DD works in real life.  Several of our commenters postulated that interest in “genuine” Domestic Discipline seems to be correlated with attaining some minimum level of age-based maturity.  Here are excerpts from a smattering of those comments:

Alan: Most if not all of us actually in a DD have learned that a woman usually requires some maturity (say early to mid-40’s and up) as well as a long term committed relationship –before she becomes seriously invested in DD. Since the long running Belle narrative has now been moved from the serious non-fiction section to the frivolous fantasy fiction section, the generation question remains open.

Danielle: Like Alan, I found Belle's purported age interesting. Alan's point about most women being unwilling to consider DD until they reach a certain age was certainly true for me.

Al: I once saw a quote somewhere that said that "kinky' women were subs in their 20's, switches in their 30's, and dominants in their 40's. And we actually had a "kinky" friend for whom this exact scenario played out. And it is interesting that the dominant phase correlates with our observations as to when most women tend to be willing to become disciplinary wives.

ZM: I know that for me (in my late 40's at the time) it was much easier to share what I really wanted than it would have been when I was a young groom many, many years ago. Also, I was able to introduce it early in the relationship, which I think was probably much easier than springing it on someone that you have been with for many years. Finally, for young married couples, there are just so many things going on in life and so many things that cause momentary disruptions (and shifts of perceived power) that maybe would interfere with things? Anyway, just my thoughts.

So, is it true that Domestic Discipline usually doesn’t kick off—or at least doesn’t get serious—for most couples until they are in their forties or later?  Was it indeed a tip-off that Belle was supposedly relatively young yet seemed to take to DD like a duck to water?  My instincts tell me that those who voiced that such opinions are right, yet my own experience doesn’t really seem to verify it.  I don’t remember exactly when we started DD, and I’m kind of a reverse-savant where dates are concerned, but I think my wife was about 32 when we started and I was about 37. (Yes, it is the case that while I've always had a thing for older women, I married a younger one.) Similarly, two women (one a “top” and one a “bottom”) who I’ve gotten to know through the blog both seem to have been in their early 30s when they got started.   While Alan was on board with the idea that interest in DD usually starts later in life, he also noted that the woman who introduced him to DD was only in her mid-thirties.  I believe ZM also has noted that his wife was relatively young when they started.

So, at the risk of asking people to restate or expand on a topic they introduced last week, does real adult discipline usually start in the 40s and 50s?  If so, do you think the recipient’s interest usually starts earlier but they just don’t get up the courage to ask for it until they hit middle-age?  In that vein, both Alan and ZM observed that it is much easier to introduce DD early in a relationship than to spring it on someone you have been with for several years.  All I can say about that one is that for me it wasn’t an option, as I simply didn’t have that interest in my 20s and early 30s and had no concept that adult corporal punishment was even “a thing.”  What has your own experience been with age/maturity and interest in DD?  At what age were you when you gave/received your first disciplinary spanking or entered into a real DD relationship?  How old was your significant other? For the ladies, how old were you when you became not just a participant in a DD relationship, but an enthusiastic one (to the extent that's true)?