The Club - Meeting 369 - Asking For It & First Conversations

"If you don't ask, the answer is always no." -- Nora Roberts

I hope you all had a great week.  Mine had some ups and downs.  On the upside, the weather this great was beautiful.  Good motorcycling and hiking weather may be right around the corner. 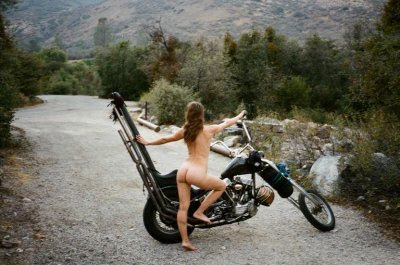 On the upside (sort of), after putting myself on a glidepath to taking some serious time off and maybe even a temporary retirement, for a while it looked like an opportunity that I’ve wanted for years might be within my grasp.  But, no luck.  Deep down inside, I knew it was for the best, as I know I’m nowhere close to really recovering from last year’s burnout, and I really do need to take some time to figure out what I want to be when I grow up.  But, it really did bum me out for a few days.  That moodiness and some behavioral issues has me concerned that I might be backsliding after several months of getting myself onto a much better path.  So, I made it clear to Anne over the weekend that it probably would be good for both of us to rein me in before I jump the guardrails in a big way.  We’ll see what comes of that but, in the meantime, it was a nice segue into a topic suggestion from Belle.  She sent me an email suggesting the following:

I would like to hear from every husband who presented DD to his wife: How exactly did he broach the subject? What exactly did he say? How did it go? What was his wife's initial reaction? Did the DD start immediately, or was it a process before the first spanking? And now, looking back on it, would he have approached her any differently? What advice would he give to men who want to ask their wives but aren't sure how?

These are very similar to a topic and sub-topics suggested by “Elizabeth” a couple of years ago, but let’s do it again.  I love these “origins” topics, and it seems like Anne and I have had such a long break, getting started again is almost like starting over entirely, including the necessity of me approaching her to ask for it. 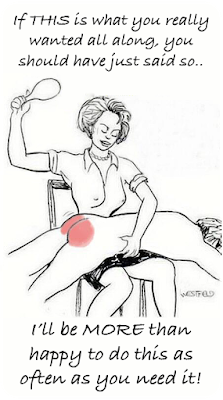 How did I approach her?  I did it after I found the DWC website and spent a weekend devouring it.  We were in bed, with the lights off, and I told her in general terms what it was about.  I'm not sure I could have done it any other way, except maybe by email, because I was so embarrassed by the whole thing.

How exactly did he broach the topic?  I approached Anne a few days after I discovered The Disciplinary Wives Club website and became a little obsessed. I was very embarrassed about it and had no idea how she would react.  I think because I was so embarrassed, I talked to her about it when we were in bed, with the lights off so she couldn’t see my face.  I broached it by telling her that I’d found this “interesting” website.  I told her in general what it was about.

What exactly did he say?  We had tried spanking as role-play, often involving her giving me play spankings as “punishment” for real misbehavior.  She had become concerned that this was simply reinforcing bad behavior, since the spankings weren’t real or any real deterrent and, because it was all foreplay, it was really just rewarding bad behavior with kinky sex.  So, when I told her about the DWC website, I emphasized that it was not really kink, or not just kink. Rather, it was about giving her real power to dole out real punishment for real offenses.  I also told her that the spankings were so real that the expectation was the husband would end up crying. I remember telling her that I felt our relationship was very unbalanced; that I was too domineering and controlling, while she was too passive. I told her DD might give her a way to even things out and take more control.

What was her initial reaction? How did it go? She didn’t say no, so that was a start.  She seemed at least somewhat interested, though it was kind of hard to tell what she was thinking. I would characterize it as puzzled, open, but noncommittal. I told her that I would send her a link to the website. She said she would check it out, but I kind of doubted she would.  I recall going to sleep even more wired and on edge, because I had no idea what to expect.  Honestly, I thought the most likely scenario was she wouldn't follow up at all, or that she would reject the idea as just more erotic spanking with the potential to encourage more bad behavior.

Did the DD start immediately, or was it a process before the first spanking?  She gave me my first spanking that same night. I did as she’d said and left work early that afternoon to shop for a hairbrush.  It turned out to be more difficult than I’d thought to find a good quality, heavy wooden brush.  I did the best I could, but looking back, what I finally found and brought home was pretty flimsy.  What I really remember about that afternoon is walking around the mall with a raging hard-on in my pants and frantic butterflies in my stomach! It really was incredibly intense.  When I got home, we sat down after dinner and talked a little bit about what should be spankable, etc. I actually hadn’t done anything that met the criteria that recently, and she asked whether we were waiting until I did. I told her that I was afraid that if we did that, it would never happen, so I suggested we should get the first one over with that night. 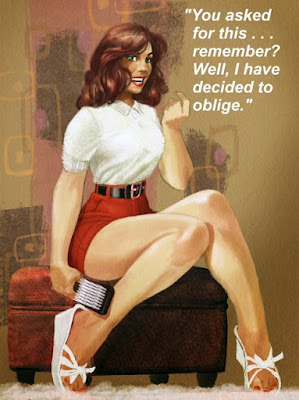 Looking back, would I have approached her any differently?  I don’t really think so.  I think I struck the right notes in the initial conversation, telling her why I thought this could be good for us and for her.  With the benefit of hindsight, maybe I should have prepared a little more, including taking more time to find a real brush, or maybe suggesting she start with a belt or something more serious than the too-flimsy brush I bought at her direction. But, I really had no idea whether she would respond positively to the whole thing, nor did I really have any concept of what a real adult spanking was like or what it required.  It took more experimentation and more serious tools before it became “real.” But, I think I did about all I could at the time given the state of my knowledge and experience.

What advice would he give to men who want to ask their wives but aren't sure how? The way we did it ultimately worked, so for me the proof is in the pudding, so to speak.  While I hadn’t even heard of DD when we started experimenting with erotic spanking, I do think that early kink-based spanking may have lowered her inhibitions about the whole thing, so the ground was prepped a bit when the concept of DD came along.  I think giving her a resource like the DWC to look at and absorb at her own pace was helpful. I think it was also important to tell her honestly that I had found this concept and that it had hit me pretty hard.  I think she detected the earnestness in that conversation in bed in the dark.

So, please tell us how you or your husband approached you about having a DD relationship or asked you to give him a “real” spanking.  I look forward to hearing about it.