“It may be a man's world, but men are easily controlled by women.” ― Ashly Lorenzana

I hope you all had a great week.  It was bitter cold where we live.  I did get in a few hikes in the snow with the dogs, which nice if a little physically challenging. 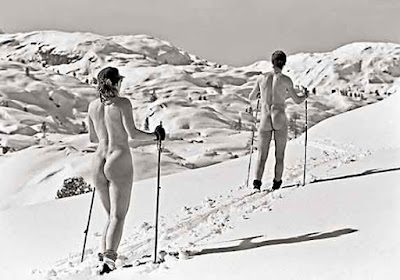 In a sad testament that 2020 so far looks a lot like 2021, I spent way too much time watching a “trial” of the weightiest of issues the outcome of which was beginning to end a foregone conclusion.  At least when it was over, I didn’t have to listen to a lot of contrived rationalizations from the Profiles in Perfidity crowd.  May we now finally move on?  Somehow, I doubt it. 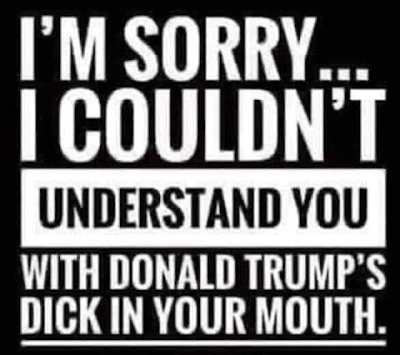 I assume others may have shared my distraction or come up with their own, as we didn’t get nearly as much discussion about as I anticipated on the popular topic of “witnesses,” this time with a nearly exhaustive set of sub-topics.  But, since it is so popular, I will continue to try to think of other possible spins on it.

This week’s topic took me an unusually long time to prepare. Not because writing it up took a lot of time, but because even though it is sort of related to witnesses—a topic for which there is no shortage of relevant spanking art and captioned pictures—it took me hours of going through my spanking art archives to find anything that fit the topic, and none of what I found was directly on point.  So, I’m stretching a bit to make some of these meet the subject.

The topic is outsourcing punishments to third parties.  A few weeks ago, one of our group (I think either Alan or ZM) left the following comment:

Now as far as "outsourcing" punishment, that would definitely work. If my wife decided that I was to be punished and sent me to someone else for them to punish me, whether it was a professional or just a friend, that would still very, very much seem like genuine punishment. In fact, because of the embarrassment factor, it would seem super intense, whether she spanked hard or not.

I’ve thought more than a few times about the scenario of Anne ordering me to take a spanking from someone else, either to increase the punishment in some way or, perhaps, because she was away from home or physically unable to deliver a well-deserved punishment spanking.  When I’ve thought about that scenario, for some reason it usually involves being spanked by another man, though I’m not intending to take this topic in that direction specifically. 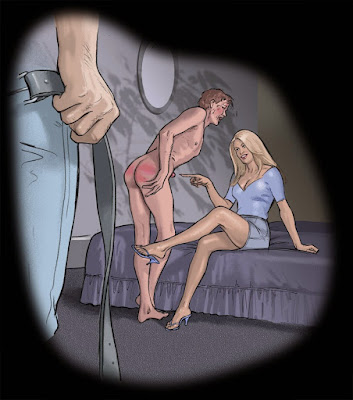 It probably shouldn’t surprise me that one of the first times I recall encountering this topic it involved spankings from a mother-in-law, which is a pretty prevalent theme in spanking art and stories.  I’m pretty sure a story called Military Duty Calls in the “Real People section of the Disciplinary Wives Club website, http://auntkaysdwc.com/abegin.htm, that I read very soon after finding the website was the first I encountered that dealt specifically with a wife deciding to “outsource” her spanking role to another woman.  The story involved a Disciplinary Wife who was a member of the U.S. military and was leaving the country on a deployment.  She asked her mother to assume disciplinary responsibility over the husband in her absence. Something I liked about the story was that wife stayed pretty firmly in control, laying out the rules and the process for her husband before she left and staying informed as her mother inevitably had to take things in hand.  As I recall, she also spanked him again herself when she got back, as she had said she would when putting the process in place.

However, when I set out to prepare this post, that DWC story was really one of the only examples I could find of stories, drawings or captioned photos related to “outsourcing.”  I found this example from Barbar O’Toole, that for whatever reason I’ve always interpreted as a mother outsourcing her son’s spanking to an aunt or other relative. 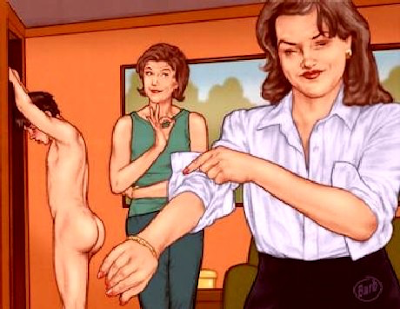 It also occurred to me that there is one fairly common “real world” example of “outsourcing”—one that some of us may even have experienced personally—namely, a frustrated mother leaving a punishment spanking for dad to take care of when he gets home. 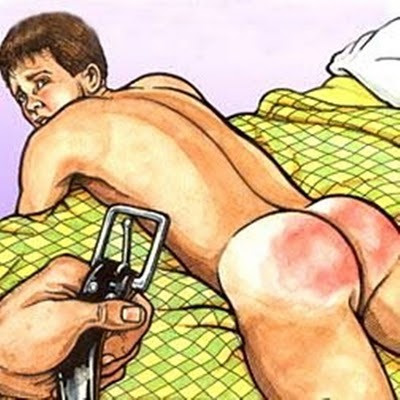 I also found this captioned picture with a slightly different spin on the spanking in boarding school trip, with the text suggesting a mother sending her son to boarding school for the specific purpose of outsourcing some deserved discipline. 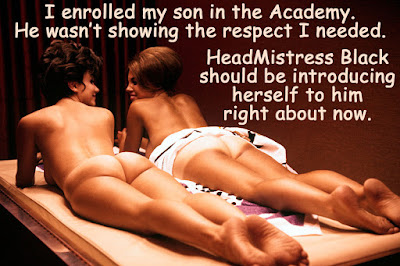 But, I found very little on the topic of a wife sending her husband to another woman for a spanking, or having another woman carry out a disciplinary spanking because the wife wasn’t available or couldn’t do it for some reason, or for some other reason.

What are your thoughts on “outsourcing” punishment? Would it feel like real punishment, or like some kind of kink?  If a spanking were to be outsource who would you as the spankee “prefer” take on the spanking role, if you had to choose someone?  For you wives, would you ever consider letting someone else give your husband a real disciplinary spanking?  Why or why not?  Who would it be?

Tomy, I know you both experienced this and witnessed other men being sent to Aunt Kay for a spanking.  I hope you will share a few of those experiences with us.