I hope you all had a great week.  Mine was, once again, exhausting.  I’ve taken on a new, longer-term project at work.   If I succeed, it could make a positive difference for many people in our company and would be a big personal accomplishment.  But (there’s always a “but,” isn’t there?), it is challenging not just objectively but in relation to my own personal historical roadblocks.  First, it involves trying to fix an aspect of our business that has been a chronic problem, and there is no easy fix.  It is going to take both time and consistent, diligent effort.  Unfortunately, I have a problem called “short attention span.”  I tend to be way better at short bursts of very concentrated effort.  So, maintaining focus over the course of a project that will probably take at least a year, and maybe longer, is going to be hard.  Second, this is going to involve even more travel and probably more work-related socializing and networking.  We all know those are my major tripwires where personal behavior is concerned, and because I will be on the road even more, my wife will have even fewer opportunities to keep me in line in a focused and consistent way.  So, I go into this weekend feeling exhilarated about the new challenge but leery of what my historical track record could bode for whether it is ultimately successful.

I thought we had a great discussion last week.  Thanks to Elizabeth for suggesting it.  It seems pretty clear that the "recipe" for using DD successfully is:
Near the end of last week's talk, Frank and Tomy brought up the issue of maternal authority and power.  In discussing one aspect of his wife’s authority, Frank observed:

“When she comes up to me at a party and takes a drink out of my hand and says "You are done, dear," with a smile and tone that will not be bucked, it touches something deep inside me. She calls it the eternal mother. I don't know exactly what that means, but I know that it feels like her authority is from something more than ourselves.  I even think that those around me feel it. None of my friends has called her a B or teased me about it. They respect her for having the knowledge and the guts to cut me off. One friend said to me, "Wow, your wife knows how to use tough love." And I agree: It's the same authority she uses to swing the paddle, just exhibited verbally and publicly. In those moments, I would do anything she told me to do. I feel her mother power.”

We’ve talked about this before, including a topic on it around this time last year but it didn’t get a ton of response.  Yet, it continues to pop up in comments on various topics.  I also feel like addressing it again, because my own openness to it has increased.

In the past, I’ve shied away from talking openly about this issue that is plainly a part of some DD dynamics.  It raises all sorts of controversial psychological and social issues.  Oedipal theories.  Corporal punishment’s role in non-adult discipline.  Manliness and sexuality.  It really is a very loaded topic.

And, not just with respect to discussing it on a blog.  I shied away from it here, and I also never really brought it up with my wife.  At least not directly and forthrightly. Until about a year ago.  We had talked from time to time about particular disciplinary archetypes.  Things like strict teachers and principals.  But, we never really talked about the obvious one – strict mothers.  Then, one night she said something about liking how DD reduces me to a little boy who has to do what he is told.  I think she was tip-toeing around the issue in the same way I have.  The nurturing but strict mother archetype clearly seems to resonate with her in ways that other DD images do not, yet we both find it hard to talk about.

I do think that while there are maternal aspects to my DD desires, it is kind of a secondary factor.  My DD leanings seem to have more to do with needing an authority figure than needing a maternal authority figure.  But, it's complicated.  I do think that my mother's approach to discipline probably was the impetus for some of my later needs in this area. My own mother was very strong-willed in some ways, but it was expressed very erratically.  She seldom made or enforced rules but, at the same time she could be very intimidating and demanding.  But, the expectations and demands never seemed to be tied to an actual consequence.

I wasn’t really aware of how stressful that was at the time and, in fact, the absence of rules seemed like a great thing.  It was only when I stumbled on the Disciplinary Wives Club in my late 30s that something really clicked.  The descriptions of men having boundaries imposed upon them by strong-willed wives just really got to me deep down inside.  But, I don’t think I consciously associated it with anything maternal.  I really needed someone to set rules and enforce them consistently, but anyone would do if they had sufficient presence and authority to make me feel like I am not the one in command and that punishment is inevitable and resistance futile.  While the "strict mom" archetype serves that role, so could an aunt, teacher, school principal, or any other authoritarian whose power or position was sufficient to make me submit. 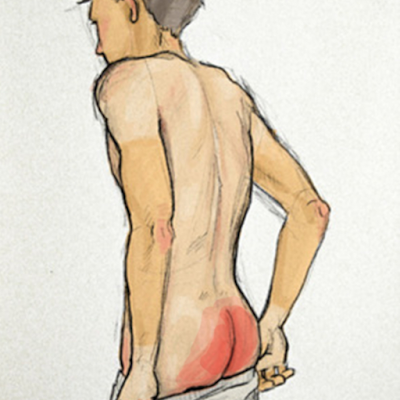 Nevertheless, there definitely is some kind of psychological entanglement with my teenage years and the unmet need for discipline at that particular time in life.  Something about that does connect to the maternal force.  As I said when discussing this last year, Anne has talked in positive terms about using DD to reduce me to a "teen-age boy who needs a spanking from his mom."  She also has compared me to a teenager who mischievously pushes buttons just to do it, then is surprised when she actually does something about it.  It's that  roller-coaster ride that is my DD obsession—wanting boundaries when I don’t perceive them and then getting resentful when she suddenly imposes one.  What I am starting to appreciate is it may very well have been my own mother's erratic approach to parenting that put me on that roller-coaster, wanting discipline when it is absent but resenting it once it is imposed. 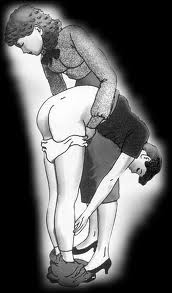 There also is not a clear link between my mother and my desires for corporal punishment. While I'm sure she did spank me when I was young (all mothers did at that place and time), I really don't remember any of them, which probably indicates they stopped when I was fairly young.  So, while I probably got a few from her at an early age, a mother taking down my pants for a well-deserved butt blistering following a long run of adolescent bad behavior was not part of my upbringing.  Because I didn't experience that as an older kid, I think part of me now is  perpetually surprised when confronted with a real obstacle, like Anne telling me to do or not do something.  It brings me up short and my first reaction is to resent it, even if it is exactly what I need.

I've also noticed that part of the attraction I have to spanking drawings that include a maternal vibe is the "getting down to business" demeanor and the sense of inevitability it conveys.  As we have discussed, certainty of punishment and the futility of resistance are big elements of this for me.

So, while I do not think that "maternal" aspects of DD were part of the initial attraction, they are now and it is something I am willing and interested in exploring more openly both with Anne and in this forum. Instead of specifying a question related to all this, I am going to purposefully leave this one more open-ended.  I can’t quite nail down exactly what it is that I would like to explore here, and I’d also like to leave a lot of room for people to bring their own feelings and experiences into this discussion.