The Club #285 - First Conversations and Origins

“Though it seems curious, I do not remember ever asking for anything but what I got it.' - Sojourner Truth

I hope you all had a great week.  Mine was, as is becoming a theme, exhausting.  Just bone-numbingly exhausting.  I can’t tell yet whether I am killing it in this new work role, or whether it is killing me. I think it will settle down as I put out some of the existing fires, but it’s depressing how many new ones ignite just when I think I have the old ones under control.  But, last year I was bored, and this year I’m massively over-stimulated. Between the two, I’ll take the latter.

But, this level of busyness does have some implications for Domestic Discipline.  Last week, I previewed the new reporting and accountability system we are trying, and for once we carried through with it.  I ended up with three consecutive sessions of five minutes each, with the leather strap, a mixed session with cane and paddle, and a short leather paddle/strap with holes.  The latter, which I received as a Christmas “present” under circumstances I will keep to myself other than to thank (sort of) the person responsible, is surprisingly painful.  Because it is short and pliable, it has this interesting way of curling up into the inside of the cheeks, which unlike the rest of my butt have not been spanked for 15 years and, hence, are a lot more sensitive.  Ouch.  The sequential spankings that added up to 15 minutes total, with intervening corner time, did seem to fit the purpose I hand mind, namely I remained very conscious that I could have avoided one or more of the independent rounds of punishment and corner time by behaving, so the power to control the extent of my punishment was in my own hands.

One other lesson: I am finding that I just don’t really bruise from spankings anymore.  Even 15 minutes of very hard spanking left me bruise free, except for those parts of my inner cheeks that the leather paddle reached, and some marking on my thighs where the can wrapped around.  Yet, despite the lack of bruising, my butt remained very sore for several days.

The implications of this system for this week are interesting, and we will see how she chooses to handle it.  The plain fact is that under the system I myself created, last week was a total fail.  I didn’t work out. I didn’t keep up with the annoying administrative task.  Yet, I was productive.  Almost too much so.  It's not really an excuse, so much as an explanation.  I had work-related social engagements tied to the new role every single night, and these weren't things I initiated or could easily get out of.  The week began with an unexpected "crisis," and I was stressed to the gills and waking up repeatedly every night thinking about work stuff, plus I had early morning meetings every day.  The lack of sleep, early morning meetings and functions after work made it all but impossible to work out, as I just didn’t have any available block of time unless I wanted to get even less sleep.  And, each day was spent jumping from one fire to another, in a way that left me totally overwhelmed and whipsawed, to the point that I just didn’t have the time to keep up with all the administrative tasks.  So, my failure wasn't about not being productive or not trying hard; quite the opposite.  It was just an overwhelming week, struggling to keep my head above water. There is a story on the DWC website's "Real People" section called Bringing Out the Little Boy that touches a little bit on how things felt when I got home last night, beaten up by the week that was finally over:  http://auntkaysdwc.com/.

Now, I am not letting myself entirely off the hook. The work-socializing exacerbated some of my own problem habits, and I could have exercised more self-discipline there.   But, I really do feel like it was an exceptional week, and I did about as well as I could under the circumstances.  So, my plan is to report honestly but to also give that context, and the rest is up to her. 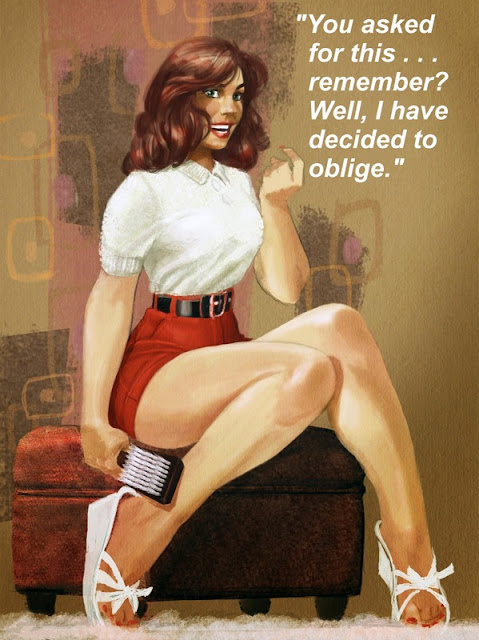 As for this week, a couple of weeks ago Elizabeth suggested some “origins”-related topics.  While we do those fairly frequently, we also do seem to have picked up several new commenters in the last few months. So,  I’m fine opening that topic up again, particularly since Elizabeth's phrasing of the sub-topics focuses on the communication process around initiating the DD relationship and the parties' respective reactions to that communication.  Great angles that hopefully will attract some good observations from our more serious commenters.  And, as with our philosophical meanderings last week, if exploring feelings and real-world communications scares off a certain segment of our readership, all the better.  For myself,  I always enjoy hearing how others got into this thing we do, because I still maintain that it is not a very common lifestyle and getting into it displays the kind of openness, courage, and mutual support that couples should be proud to share, encouraging others to ask for what they want and to be open to giving it even if it seems a little weird at first.

With that lead in, Elizabeth’s suggested topic and sub-topics are:

For the husbands who initiated DD:

For wives who were approached: 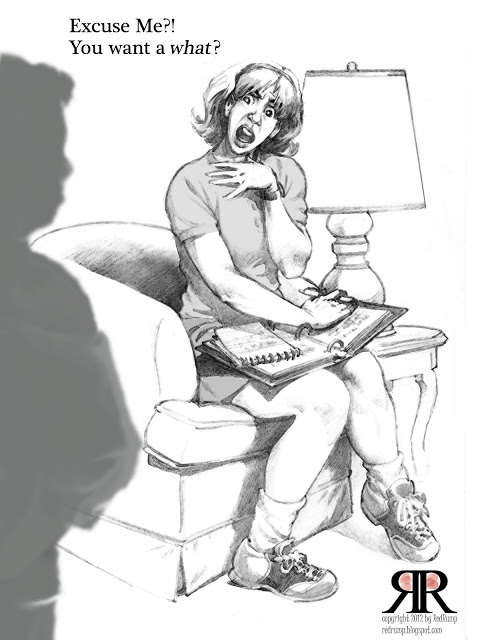 And for those where the husband did not initiate: Tell your story!  Because, "asking for it" can be through words or actions, right?

I am not going to go into my own origin story in detail, as I’ve told it here repeatedly. Though, Anne is always free to jump in and tell her side of it.  Hint, hint.

But, I will respond to a couple of Elizabeth's specific questions.

How did I approach her?  I did it after I found the DWC website and spent a weekend devouring it.  We were in bed, with the lights off, and I told her in general terms what it was about.  I'm not sure I could have done it any other way, except maybe by email, because I was so embarrassed by the whole thing.

What exactly did I say?  A lot.  Much of it centered on how this was not kink, or not just kink but, rather, about giving her real power to dole out real punishment for real offenses.  I also told her that the spankings were so real that the expectation was the husband would end up crying. That one turned out to be more fantasy than reality, but I do remember making that point to her, because I was trying to show that I was not suggesting a continuation of the short stint of erotic play-acting that we had tried in the past and that she felt might encourage bad behavior.

How did I work up the courage?  Well, I really felt like I didn't have much choice.  After I read the stories and other content on the DWC website, I was so overwhelmed by the whole thing that I couldn't think of anything else.  It was front and center in my mind all day and all night.  I  really couldn't NOT tell her about it.  It was truly an obsessive kind of thing, and as far as I recall the first time I had experienced anything like that.  I was aroused and scared at the same time.  And, to be clear, not scared that she wouldn't do it.  Scared that she would.  Yet, here I was asking for it.  It was all very paradoxical and perplexing, but the whole idea of it resonated so strongly for me that I had no real choice but to at least tell her about it and let the chips fall where they might.

How long did it take? I don't recall exactly, but it was short.  Probably two or three days.

What was her initial reaction?  She didn't say very much on the night I told her about it.  She listened, she said she she would check out the DWC website, and that was about it.  I would characterize it as puzzled, open, but noncommittal.   I recall going to sleep even more wired and on edge, because I had no idea what to expect.  Honestly, I thought the most likely scenario was she wouldn't follow up at all, or would reject the idea as just more erotic spanking with the potential to encourage even more bad behavior, and that would be that.  But, she called me at work (I think it was the next afternoon, though I don't have a clear memory of that.)  She said she had looked at the website.  Her only initial comment was, "Very interesting."  She then said that if I was serious about it, sI better go buy a heavy hairbrush.

Was it all that I expected?  In a word, no.  We had so little experience with this, and didn't appreciate how hard it is to give a really effective spanking OTK with a hairbrush.  I'm not saying it can't be done, but I think it is likely to be effective only with a very experienced and serious spanker.  It took more experimentation and more serious tools, including a wooden "fraternity"-style paddle, before it became very real.  I still recall the first time it really hit home that I might have asked for more than I had bargained for. We had instituted a system of assigning points to each type of offense, with each point representing one swat with the paddle.  While my spankings up to that point had averaged between 10 - 25 swats, I had an exceptionally bad week, and I gulped when I realized it added up to 60.  She had never given me anything close to that before. I said something about not being sure I could take that many, and without skipping a beat she told me that I was going to take that many and that if I hadn't wanted that many then I should have behaved better.  That's what I mean when I say that without much hesitation, she took to the spanking part of this thing we do like a duck to water.