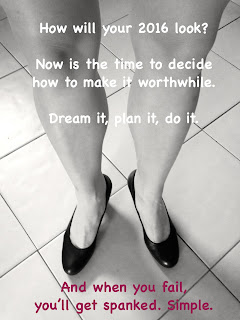 Hi all. Welcome to this week's edition of the Disciplined Husband's Forum, our weekly gathering of men and women who are practicing or curious about a Domestic Discipline or Female Led Relationship.  Our first real post-holiday meeting of 2016.

Our edition on resolutions was about as big a flop this year as in years past.  Myself and a few other people into the concept.  Many others who reject it categorically.  Looking back over the last week -- I may have to concede the detractors are right.  Pretty much every single one of my non-DD resolutions already lie in tatters on the floor.  Low-carb diet?  Blew right through that one in a flurry of burgers and fries last night, and the rest of the week wasn't all that much better.  No  more than two drinks at a sitting?  There was not a single night this week in which I had less than two drinks!  (Ever notice how those drinking and dietary goals seem to rise and fall together?)  Unfortunately, this is what tends to happen to me around holidays and when work slows down.  The focus goes from getting the work done to working relationships to keep the pipeline of projects flowing.  And somehow those relationships always seem to involve, "Want to grab a beer or two this week?"  Oh well.  We stumble.  We pick ourselves up and dust ourselves off.  Forward.

One of the resolutions I raised and do still hope to fulfill is doing a self-directed "DD Boot Camp."  This is a relatively new concept for me.  I had never heard of it until a few weeks ago, when I was visiting a DD on-line forum.  Most of the participants are in a M/f dynamic but have been quite welcoming to those of us in F/m dynamics.  Several of the participants were talking about the intensity of their "boot camp" experiences, and I inquired about what exactly a "boot camp" is, knowing that if it was any kind of group activity, it would be a non-starter for my wife.  As it turns out, it is not a group session of any sort.  Instead, it is a structured one or two day self-directed program designed to be an introduction, or intensification, of the domestic discipline relationship.

One of the participants was kind enough send me a "book" on the subject.  It was really more like a long .pdf pamphlet, which you can find in a couple of places.  There is a link available on the author's blog, Learning Domestic Discipline: http://learningdd.blogspot.com/2011/11/boot-camp-book-now-available.html.  It also seems to be available as an e-book on Amazon.  If you decide to take a look, two words of warning.  First, it is one of those "five pages of helpful information crammed into a 50-page book" kind of things.  But, it is a quick read for that same reason.  Second, it is very much written from the "Christian Domestic Discipline" perspective, with a M/f orientation.  I personally don't have much problem ignoring the religious overtones and switching up the gender orientation in my head, but if you aren't able to do that easily, it will not be your cup of tea.

The program itself is pretty simple, reflecting its "DD for beginners" orientation.  It needs to be done in private, which means finding a place to be alone together for a full day or two.  There are a series of structured "homework" exercises and couple discussions, basically designed to get both parties on the same page about what they do and do not want from a DD relationship, what their "hard limits" may be, etc.  There also are a series (three per day) of spankings, of escalating intensity. They are designed to help get both parties, but particularly the disciplinarian, past the mental and emotional blocks involved in "hurting" the other party and exercising and submitting to authority.  During the time the couple is in this "retreat" kind of environment, there is some emphasis in staying in character with one of them being clearly dominant and making all the decisions and the other staying in their submissive role throughout.  That is, by the way, the third caveat:  This approach is more of a Dominance/submission dynamic than a very limited DD "punishment for specific misbehavior" approach.

Have others done anything like a Boot Camp?  Any desire to?

I hope you have a great week.

Dan
Posted by Dan - A Disciplined Hubby at 9:49 AM