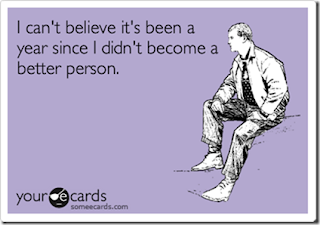 Another year come and gone.  2014 was not a great one for me.  Work was stagnant, and so was a lot of the rest of my life.  I really was not very sorry to see it in the rearview mirror.  2015?  Totally different story.  It was a roller-coaster from virtually day one, but in a good way.  Good in terms of the way I like to live, anyway.  Fast paced.  Downright frenetic.  Stretching.  Growing.  Getting out of my comfort zone, way out over my skis. Then, somehow pulling it off before disaster strikes.  Better yet, I was aware that it was a big year, as I was in it.  That is not always the case.  I had a similar year (though on a smaller scale) some time back, and I really didn't recognize how special it was until I looked back in late December and listed all the positive movement.  We often live these disconnected existences, looking back at the past with longing, or blaming things in the past for our current state.  Or, we long for a future different from what we have, putting all our energy into imagining some ideal future state in which enough of our problems will have gone away that we will finally give ourselves permission to be happy.  Or, just to be content.  It is rare that we have a year of living in the midst of the storm, while being fully aware that is is a storm, but that the storm, with all its lightning and thunder and battering winds, is exciting and even fun.   I can't say that I was FULLY aware and engaged at all times in 2015, but I was there for a lot of it.  So, unlike 2014, I bid 2015 a fond farewell, with a bit of regret at seeing it pass.

As longer-term readers know, I like resolutions.  I like setting goals. I know I won't always hit them, but it's amazing what you can accomplish over time if you are able to improve incrementally day by day, week by week, year by year. On the other hand, I admit to being a little depressed when I look back at old blog and journal entries and realize that I seem to wrestle with some of the same challenges year after year.  Last year, I posted a list of some of my resolutions for 2015.  Here is how I did:

I hereby resolve to:

I hereby resolve to:
What I find fascinating when I look back at these is, I failed or only marginally improved in goal after goal, yet, as a whole, 2015 turned out to be a great year.  This demonstrates the necessity of keeping an open mind and enjoying what you get, even if it is not what you thought you wanted.  You can have a really great year even if it goes in a totally different direction than you intended.

The other interesting aspect to my resolutions where DD was concerned is that I failed at so many of the specific goals I set, yet the year as a whole was probably the most transformative we have had since starting domestic discipline a decade ago.  While far, far from where we want it to be, her authority and willingness to exercise it grew by leaps and bounds.   My ability to really submit grew, though it was an internal fight every step of the way.

So, where do we go for 2016?  Here are some thoughts.  Although given how 2015 turned out, I know these are, at best, kind of like looking at a map to lay out a route for traveling from one coast to another.  On a journey of that length, there are going to be detours.  Road closures.  Unexpected diversions.  Long-anticipated sight-seeing that leaves you flat and thinking, "Well, I drove 500 miles to see that?"  But, also, wondrous sights and sounds and tastes that you never knew were out there but were waiting right around the next bend.  With that all in mind, I'm keeping these a little more "thematic" this year, letting the details work themselves out, though I am putting in a couple of specific, concrete ones related to Domestic Discipline.  I'm also mixing up goals related to DD with  others that are more generally applicable to things I need to do to advance the ball over 2015.

RESOLUTIONS: 2016
So, those are some of my resolutions for 2016.  Care to share yours?  I ask that question, knowing that every year I have broached this topic, and every year it has flopped.  But, as indicated by my own attempts at putting my personal resolutions together year after year, hope springs eternal!

Have a great week, and an awesome, consequential, meaningful 2016!