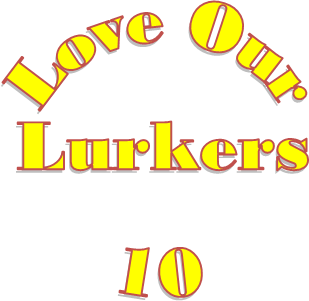 Hi all, and welcome back to the Forum, our weekly gathering of men and, increasingly, women who are participating or interested in Domestic Discipline and Female Led Relationships.  Welcome to you all, and particularly our Lurkers.  While the Love Our Lurkers event officially ended yesterday, I would like to keep it running on this blog at least through the weekend, as I know some people are too busy to stop by during the week.  So, to all our Lurkers, this is a continuing invitation to jump into the conversation.

We had another poll close, and I will say in advance that I am going to keep a heavy thumb on the "Moderator" button for this one, because politics by its very nature tends to divide more than unite. But, in my ongoing attempt to ferret out who this little (or not so little -- hard to say) community of ours is comprised of, and given that I am kind of a political junkie myself and it is debate season, I did want to see what we could learn about where our readers lean politically.  Participation on this one was low -- only 60 votes, which may itself indicate that this was a sensitive topic.  The results were:


With participation this low, it's hard to say anything very meaningful, other than that these do not mirror the population as a whole. According to Gallup: "An average 43% of Americans identified politically as independents in 2014, establishing a new high in Gallup telephone poll trends back to 1988. In terms of national identification with the two major parties, Democrats continued to hold a modest edge over Republicans, 30% to 26%."  Among those of our readers who participated,  Independents and Democrats are virtually tied, while Republicans held a lead of 4-5 points.  While it might be tempting to look at these results and conclude that Republicans are more interested in DD and FLR than Democrats and Independents, keep in mind that one of our previous polls showed that this blog's readership tilts heavily toward the over-50 age demographic, and Republicans outnumber Democrats in that age group by a significant margin.   Our age-related poll also showed that very few of our readers are in their 20s and early 30s, while people in that age cohort tilt very heavily Independent or unaffiliated.  Therefore, those age-related demographic aspects of our particular readership could alone could account for a lot of the split we see in this poll.With that little bit of demographic insight, or lack thereof, addressed, on to our actual topic.

The inspiration for this week's topic comes from the combination of a reader inquiry that came to me by email, and a conversation I had (again by email), with another reader.  They raised separate issues, but the more I thought about it, there was a common theme that seemed worth discussing. The initial reader inquiry (I am not revealing his name, because he has not given me express permission to do so) was centered on what to do when the disciplinarian feels they themselves need discipline or atonement?  It's a hard set of options in some ways.  The couple could try "switching."  There are, for example, versions of  the Spencer Spanking Plan that encourage mutual disciplinary spankings.  However, for the reader who contacted me, it wouldn't work, because it would undermine the F/m authority they want to keep in place.  He also just wouldn't feel comfortable spanking a woman.  (I share that issue, by the way.  I have no problem at all with those who switch or with the those in consensual M/f spanking relationships, and I welcome them to come and participate in our more F/m oriented group.  But, I personally couldn't give a disciplinary spanking to any woman.)  Another option might be a professional disciplinarian, or even a fellow non-professional disciplinarian who could lend a helping hand, so to speak.  But, how do you deal with finding the right one, assuring that they are safe and sane, etc.?

The related question that came to my mind is, do many of our Disciplinary Wives, in fact, ever have the desire to be disciplined themselves? I also wondered whether this also reflects another kind of natural division among those who adopt this lifestyle -- some react to stress and being out of control by wanting to exercise more leadership and more control, while others react to those same forces by wanting to stop controlling everything and by handing the reins over to someone else.  I definitely fit in the latter camp.  The whole reason I found DD attractive was it gave me a way to step back from the control I have to exercise in the rest of my life.

So, I know this topic is a little nebulous, but any advice for our fellow reader who would like to meet his wife's infrequent but real need for some atonement?  And, what is your own reaction to feeling out of control or stressed?  Do you want to exercise more control, or give it up to someone else?

Dan
Posted by Dan - A Disciplined Hubby at 9:43 AM