“You can't talk your way out of a problem you behaved your way into!” - Stephen R. Covey

Hello all. Welcome back to The Disciplinary Couple’s Club.  Our weekly gathering of men and women who are in, or would like to be in, a Domestic Discipline relationship.  I hope you all had a great week.

We had a good discussion last week.  I know it covered some controversial ground, and everyone kept the conversation respectful.  I thought the most interesting part was about whether a drop in the frequency of corporal punishment at home and in schools is likely to result in a drop in domestic discipline over time, since most people did seem to think their interest in DD as adults was connected, at least in part, to seeing or hearing spankings at school or at home growing up. It does seem logical that if people are exposed to it less as kids, interest in it as an adult is less likely to be triggered.

Yet, it’s a really convoluted cause-and-effect environment right now, and I don’t pretend to have any idea how it will ultimately play out. On the one hand, there seems to be less societal shaming of kinky or unconventional sex practices than at any time in modern history, more access to sexual and spanking content on the internet, and the wild success of 50 Shades would seem to indicate a lot of openness to kink, especially kink involving dominance and power dynamics. Yet, studies keep showing that both teenagers and adults are having less sex and delaying it until later in life. So, all the new openness around sex seems and the breakdown in societal mores around sex and kink is correlated with less sex actually taking place.  Further complicating things, while DD has sexual aspects, it’s not about sex per se, so I don’t know how strong any correlation might be between overall sexual trends and trends in DD.  All I know is, it seems very complicated and more than a little arbitrary.

Anyway, it’s been an interesting few weeks here.  I feel like after getting off to a really slow start to whatever this new phase of life I’m in is—early retirement, semi-retirement, hard pause . . . whatever you want to call it—things are kind of picking up. It’s probably a result of Anne joining me in the state of joblessness.  It seems like we’re traveling more, planning travel more, going out more in general, reconnecting with friends and making new ones, etc.  I could see this new, more active phase accelerating, particularly since I think she’s a lot more certain that the active work phase of her life is done, while I’m still kind of on the fence. 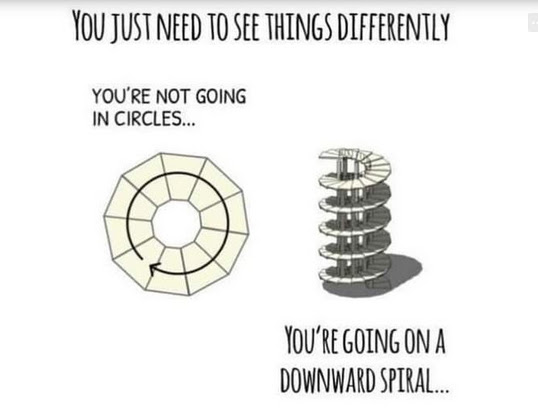 I also feel like things are changing on the Domestic Discipline front, though so far it’s been more about the intention than the actual disciplinary action.  Part of it is Anne seems more focused on it now that work isn’t competing for her attention. But, the other part is some odd escalation in my behavioral issues.  I say odd in that old problems aren’t (in my opinion) getting any worse are actually a lot better than they were a year or so ago.  Yet, on that “small things” front we talked about a couple of weeks ago, things have gotten worse and in weird ways.

During that discussion, I talked about how Anne was getting increasingly mad about me failing to lock doors and also leaving the garage door open.  Not an hour after I left a comment on the blog about that happening, I did it again!  And, this time she followed through and spanked me for it that night.

Yet, I did it again within a day or two of that spanking, and it has happened several times since.  The odd thing is, until recently this was a very infrequent problem. Now, it seems to be happening all the time.

I am very clear in my own mind that I’m taking her concerns about this seriously, yet the problem seemed to get worse, not better, after she spanked me for it. I honestly have no idea what’s causing the problem.  I would actually worry about whether my mind is slipping in a medically troubling way, yet the problem seems to be manifesting in only this one, very particular way. 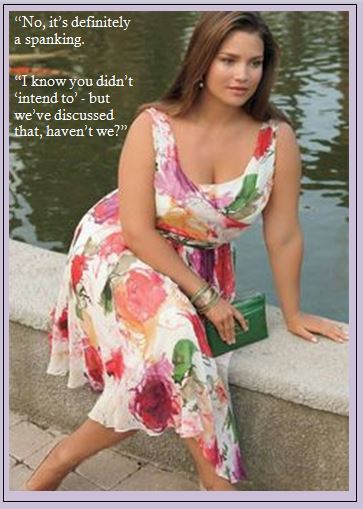 While the incidents kept piling up, Anne didn’t give me another spanking.  She threatened it multiple times, but it didn’t actually happen.  I will own up to it; the failure at follow-through was attributable mainly to my efforts at delay.

While I feel like her intentions around DD have solidified in the last few months, unfortunately, so far she hasn't developed quite enough strictness to just put her foot down. So, we both bear some responsibility here.  She does need to get more comfortable with not only giving an order but with actually making it stick in the face of some moderate resistance or questioning.  But, I also need to get much better at simply doing what she tells me to do, without argument or undermining. 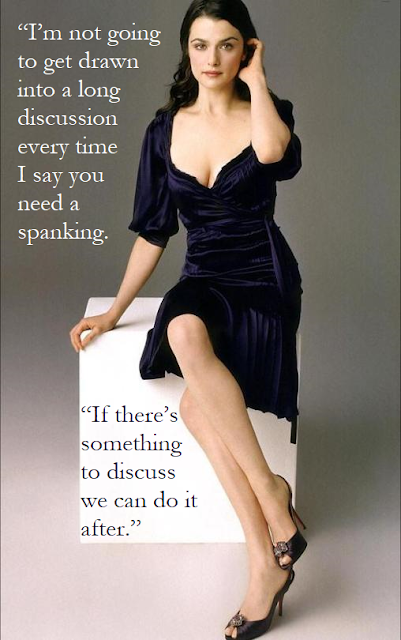 I feel like my efforts to get myself off the hook and avoid accountability are becoming a bigger problem. It’s not just failing repeatedly to close a garage door.  I mentioned a few weeks ago that I’d gone on a little adventure and, through sheer absent-mindedness and inattention, didn’t take care of some gear maintenance.  It caused some distraction and extra work for myself and others and, honestly, it could have created a safety issue.  I was pretty angry at myself for creating the situation and, when we got back, I had decided I was going to ask Anne for a hard spanking. Basically, for once I was determined to hold myself accountable.

But, then came all the garage door incidents, and I got spanked for one of them.  I should have still asked for a spanking for the separate inattention-related problem, but I didn’t. And, as several days went by, the connection between offense and accountability seemed more and more strained, until I finally dropped all intentions around asking to be spanked for it.

Then, there was an incident last week in which we disagreed on a particular behavior and whether it should result in a spanking.  With the benefit of hindsight, we both had legitimate points. I think I was right regarding the overall issue, but she pointed out that there was one aspect of the behavior that we had specifically agreed would result in spankings. 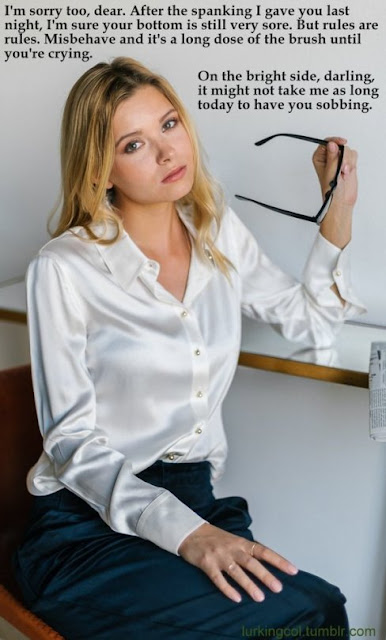 The bottom line is, no spanking happened, even though it probably should have and would have in the absence of me arguing with her.

We had a discussion here last year about these self-defeating efforts to delay or avoid punishment.  I do know it is self-defeating.  I say I want her to be more strict and stern, yet in the moment I can’t seem to help but undermine her efforts.  I truly get that it’s unfair to her, because she tries to be more assertive like I say I want, but then I don’t exactly cooperate with that process.

Yet, part of that resistance seems almost inevitable to me, precisely because things are starting to seem more “real.”  When she gets more assertive and more aggressive in ordering spankings, I try harder to get out of them. It’s unfair and counterproductive, but isn’t it also precisely what you would expect when discipline starts becoming truly imposed? I’ve said I want it to feel non-consensual, and when I genuinely don’t want to be spanked and actively undermine it, yet it happens nonetheless, that is a spanking that has, in fact, been imposed.

Therefore,  when I am unsuccessful in undermining her resolve, it actually augments her authority and the FLR aspect of the relationship. Trying to get out of it but failing to do so confirms her status as the real “boss.” 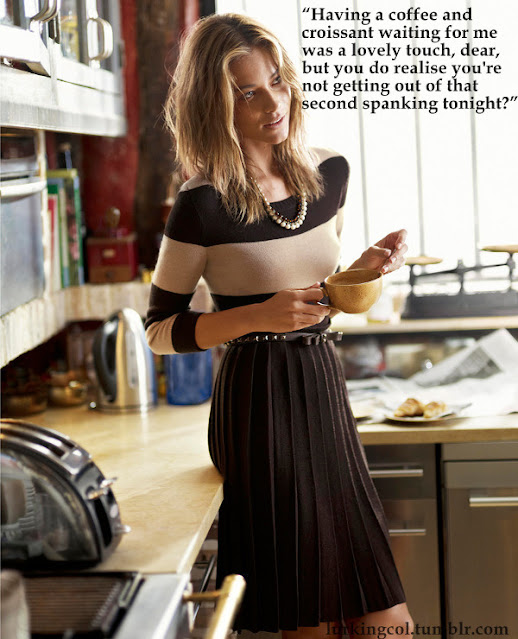 It’s a fine line, but if she sticks to her guns in the face of my efforts to delay or avoid, something that might otherwise undermine her authority ends up reinforcing it.  As I said about this last year, “[I]mposing discipline in the face of some mild resistance from me results in a virtuous circle in which her confidence goes up each time she gives me a spanking when I really don’t want one.”

I know there’s a lot to unpack in the above, and I think I’m going to leave the topic somewhat open-ended. But, I think it boils down to, I’d like to know how you think Anne should deal with both the repeat offenses (garage door closure) and with separate offenses that happen fairly close in time (my inattention regarding safety issues on my adventure, and the garage door, and the other incident where there was at least one aspect of rule-breaking)? 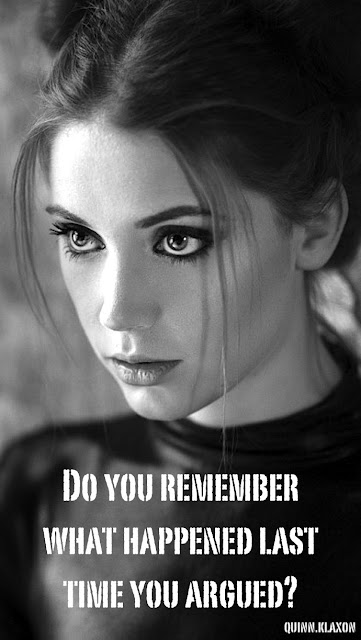 And, what about arguing?  It’s interesting that this seems like something that is bound to happen from time to time in any real DD relationship, yet when I searched for past topics on it to crib for this week’s post I didn’t find much.  So, while we’ve addressed repeat and multiple offenses fairly recently, I don’t think we’ve really taken “arguing” head-on as an independent topic.

If you are on the receiving end, how would your disciplinarian deal with you doing something like leaving a garage door open after you’d been spanked for that same thing a day or two before?  How would they deal with multiple but different offenses happening close together?  Would that usually result in multiple spankings?  If so, would they all usually happen in the same session?  Different sessions on the same day?  Spread out over multiple days? What about arguing?  Would that be treated as a separate offense and spanked separately? 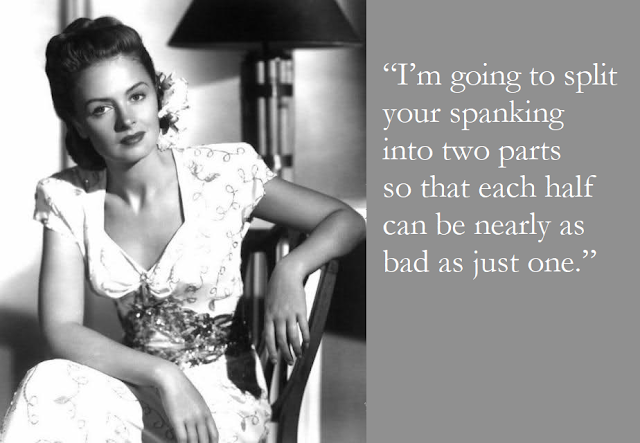 For the disciplinary wives (I recognize few are participating these days, but maybe this “nudge” will help), how do you deal with repeated offenses and multiple different offenses?  Do you have a go-to response if he tries to argue or delay? 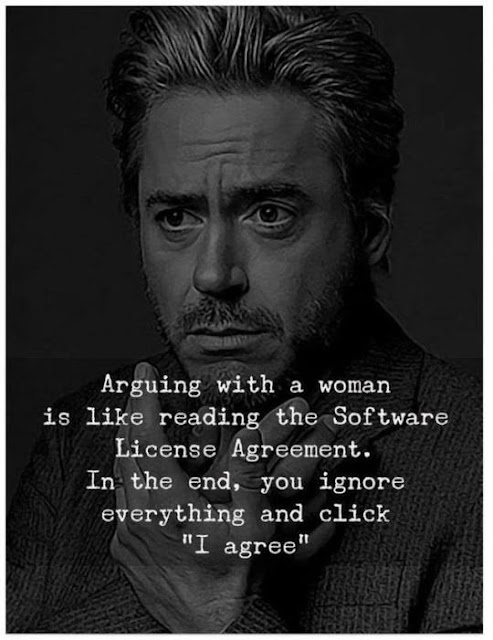