"I'm tough, I'm ambitious, and I know exactly what I want. If that makes me a bitch, okay." ―Madonna

I hope you all had a good week.

The discussion on the blog perked up a little.  I’m sure part of the reason that participation dropped in the first place was a lack of diligence on my part in posting regularly.  I recognize, by the way, the irony of griping from time to time about the ill effects of a lack of consistency in the application of discipline to our naughty bottoms, while not taking care to avoid the ill effects of inconsistency while trying to maintain participation here.  I’ll try to do better in the future.

There was some good stuff in the comments last week.  Here are a few excerpts that seemed worthy of following up on.

MW: “Combining today’s topics, I wonder if a small real world community could be the next step for the blog, if there were a way to safely do it. I read somewhere that the DWC community would require a simple phone call to weed out problematic members. Just a thought.”

worth thinking about and, rest assured, I have thought about it.  I need to think through what that might look like, and I’m happy to do so. Also happy to take suggestions, either here in the comments or by email.

Several other commenters talked about their experiences or fantasies with various “openness” scenarios my post had asked about.

Alan: “Imagine a world where husband discipline was both common and open enough to allow that sort of sharing among wives. It is a 10 on my fantasy meter although in practice I would probably dread it. Consider what leverage a wife would have just threatening her husband to send him to X, known perhaps as an especially strict disciplinarian or just for the embarrassment of reporting to another women for discipline.

It might be fun as an experience once or twice but beyond that I think it would turn the average DD husband into an angel to avoid it happening.

Or imagine what Tomy must have felt when the husband of the woman who was going to spank him answered the door when he arrived (I believe he related an experience similar to this.) Just the trust and communication that would be necessary among couples to make this work is fascinating.” 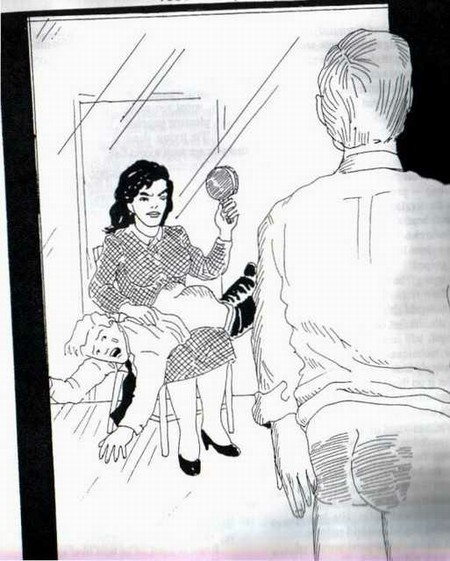 ZM: “On the other hand, I was talking with my wife last night about how it was when we were kids - albeit from different cultures. At home, spankings were generally administered privately, but often others heard the spanking taking place. Plus there was the whole being taken out of the room and then the embarrassment of coming back into the room. And sometimes spankings in homes did happen in front of others, though rarely. But either way, we generally knew when our friends (and even more so those we didn’t like) were spanked, because people talked.” 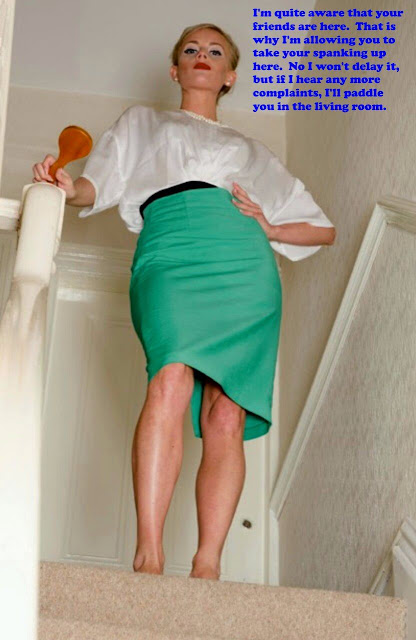 T: “Although, she has a childhood friend that she talks to, who lives across the country, I overheard a conversation one day, and her friend was complaining about her husband, my wife’s response was, no way T would have done that. I would have beat his ass.” 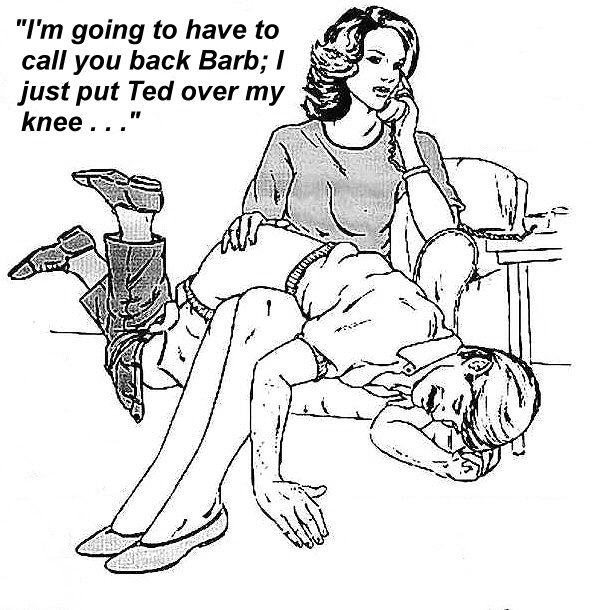 There were a few things that struck me about these and other examples people provided.

First, each of these three excerpts got a reaction from me.  Butterfly feelings in my loins and/or gut.  A common theme uniting them all is embarrassment.  I have a similar feeling reaction to Alan’s reference to Tomy being greeted at the door by the husband of the woman who is going to spank him, to ZM’s observance about the embarrassment of coming back into the classroom after being spanked in the principal’s office, and to T’s overhearing his wife tell a friend about how she would have beat his ass had he misbehaved in the same way his friend did.

Second, I don’t seem to get that same reaction when it comes to discussions of group spankings.  There has to be some actual authority being exercised over the husband for the scene to give me any real emotional reaction.

Third, I seem not to be the only one for whom being subject to someone’s authority is more threatening to the ego than simply being spanked in front of witnesses.  Or, perhaps the issue is that some of the wives find it easier to spank in front of someone than to exercise verbal authority publicly. I noticed that multiple people had attended spanking parties or been involved in some kind of group spanking activity, yet those same people had not been subject to some overt show of authority. 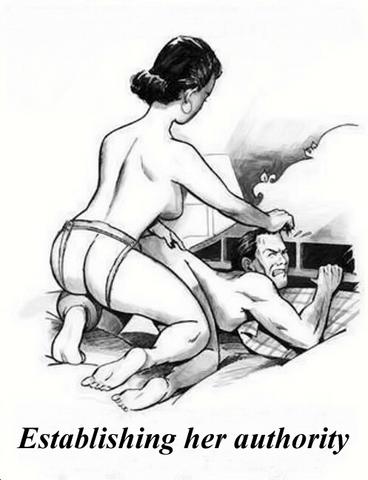 For me, I think these two aspects of DD and FLR relationships—authority and embarrassment—are intimately connected.  While I don’t like seeing other people embarrassed, part of me clearly gravitates toward the prospect of being embarrassed by my wife showing authority over me. As I said to ZM in a comment, I don’t think it’s a coincidence that most of the few spanking dreams I have involve spankings that are about to be carried out in situations in which others know it is about to happen or involve others finding out that I’m a spanked husband.

Relatedly, while last week’s topic centered on various scenarios regarding “openness,” I think the reason I am attracted to openness is not so much a desire to communicate about DD but, rather, something more along the lines of this other excerpt from ZM’s comment:

“But either way, whether given publicly or privately, the one common factor in school spankings in both countries is EVERYONE knew about them, and there was enormous embarrassment and teasing (sometimes met with some arrogant pride) for the unfortunate recipient.

I think this is what I really want and crave, though can of course never fully experience. I want spanking to be common and acceptable enough, at least within a small, selected group of people - or even one person - around me, that when a spanking occurs, it can be openly talked about and laughed about, with all the surrounding feelings, embarrassment, shame, and teasing. But on a wider scale, I kind of want DD to remain a shared naughty secret.” 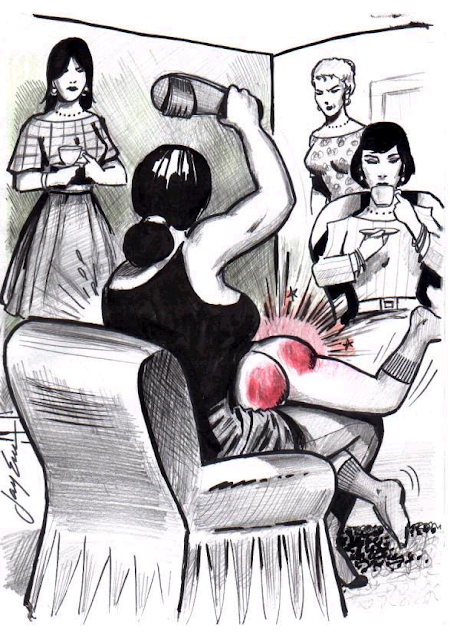 Further, someone else knowing about it doesn’t have the emotional force if I’m the one doing the disclosing.  T’s scenario, on the other hand, does have some emotional force for me, even though it didn’t involve any real spanking at all and, instead, only a statement from his wife to a friend that his wife would have spanked him under certain conditions. The conversation was itself a demonstration of authority.

So, for me, embarrassment that stimulates an edgy reaction seems to require both some openness about having been spanked or the prospect of being spanked plus some expression or communication about it that reflects my wife’s authority.  Alan’s reference to Tomy being sent to another wife for a spanking really hits me, because it involves such an open show of authority by both wives.

In addition to the power exchange involved, I think these instances of what I guess you could call “imposed openness” involves wives who seem to have no shortage of confidence. They impose these instances of openness because they are so supremely self-confident that they have the authority to do so.  Exercising that level of self-assuredness is, to me, incredibly sexy. 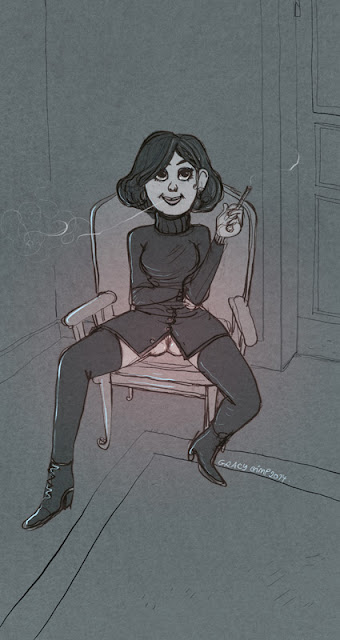 As I was thinking about this, I thought about a topic I think I’ve covered only once, back in 2015, namely “bitchiness.” I think many women struggle with overt displays of authority, because they have concerns about being perceived as bitchy.  Yet, I think getting over that concern is probably necessary to really taking the reins, whether in a marriage or a career.  Here is a slightly edited version of part of the post from 2015:

“A few weeks ago, I was at a happy hour with a group of younger members of my office. A discussion ensued in which a couple of our high potential, but somewhat junior, female leaders bemoaned the fact their male subordinates treated them with less respect than they showed to male superiors, including not doing their work in as timely a manner, reacting badly to constructive feedback, and not prioritizing their work assignments.

I asked what seemed to me to be a fairly logical follow-up question: "Why do you let them get away with it?  If you repeatedly let them treat you with disrespect, don't you share some of the blame for letting that power dynamic fester?"

An awkward silence followed.  So, I pressed forward a bit, pointing out that it isn't like they don't have tools at their disposal to slap someone down if they are ignoring orders, not responding quickly, etc.  Pull them into your office for a stern lecture, don't put them on key projects, give them a lousy annual review, etc.  If these guys weren't showing appropriate respect to female superiors, then why weren't those superiors making them pay a price for it?

After another uncomfortable silence, one of them offered up a very honest answer: "Because they will see me as a bitch and call me one when I'm not around."  To which I answered, "So?"  Another awkward silence.

They continued to insist it just isn't the same thing, and I continued to ask why, without getting much more than, "It just is."  It was one of those discussions where the perspectives of the people on opposing sides of the conversation were just so different that there plainly wasn't enough common ground for us to really get anywhere.  So, we dropped it and went back to talking about whatever.” 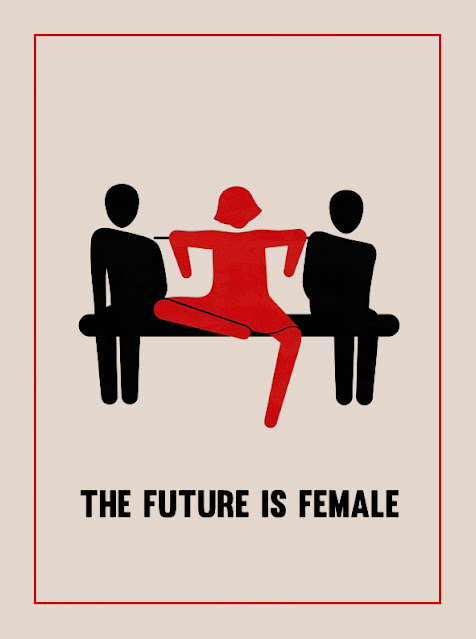 I do think that women generally worry way more about being perceived as bitches than they should.  Certainly way more than most men worry about being called “dicks” or “assholes.”  Or, at least men seem to be more willing to get past their concerns to get the job done.  Am I right about that?

I hope we’ll get a few wives joining in for this discussion.  Is the prospect of being seen as a "bitch" or being overly assertive an impediment to taking on a DD or FLR leadership role?  Do you hold back in ordering discipline or in making decisions in your relationship because you are, deep down inside, concerned about being seen as "bitchy" or overly aggressive? Do you have those feelings even if he has told you he wants you to be more stern and strict? Do you think that maybe, given his desires to be in a DD or FLR relationship, he might actually get off on overt, stern, aggressive displays of authority? 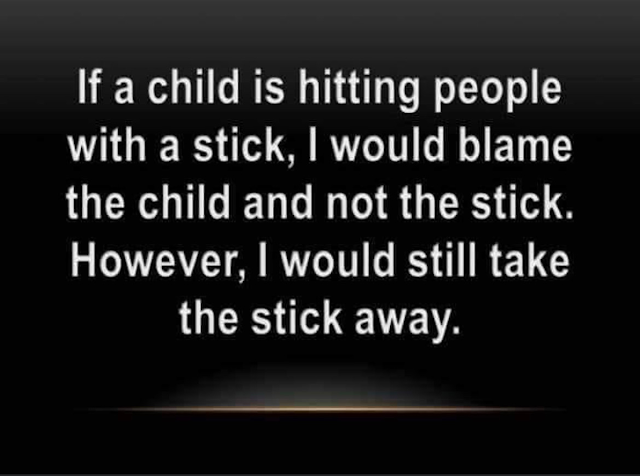