Reasonable orders are easy enough to obey; it is capricious, bureaucratic or plain idiotic demands that form the habit of discipline. - Barbara W. Tuchman

Mine finished better than it started.  I reported a couple of weeks ago that after making some substantial progress on the behavior front, particularly with respect to over-indulging, there had been some troubling signs of backsliding.  Unfortunately, it happened twice over less than two weeks, with Anne present at both. The first was a work event that turned into a total booze fest.  Anne and I left by 10:00, and the party was still in full swing.  Then, last Sunday we had dinner with friends, and the husband was very diligent in refilling glasses.  The result was a painful Memorial Day.  In more ways than one.  I’ll explain in more depth, as it relates to where I am going with this week’s topic.  It also serves as a bit of a follow-up to last week’s topic as well.

Anne wasn’t mad at all about the first incident.  I really wasn’t drinking much more than others we were hanging out with, and at no point did I get out of control or do anything embarrassing.  So, it really was a “problem” only in that I really have been trying to learn to moderate, and there was not much moderation on display that evening.  She wasn’t mad about the second event either.  I wasn’t really drinking more than the other couple—or at least the husband, who was the one who kept pouring—and I again didn’t get out of control.  But, when we got back home, I decided I wanted to stay up and listen to music, which is always a bad idea for me and almost always results in even more drinking (alone) and a very tired and painful morning.  Therefore, she insisted I come to bed.  I eventually did, but only after a fair amount of initial resistance. 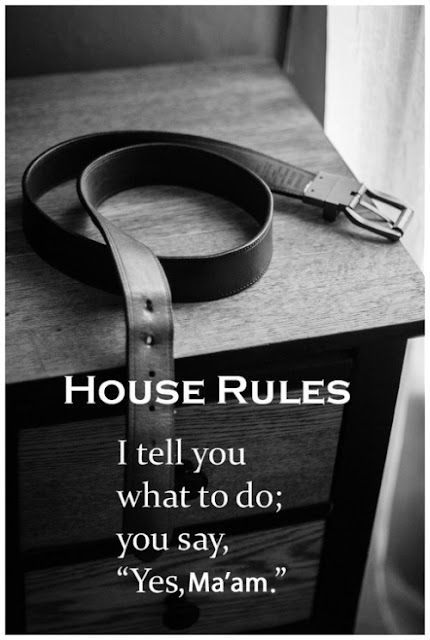 So, the next morning she announced that I was going to get spanked that night.  I didn’t really argue or try to get out of it.  In my mind, I deserved it for failing to moderate my drinking on not just one, but two, recent occasions.  But, in announcing that I was going to be spanked, she did not link it to the over-indulgence.  In fact, she said she wasn’t concerned about my behavior at dinner the night before. Rather, she was going to spank me because I didn’t mind her when she told me to go to bed.  I was to be spanked for disobedience and for not complying with something she told me to do or doing so only after first resisting and evading. 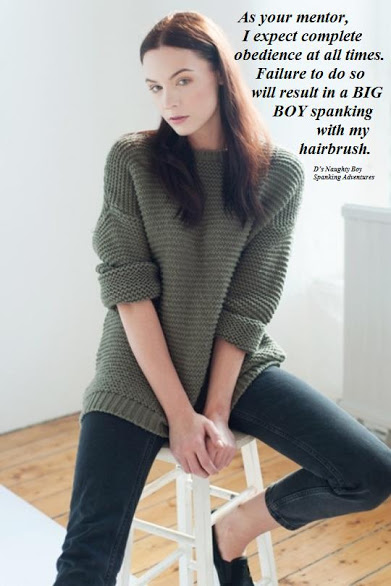 I thought about trying to get out of it for at least a day, as I really wasn’t feeling great most of that day. But, I also kind of wanted to take my medicine and get it over with.  As with the last time she spanked me, she used the vintage hairbrush, and this time we also tried it OTK.  For someone wired as I seem to be, it was a pretty powerful combination, emphasizing her feminine, maternal authority.  OTK with a hairbrush is about as iconic as it gets where maternal spankings are concerned, and adding to that dynamic in a major way was the fact that I was being spanked specifically for not minding her when she told me to go to bed.  We talked about it after it was over, and she agreed that the position added to the dynamic and reinforced her feeling of authority. 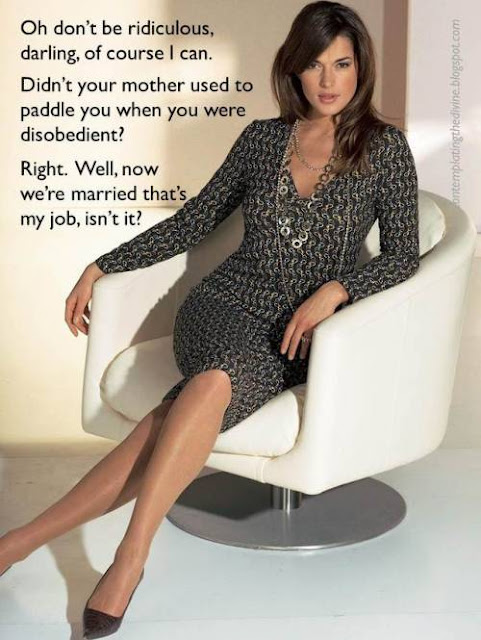 She also noted that using a single instrument that was readily available (we had been leaving it in open view on the bathroom counter) and a simple position, with her sitting on an ottoman that was already in place, just made the whole thing easier for her.  In the past spankings have always been kind of a ritualized event, with me going upstairs, setting up the ottoman in the middle of the room and putting pillows in it to elevate my butt.  Then, I’d get out a suitcase in which we keep her tools.  I would disrobe.  She’d come up and lecture, then tell me to get in position, then she would work her way through a variety of tools. . ..  It kind of went on and on and on, taking a lot of time and preparation.  I had suspected for a while that all the ritual might be getting in the way of consistency, because if each spanking was such an event, it might come to seem almost like a chore.  It sounds like she is now seeing it that way as well, as she commented that this simplified process will probably make it more likely for her to spank more often and more immediately after the offense. 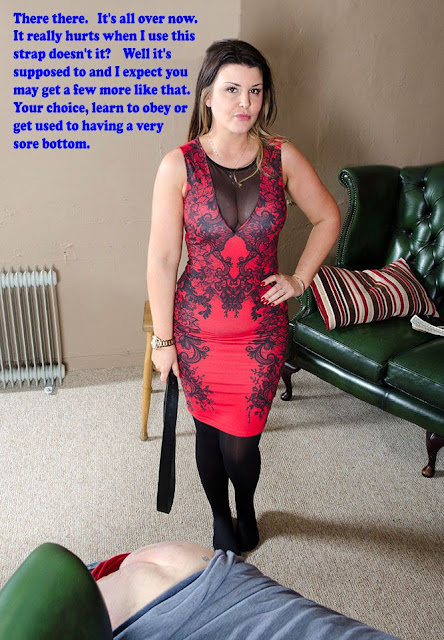 I don’t really have a set topic for this week and welcome any comments on the above or any thoughts that it raises.  In preparing to write the post, I looked back at past posts that might touch on similar themes. I was a little surprised to discover that even though we talk a lot about authority, obedience and related themes, I really have not devoted many actual topics to them.  This week’s spanking puts authority issues—maternal or otherwise—front and center in my mind.  There definitely was an added emotional element connected to the fact that she was spanking me specifically for not obeying her instructions.  For not “minding” her as the parents would say in my part of the country.  Some of these authority issues were also plainly on the minds of our commenters last week.

I think the routine we have established of paddling him every Monday (except when the kids aren't in school) has been good for Art. He knows what to expect. And it is good for me too, to remind myself of the authority I now hold in our marriage. I don't have to and won't accept his arrogance any more. Maybe we both need weekly reminders of that! Belle’s comment about Jimmy not liking the idea of preventive spanking suggests another benefit of the practice that I hadn’t really thought about. But it teaches obedience especially when a husband initially thinks the spanking is unfair or unwarranted – but still submits to her authority. Thinking back I have probably learned more about obedience in those situation where I have been punished despite disagreeing with her reasons. As I have mentioned before and several other husbands have also recounted, it is amazing how often a guy moves from resisting a punishment before it happens to admitting it was necessary afterward. My feelings before a spanking are completely genuine but a brush or paddle (or strap) are great persuaders as well as great truth serums.

Alan’s comment nicely ties together last week’s “preventative” spanking topic with this week’s emphasis on authority and obedience.  As a short follow-up on the former, after drafting that post I thought several times about asking Anne to spank me prior to both gatherings where I ended up over-indulging.  One would have been logistically difficult, but one would not.  I honestly regret not following through, because I do think that a preventative spanking would have helped me make the alcohol consumption more mindful, i.e. I would have thought more as I was drinking instead of just feeling the ill effects after the fact.

On a non-spanking topic, the world continues to open up, thanks to increased vaccination rates.  Thanks to this new freedom of movement, we may be out and about—and largely offline—for a week or two.  So, I may not post for a couple of weeks; I intend to play it by ear.  By the way, for those on the fence about whether to have kids vaccinated, this from Benjamin Franklin. 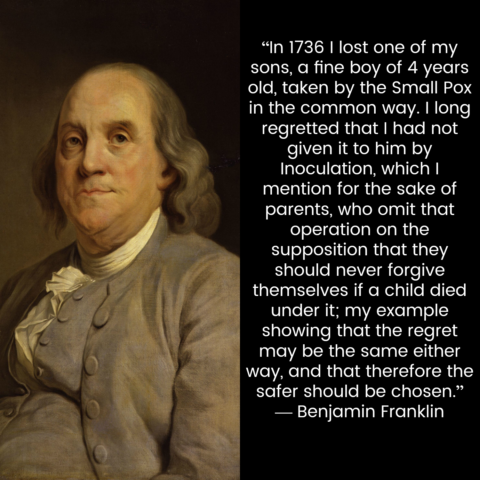 [Those who have tried to politicize vaccinations, sometimes citing the Founders’ supposed superior devotion to personal liberty, might want to do some reading up on George Washington’s use of smallpox vaccinations on his soldiers during the Revolutionary War.  There is a pretty good argument that we won that war not because of Washington’s superior battlefield acumen but, rather, because he did a much better job than his British counterparts in responding to the pandemic with vaccinations and social distancing.]

I hope you all have a great week.
Posted by Dan - A Disciplined Hubby at 3:26 PM