The Club - Meeting 355 - Before and After Thoughts

“Wishes are brutal, unforgiving things. They burn your tongue the moment they're spoken and you can never take them back.” - Alice Hoffman

Hello all.  Welcome back to the Disciplined Husbands Forum. Our weekly gathering of men and women participating or interested in Domestic Discipline Relationships. I hope you had a good week.

Ours was really rough.  Every time I think this year just can’t possibly get any worse, somehow it does.  It wasn’t a great week for the country either.  Or at least for half of it. 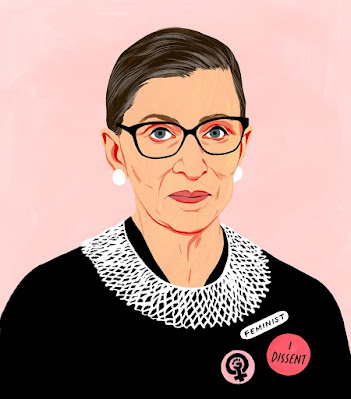 I’m also sitting here on a pleasant Sunday feeling particularly bad about my own personal behavior.  Early in the week, I was really trying to turn a corner on getting some nagging health and behavior issues under control, yet with another weekend came another big fail.  It has me thinking again about “zero tolerance” policies, stern and strict discipline, etc.  But, the challenge is, of course, finding the right enforcement or incentive structure – something that has eluded me for years now.  I was thinking about some of this earlier in the week when watching the HBO series The Vow, which is about the Nxivm “personal empowerment” that billed itself as an “Executive Success Program,” that also had earmarks of a pyramid scheme, and had within it a small group of women that took personal power in a very Domestic Discipline direction.  As some of you may recall, I got intrigued this several months ago and about the philosophy of self-improvement described in this New York Time article.

https://www.nytimes.com/2018/05/30/magazine/sex-cult-empowerment-nxivm-keith-raniere.html.  What really intrigued me was the whole thing sounded so . . . disciplinary.  It was all about finding sufficient leverage to overcome those self-limiting habits or establish better ones.  Apparently, I was right in intuiting a very DD-like connection.  In the most recent episode, a woman talked about the communications between her and the woman above her in the hierarchy and the kind of structure and discipline that was imposed.  The producers displayed a series of texts between them.  It isn’t clear from the exchange what the underlying behavior was. 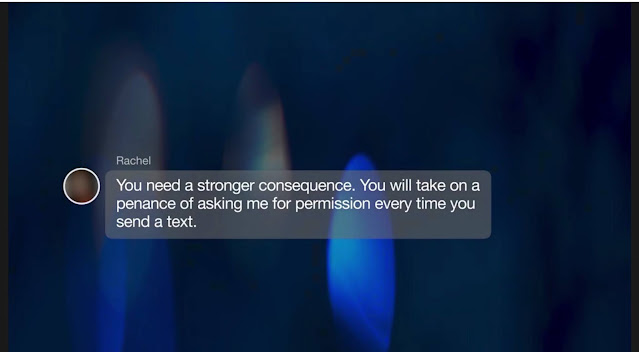 But, it becomes VERY clear what the consequences of not complying with the rules would be. 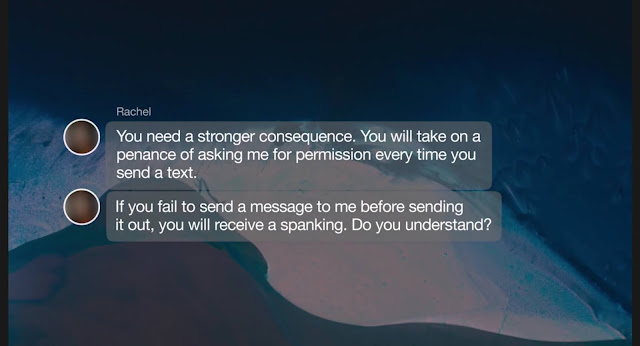 So, I exit this week and enter a new one pondering whether there is some system or set of procedures I can put in place to finally get enough leverage over myself to put an end to some of the behaviors that have chronically caused problems for myself and others.  I’m mulling some options, though the linchpin has to really be execution and follow-up.  I’ll keep mulling and think and, hopefully, report back where we end up.

In the meantime, the events of this week left me pretty empty of when it came to topic ideas.  Thankfully, one of our commenters provided me with one.  A couple of weeks ago, Belle suggested the following:

I want to suggest a possible topic because I am curious about this and believe it is probably much more intense for other couples than it currently is for us: What are the thoughts and feelings that both husband and wife think and feel immediately before and immediately after punishment? Describe them in exquisite detail. Before punishment means from the time a spanking is announced until the first spank lands, so including getting implements, lecture, removal of clothing, positioning of the husband, etc. After punishment means from the moment the last spank lands until the couple is back to normal, including cornertime or any meditation time, putting clothing back on, talk about the punishment, cuddling, sex triggered by the punishment, etc. 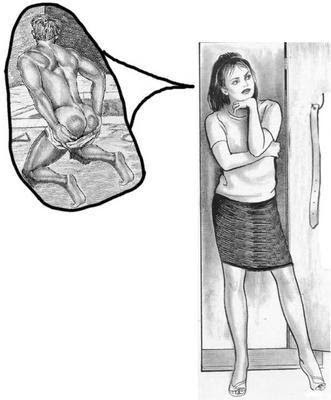 For me, the most consistent aspect of my thought process is really the gap between what I am thinking immediately before a spanking is announced and what I am thinking right after the announcement.  Particularly when I am in a remorseful mood or angry at myself for some behavior failure, I’m often actively thinking about how I really deserve one, hoping she will order one, etc. Then, after she announces one is coming, all that just vanishes completely and I become laser focused on how much I do not want to be spanked.  Even when I know an announcement is likely coming, my stomach still jumps to my throat when it actually comes. 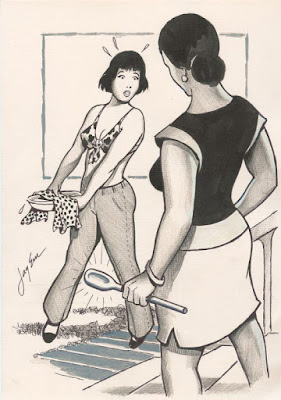 I suspect that for some husbands, there is a desire to just face the music and get it over with soon. That virtually never happens with me. From the moment one is announced, I switch into avoidance mode and begin hoping that something will happen that interferes with execution of the sentence.  It’s pretty rare that she tells me in advance exactly what time it will be carried out, so I often have an hour or to stew and think about what is coming, then at some point she will either come downstairs and announce it is time for me to come upstairs and get ready or she will send a text to that effect.  Regardless of the form of that communication, in that moment I go from a kind of low level dread to a kind of resigned “I really don’t want this, but here we go.  . . .” Our routine is so ritualized, from that point I’m kind of on auto-pilot.  Without being ordered to, I retrieve the suitcase in which we keep the implements, put it on the bed and open it.  I then pull a large ottoman into the center of the room and put a large cushion on top of it.  I then undress and wait for her to come out.  During that process, I’m usually thinking about nothing other than how much this is going to suck, though I sometimes try to make myself think about what I did to get myself into this situation.  It really stays that way until the first spank lands. 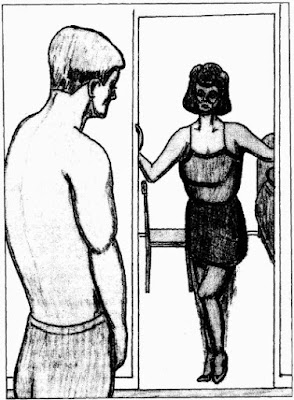 Belle also asked about the thought process from the last swat onward until things are back to normal.  When she tells me it’s over, my first thought is usually just plain old relief, though every once in a while I feel disappointed if I feel like the behavior really deserved a longer spanking.  Since most of our spankings happen shortly before our usual bed time, and since we often but not always do have sex, I will often ask for her direction on whether we are having sex.  If so, I usually don’t undress.  I put away her tools, put the ottoman back in place at the foot of the bed, etc.  During that process, I’m generally not thinking about what just happened.  It really is like the slate has been cleaned.  When we get back in bed, however, we often do talk about the spanking she just delivered.  I’m usually feeling very loving and attracted to her in that moment.  There is something so very attractive about her willingness to exercise her power like that.  That period right after a spanking is probably the closest I ever get to feeling “submissive,” though the better word probably is “humbled.”  It’s like a lot of the male ego, stress, anxiety, etc. just vanishes.

How about you?  What are you gentlemen thinking about during that after a spanking has been announced but before it has been delivered?  What about immediately after?

How about our Disciplinary Wives? What are you thinking about during the lead up to announcing a spanking?   What about when you are actually communicating your decision to give one? 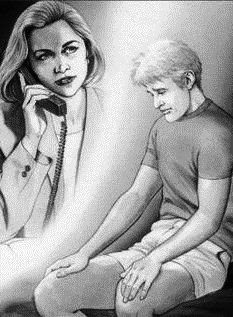 Has it changed over time?  Have you gone from tentative to confident? 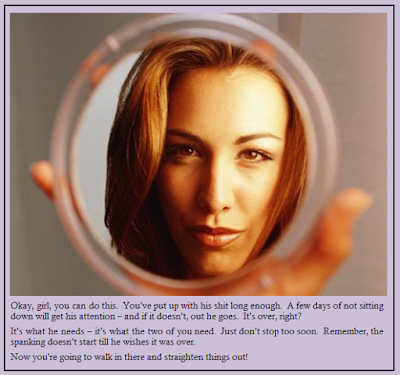 How about when you are ready to deliver? 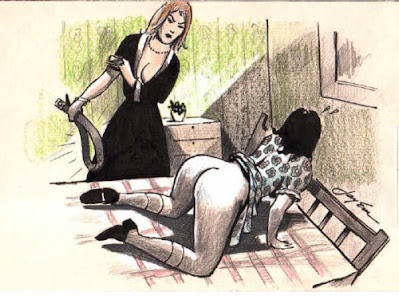 How do you feel after you’ve taken care of business? 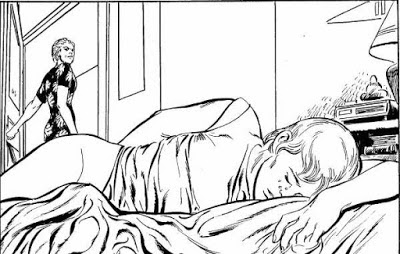