Hello all.  Welcome back to The Forum.  Our weekly gathering of men and women who are in, or interested in being in, a Domestic Discipline or Female Led Relationship.

First, a shout-out to a fellow blogger who is in a DD relationship, but one of the M/f variety.  I have pointed to J Girl's blog, The Taming of the Shrew, a few times before.  Earlier this week she posted on a topic she entitled The Three Stages of a Dominant Submissive Dynamic.  https://ashrewtamed.blogspot.com/2017/03/hey-there-readers.html.  I thought it was an incredibly thoughtful portrayal of some of the ups and downs that real-life DD relationships almost inevitably go through.  Though, I will have to take her word on what Stage 3 might look and feel like.  We are, at most, somewhere in Stage 2, and I don't know whether we would actually want to take it to the Stage 3 she describes.  Perhaps.  But, it's hard to say.  I can't rule it out, since it was just a year or so ago that we started going beyond DD to a deeper Female Led dynamic.

This was one of those weeks that makes me question sometimes the extent to which I really do want this kind of relationship, while at the same time affirming why I need it.  It has been a couple of really tough weeks at work.  I've been traveling constantly.  Lots of after work socializing. I also had one of the people on my team go into full-blown Drama Queen mode, requiring me to play career counselor over several beers.  My way through all this was to go way Alpha, powering through this pretty dysfunctional time by sheer force of will powered by adrenaline and caffeine, followed by a lot of bad airplane wine as a stress reliever.  For a while, I actually started thinking, "This is who I am.  Part of me likes being this way, and it makes me good at what I do.  Maybe I just need to embrace it instead of trying to balance it or contain it."  Which is all well and good, until I hit a Saturday like this where I am so tired that it really feels almost like a form of psychosis, and I realize that living like that just isn't sustainable, and eventually something is going to break or I am going to break something or someone in a way that can't be fixed.  So, as much as I really don't want to be controlled or contained right now, I know that I need to be, and that I will be healthier for it.  But, I come to this realization just as Spring Break starts, meaning kids will be underfoot almost non-stop, making it harder for her to assert herself and get me under control.  Again, real life interferes with the fantasy. 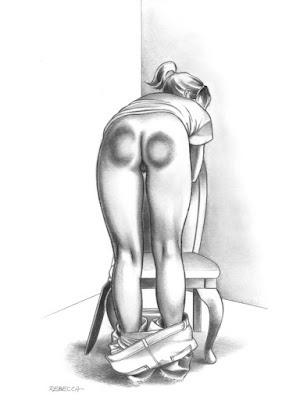 (Yes, I realize this is a female bottom, but we do have a few M/f or F/f visitors.  And, this one was just too enticing not to share.)

Is marking or "blistering" an explicit goal?

When it is over, does your Disciplinarian inspect her handiwork? 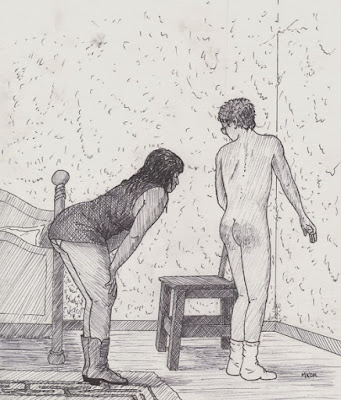 Does she take pride in the tangible evidence of a job well done? 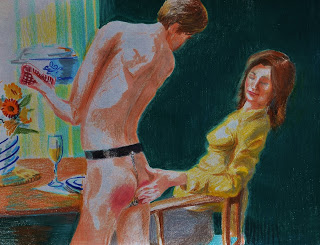 (He will correct me if I'm wrong, but I think this one is one of our KD Pierre's pieces.  I have a link to his website over to the right.)

This is an area that has changed for us over time, not as a result of any change in the intensity of her spankings, but apparently due to a change in my physiology.  When we first started Domestic Discipline, any significant spanking would leave me very badly bruised.  That doesn't happen nearly as much now.  Even a really, really hard spanking may leave me with only a few visible marks the next day.  Interestingly, my bottom does look in bad shape immediately after the spanking, but the marks just don't last very long.  It also seems like my bottom has developed this non-bruising tolerance specifically to spanking.  I took a nasty fall a few weeks ago, and it left me literally black and blue across one cheek.

My wife's reaction to this is also interesting.  It really didn't take her very long to get comfortable with giving a hard disciplinary spanking, and the bruising or marking has never seemed to make her squeamish.  She is very comfortable leaving visible evidence of her spanking prowess. In fact, she will sometimes make me drop my pants to show her the condition of my butt, and will express disappointment when the marking is gone a day or two later.

I hope you all have a great week.  As always, if you are new to this Forum, please take a moment to visit the Guestbook (tab above) and tell us a little about yourself and your DD or FLR relationship or aspirations.
Posted by Dan - A Disciplined Hubby at 8:43 AM