“Submission is not in the bowing of heads or knees but in the humbling of your whole being (spirit, soul and body)” - Ikechukwu Izuakor
Hello all. Welcome back to The Forum: Disciplined Husbands & Disciplinary Wives.  Our weekly gathering of men, women and couples who are in, or would like to be in, Domestic Discipline or Female Led Relationships.

I hope you had a great week.  Mine was busy and filled with distractions, yet I also felt very unproductive.  I just can't seem to get motivated to take on 2017 and feel like I've kind of already frittered away one-twelfth of the year.  But, like I said, if you are going to stumble, do it early.  Just hope stumbling doesn't become lurching from one stumble to the next throughout the year.

For reasons I may go into in a future post, what I really want to talk about this week is undeserved punishment.  It is a subject that resonates strongly with me as I go into this weekend.  But, we have adone that one within the last year, and I also just need some objectivity before getting into it.  So, instead, this week's topic is an offshoot of some of last week's comments.  Darren brought up that his wife is starting to talk like a budding Disciplinarian, saying things like "You deserve to be paddled for that."  But, the follow-up isn't always there.  Anna suggested that at those times, he might respectfully ask whether he should get the paddle or remove his belt, or words to that effect.  That discussion led Alan to observe:

"I strongly agree with Anna's advice. At the beginning of my relationship with the woman who introduced DD, she would often make remarks like your wife does such as " you should be spanked for that" or " someone needs a spanking." Ultimately I realized it was sort of a negotiation conversation going on in which she was testing the waters to see if I would submit. Remember this was early and she was still uncertain (later that uncertainty goes away pretty fast). But think of it as a conversation asking a question and you supply the answer that encourages and reassures her. It might not guarantee a spanking this time but will greatly increase the chances one will be in the offing.Women who are not experienced disciplinarians want to know you will submit to their authority. Incidentally offering to bring her brush or simply answering " yes ma'am" to her was very effective in those situations"

As Disciplined Husbands or those who want to be in such a relationship, many of us crave accountability and strong female leadership. We want consequences for our actions, and it is important that they be imposed on us.  The more we have to ask, or suggest, or manipulate the situation to lead her to deliver some real punishment, the less it meets our need for real accountability and yielding to another person's will, because it is still really us controlling the situation. But, the reality is, while lots of stories in DD books and websites involve a strong woman getting fed up with her weak or ill-behaved husband to such an extent that she just suddenly takes over and blisters his bottom, in real life it doesn't seem to happen that way very often. Instead, far more often the dynamic involves the husband asking his wife to consider disciplining him, and she accommodates it but with some degree of trepidation, uncertainty and doubt.

So, while I always hope that budding Disciplinary Wives will be inspired by quotes like this, 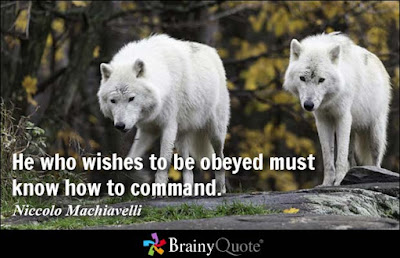 the reality may be much closer to what Alan is describing -- a series of "testing the waters" exchanges, with her testing to see how serious he is about all this and trying to "level set" on how far he really wants her to take it.  In those cases, it may very well be that while we husbands really want the command to precede the obedience, the commands may start coming only after we demonstrate our willingness to obey.  While the fantasy is that dominance precedes submission, maybe in reality we have to do the opposite?

Is that the way it really does work?  If so, are there things you have done to demonstrate your real willingness to submit or to convince her that your desire is real and that the authority you are asking her to assume won't be taken back the first time she really steps up and tells you to do something you don't like or gives you that real disciplinary spanking that you say you want?  As I hope people saw from the last couple of postings, I am very into concrete steps, i.e. specific things we can say and do to move the ball forward in these nascent DD and FLR relationships.  So, let's get into the details on things you have done to demonstrate real commitment putting her in charge and accepting your role.  Ladies, how do you feel when your husband displays that submission or makes subtle, or not so subtle, suggestions that you carry through and spank him for something that he's done to deserve one?  Does it encourage you, or does it feel like he's trying to take over?  In an ideal world, how would you like him to demonstrate his willingness to submit to your commands or take a real disciplinary spanking from you? What would give you additional confidence in taking over or delivering the discipline he wants and deserves?

I hope you all have a great week.  If you are new to this Forum, please take a moment to visit our Guestbook (see tab above) and tell everyone a little about yourself and your Domestic Discipline lifestyle or aspirations.  Also, please note the poll posted in the upper-right corner of the blog and take a minute to vote.
Posted by Dan - A Disciplined Hubby at 9:35 AM