The Forum - Vol. 189 - Am I Getting Through to You? Repeat Offenses

The events we bring upon ourselves, not matter how unpleasant, are necessary in order to learn what we need to learn; whatever steps we take, they're necessary to reach the places we've chosen to go. -- Richard Bach

Hello everyone.  Welcome back to The Forum - Disciplined Husbands & Disciplinary Wives.  Our weekly gathering of men and women who are in, or interested in being in, a Domestic Discipline or Female Led Relationship.  I hope you all had a good week.

Although we didn't set a record for the number of comments by any means, I thought last week's discussion on embarrassment and humiliation as potential DD tools was a good one to explore.  It's clear that the potential for being embarrassed by having our wives' authority demonstrated in public is disconcerting and threatening to many of us, particularly if it were to include a revelation that we get spanked for bad behavior.  And, it's not just in "public."  We are just as mortified about our kids or close relatives or friends finding out.  Maybe more so.  As I said in responding to a comment from Marisa, however, it's interesting that the likelihood of someone finding out about our spankings is kind of within our own control, since for those couples using spankings as real punishment for real offenses getting punished is, to a large extent, within his own control, because we could avoid it by behaving better.  It's also kind of interesting that one reason couples try so hard to avoid having their kids overhear a spanking is because of the embarrassment it would cause Dad, but in doing that they are really choosing to place an upper limit of sorts on the punishment he is subject to, by taking inter-family embarrassment off the table.

I was mulling this all a bit this morning while thinking about possible topics and looking for appropriate quotes.  During the course of that, I found this one from a book by Stephen King that would have been perfect as the headline quote for last week:

"A man who can't bear to share his habits is a man who needs to quit them."

Then there was this quote from Marisa:

"I am weary of punishing him repeatedly for the same behavior. I know especially if I spank him in front of another male or couple ( no couple now is available but a male is), Jay would do anything in his power to avoid a repeat. I am not suggesting anyone else try this and it is risky which is probably why I have not already used it. But sooner or later a wife gets tired of revisiting the same issues ( I hear some of this echoed in Anna's remarks above). I am not going to divorce him while spanking still works but I am going to find a way to beat his ass that lasts a long long time."

So, how do wives deal with repetitive bad behavior?  One possible solution that may, or may not, work is consistency, i.e. making sure that discipline actually is meted out consistently every time the problem behavior occurs.  I do think the lack of consistency has been a big problem for us over the years, because in the back of my mind I know that when it comes to certain bad habits and behaviors, the odds of escaping punishment are really kind of in my favor. 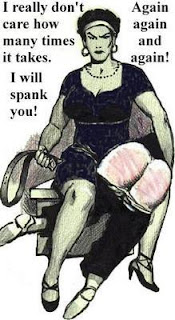 If consistency doesn't seem to work,  is it a matter of cranking up the severity? 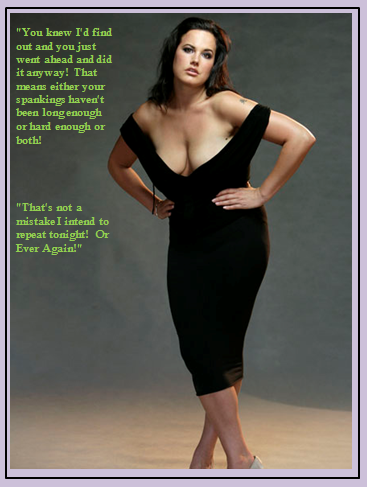 Or, maybe one spanking for one offense just isn't enough for really deeply rooted behaviors? 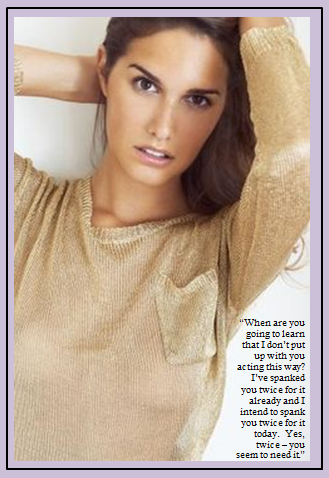 Or, more to Marisa's point, if spankings are not working, does a true Disciplinary Wife need to take things to not just a new level, but in an entirely different direction?  In other words, does she in fact need to find something that he hates or fears even more than being spanked?  Like, taking him downstairs or upstairs for a hard paddling or strapping even if kids are in the house and might overhear? Or letting him know that if he does it again, she will tell a friend or relative that he gets spanked or, worse yet, do it in front of someone else?  Or, perhaps she starts grounding him or taking away privileges?

So, what happens, or should happen, if "normal" spankings don't seem to be getting the point across?  Any suggestions from experienced wives or from men whose wives finally cranked it up enough to really make him avoid the bad behavior?

I hope you all have a great week. And, if you are new to this Forum, please take a minute to go to the Guestbook (tab above) and tell us a little about yourself and your DD or FLR lifestyle or aspirations.