"An ounce of prevention is worth a pound of cure." -- Benjamin Franklin

Hello all. Welcome back to The Forum - Disciplined Husbands and Disciplinary Wives, our weekly gathering of men and women who are participating in or interested in being in a Domestic Discipline or FLR relationship.  I hope you had a good week.

Our own DD and FLR momentum continues to be checked by the irresistible force of these nasty cold/flu bugs that are going around.  I've had mine for 13 days and, while feeling slightly better, it is still holding on tenaciously.  My wife has also been pummeled by it, so we are coughing, sniffling, not very pleasant to see or hear mess right now, and neither of us has the slightest interest in anything FRL related right now.  Being sick also tends to slow me down a bit on the bad behavior front, and I managed to make it through a lengthy business trip with colleagues without over-indulging or committing any other work-related bad acts.  Though, if we were keeping a strict tally, I am still owed some major discipline from a week ago, thanks to my workplace's annual holiday party, which for reasons unknown set a new bar this year for people toasting the season in high spirits.

Preventing such party-related bad behavior is part of this week's topic.  Last week, Alan brought up the topic of "preventative spankings," characterizing and illustrating their effect as follows:

"These are spankings administered before parties or events in which historically my behavior had earned me a spanking after the fact. Her reasoning was that if she was going to have to spank me eventually, she would prefer to avoid the behavior and get it done before rather than afterward. Most preventatives are done several hours before a party or we get into the car to travel and designed to give me a warm bottom that reminds me what could happen. With one unforgettable exception this does work to prevent really bad public behavior. It does not always make my behavior perfect but I am careful enough that she is satisfied.There are now three or four of these scheduled before holiday events and they have become so routine she actually often puts them on the calendar.This gets to your point about that second ( or third) drink just pushing the reality of future punishment out of your mind.) The reality of punishment is very much on your mind after a recent spanking ( For me that feeling lasts at least two or three days) So sipping your drinks, avoiding family confrontations and boorish behavior is much easier.'

We have never engaged in this kind of preventative discipline, and I used to think it was not very consistent with Domestic Discipline, since it involved punishing before anything had even happened.  But, Alan's comment has me rethinking it.  (Something I love about this blog,  by the way.  My assumptions and predilections often get challenged and I'm forced to rethink some of my shoot-from-the-hip reactions.) As I explained in last week's post, even after a decade of Domestic Discipline it is not uncommon for me to just kind of blaze right through the behavior limits she has set without even thinking about the possible consequences.  Socially-induced amnesia of a sort.  But, I can see how a spanking before the event could serve as an ongoing reminder of the much more severe one that might be coming if I misbehave. 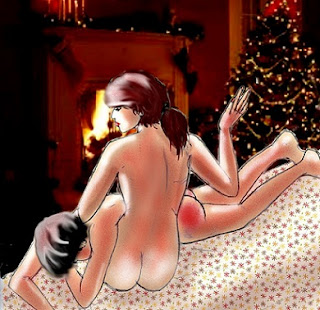 I can foresee some practical problems, however.  For example, because we both have substantial commutes from work to home, and social events are often scheduled near work or at colleagues homes, one or both of us often go directly from work to the event, so we often arrive separately at holiday parties and work-related events, without first having time alone at home.  For those occasions, a preventative spanking would probably need to happen the night before the event, and I don't know if that would still be effective. Or, it might have to be a full-blown punishment spanking sufficient to leave me sore enough the next day to still serve as an ongoing reminder during the party.

So, for this week's topic, have you used preventative spankings?  Have they worked to prevent problem behaviors?  What are the logistical challenges and how have you overcome them?  If you haven't used them, do you think they might be worth trying?

I hope you have a great week.  If your are new to this Forum, please take a few minutes to visit our Guestbook (tab above) and tell us a bit about your DD or FLR relationship or aspirations.