"I'm tough, I'm ambitious, and I know exactly what I want. If that makes me a bitch, okay." ―Madonna

Hi all. Welcome back to the Disciplined Husbands Forum -- our weekly gathering of men and women participating or interested in Domestic Discipline or Female Led Relationships.  I hope you all had a great week.

Shakespeare asked "What's in a name?"  Apparently, quite a bit where a blog's masthead is concerned.  Some of you may have noticed a subtle change to the title posted at the top of the blog.  The former Disciplined Husbands Forum has become "The Forum - Disciplined Husbands & Disciplinary Wives." It was one of those things I just decided to do, without putting a huge amount of thought into it.  It just seemed like time for a small tweak to signal that we welcome discussion from those on both ends of the disciplinary paddle.  In all honesty, I've never been all that wild about the original title anyway.  It really began as a compromise.  I wanted the blog to focus on domestic discipline (obviously) but I didn't want to step on the toes of the Disciplinary Wives Club, so I stayed away from the terms "wives" and "club."  I've gotten over some of that reticence or concern that this might be seen as a DWC rip off, as this blog found its own readership and as it became more and more clear that the DWC wasn't going to be updated anymore.  So, I made the Masthead change early this week, and with that one change, daily readership popped up by about a third.  The jury is out on whether that is a good or bad thing.  I like the thought that maybe this blog influences a few people to try the DD lifestyle, similar to the awakening the DWC provided for me.  On the other hand, the wider the readership the more trolls it attracts and the more it pops up in links on sites that may have material that isn't something I really care to be associated with.  But, I do think trying to be more openly inviting to women who are or might be into this is worth it.

Enough chatter about the blog.  I'm still having some serious writer's block, struggling to come up with new topics.  Hopefully some new ideas will arise, though there probably is some hard limit on how many original topics there can be for a blog devoted to a fairly tightly-defined relationship activity.  Now, thankfully, as our community has grown and more people chime in with comments, something worth exploring a little more often comes up. 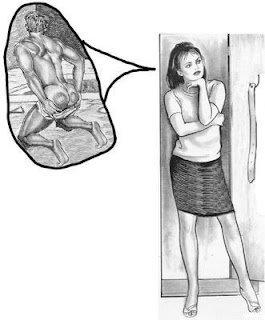 This week's idea came from Darren, one of our newer commenters who has been hoping his wife will come to really embrace domestic discipline.  Last week he asked, "Was there a moment all the talking you had been doing as a couple all of a sudden made sense to her? And in that moment for the first time "reflexively" went to spanking as the natural resolution in the moment."  A couple of people answered, but it seems like a question that merits an independent topic.  Was there a particular moment or event when your partner really "got" the role of disciplinarian, such that spanking you for real became her natural reaction to bad behavior?

A note on the Guestbook.  There are a couple of ways to do page tabs in Blogger, like the Guestbook and others at the top of this page.  Unfortunately, the one I originally chose for the Guestbook is kind of a pain, and as the number of comments grows, it got more unmanageable.  So, I have put up a new version, copying and pasting all the old entries into the new form.  Unfortunately, doing that doesn't preserve the profile links for those who didn't post anonymously.  But, the comments themselves are there.  If you are new to this group, please stop by the Guestbook and tell us a little about yourself.

I hope you all have a great week.
Posted by Dan - A Disciplined Hubby at 2:29 AM