Hello all.  Welcome back to the Disciplined Husbands Forum.  Our weekly gathering of men and women who are participating or interested in Domestic Discipline and Female Led Relationships.  I hope you had a great week and are enjoying the weekend.

Mine was -- a little overly dramatic -- as many of you saw in the last post.  Unfortunately, it carried over into another forum, and was just a massive distraction I didn't need this week.  And, honestly, one that I played a major role in maintaining, since I could have just deleted the damn comments and left it at that.  But, I just couldn't do it in the moment. I got caught up in the need to control the situation, which paradoxically could have been much more effectively controlled by simply refusing to engage at that level.   I really need to make this a bigger area of focus for our own DD relationship, making temper and control issues a bigger and more serious offense than they have been to date.  Anyway, we are all a work in progress, aren't we?

Which is a good segue into this week's topic.  Can dominance and control be taught or learned, if it isn't who you are at your core, or at least hasn't been part of your personality that you have been able to really express in the past?  A comment by Marisa on a post a couple of weeks ago got me thinking about this: "We found our way to DD through a crisis in our marriage, the next step would have been marriage counseling if we had not tried discipline. I am aggressive and take charge and that personality trait can't be taught." 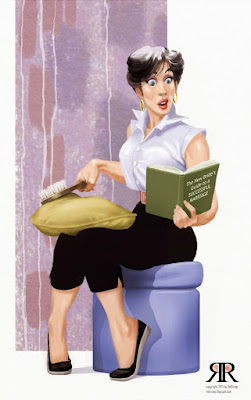 I have no doubt that we all are hard-wired with certain innate levels of aggression and tendencies to "take charge."  But, for those who lack that innate bent, can it be developed?  Is it something you can get better at with practice?  Most importantly, is it something you can actually grow to like even if it wasn't a part of your personality earlier in life? Particularly with all the negative soclialization that women are subjected to where power and authority are concerned, are there many who may actually have aggressive and "take charge" wiring that has seldom been expressed but can be if she gives herself real permission to do it?

I thought about this again this morning in connection with a comment on our last topic, to the effect that one way to test the "fantasy" of DD versus the reality is to subject him to at least one really, really hard spanking and see if it is something he still wants a few days later.  Might it also work the same way for the would be "disciplinarian"?  Perhaps cutting loose the inner Disciplinarian by giving one very hard spanking, or spending a day or two in full-blown Head of Household mode, would test whether leadership and dominance are traits that have been dormant but that she would come to really enjoy if she gave them more free rein?

What do you think?  Can dominance be learned or taught?  Has that happened in your DD or FLR relationship?

If you haven't done so already, please take a minute to fill out the polls on your level of satisfaction with the "intensity" of various aspects of your FLR and DD relationships.  And, if you're new to this blog, please take a moment to stop by the Guestbook (tab above) and tell us a little about yourself.