Of all the hardships a person had to face, none was more punishing than the simple act of waiting.” -- Khaled Hosseini, A Thousand Splendid Suns


Happy weekend everyone.  Welcome back to the Forum -- Disciplined Husbands & Disciplinary Wives, our weekly gathering of men and women participating or interested in Domestic Discipline and Female Led Relationships.  I hope you had a good week.


We had a good discussion last week about severity and intensity.  I hope it had the desired effect of giving wives who are new to this some reassurances as they ramp up the intensity, while not imposing on them any expectations beyond "do what seems right to you as you work your way along this path."  Near the end, Alan and I started going down another discussion about origins, which I admit I find endlessly fascinating.  I'll highlight one of my observations, in case people don't have time to peruse the previous topic, because I had never quite thought of the extent to which there seems to be a significant discrepancy between how most people come to this lifestyle and the way that lifestyle is portrayed in one of the sources that brought many of us to it.  My observation was: "Face it, humans are complicated creatures, and I reject the notion that we function like biologic computers where there are just inputs and outputs and if you could see the source code you could figure out exactly how input A caused output B. Your thoughts on the genetic trigger did raise one other thought with me: Is it interesting that the DWC has influenced so many of these relationships, yet it is in many ways the exact opposite of how most of them actually begin. Whether your genetic trigger theory is right or not, it does seem undeniable that in most cases, the interest in spanking pre-dates the interest in DD, and it is usually the man with that spanking interest who asks for the DD. Yet, a large majority of the stories on the DWC revolve around a woman getting fed up with bad behavior and imposing the DD lifestyle on a man who had no previous interest in spanking. The influence the DWC model has had is another indication to me that while the spanking interest is a key driver of these relationships, it is not the only one by a long shot, and the desire to be subject to someone's authority, along with the concept of imposed accountability, are additional and independent influences."  Enough said on that for now.

Last week's discussion was all about severity and intensity while being disciplined or controlled.  But, what about the time between the act and its consequences?  I'm talking about -- anticipation.  The mindset that occurs after you know you have done something deserving of punishment but before you receive your just deserts. 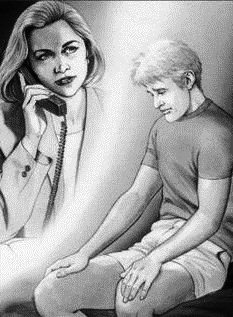 It can happen over a short or long period.  Maybe you know you did something wrong, and you know you need to self-report though part of you doesn't want to.  Maybe you have self-reported, and you are waiting for her reaction. Or, maybe she has already pronounced the sentence and told you to get ready for her to get home.

I hope you all have a great week.  As always, if you are new to the Forum, please stop by the Guestbook (see tab above) and  tell us a little about yourself and your Domestic Discipline or FLR relationship.

Dan
Posted by Dan - A Disciplined Hubby at 8:39 AM