“I met an old lady once, almost a hundred years old, and she told me, 'There are only two questions that human beings have ever fought over, all through history. How much do you love me? And Who's in charge?” ― Elizabeth Gilbert, Eat, Pray, Love

It was an interesting one, on multiple levels.  Belle’s question about why an “alpha” male would want to be the recipient in a Domestic Relationship ended up covering a lot of ground: young men and their ability to grow up, or lack thereof; spanking fetishes versus balancing power and giving up control; female empowerment and its possible impact on that female’s desire; Domestic Discipline’s ability to “fix” problematic relationships or lack thereof; preserving  male “swagger” while punishing arrogance; parenting philosophies as applied to 30 year-old daughters; and, of course, the need for a better label than “Alpha” to identify men who with dominant or aggressive personality traits.

Lost in all that was an uptick in our number of female commenters, in addition to Belle. Liz, thanks for dropping by again. Lola and Drew, welcome. 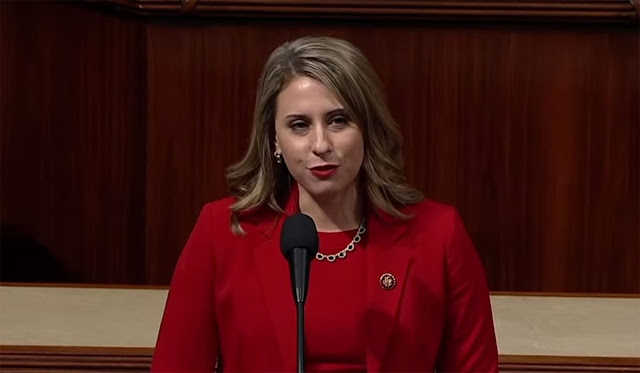 From the reports in the press, it sounds like Ms. Hill’s high school boyfriend/spouse was upset that she outgrew him, went on to bigger and better things, and became a very empowered young woman. While he was living with mom and griping that his estranged wife wouldn’t pay him spousal support, Ms. Hill was embracing her power, sleeping with staffers and casting votes to impeach the most powerful man in the world.  So, estranged husband apparently got some revenge. Some of the same right-wing press that forgave non-consensual grabbing of women by their pussies got very moralistic about consensual relationships between a congressional candidate and her same-sex staffer.  In the era of #MeToo, that was enough to sink her career.  In her parting speech, she bemoaned the “double standard” applied to women in power.  While I sympathize with her and really hope the person who leaked the photos is prosecuted for “revenge porn,” I don’t think the “double standard” label fits the facts.  Senator Al Franken was driven from office for conduct that was arguably way less problematic than sex with a subordinate, so the Democratic leadership actually couldn’t support Ms. Hill without engaging in the kind of double standard she is now condemning.  Their previous treatment of men in power kind of put them in a box.  So, to me the issue isn’t about “double standards.” Rather it’s about how far we take a movement that has done good things but when applied blindly risks denying the reality that human relationships always have, and probably always will, revolve around sex and power.

Fortunately, here at the Disciplinary Couples Club, we openly celebrate the complex blending of power relationships and sexual attraction!  If that puts me at odds with our current puritanical bent and faux egalitarianism in all aspects of our complicated lives, so be it.  Also, I'm struggling with one of the most obvious lessons of Ms. Hill’s plight, namely: “Don’t let anyone photograph you naked.” Yet, at around the same time Ms. Hill was resigning from Congress, I was posting on KD’s blog about how much I like pictures of women “flashing” in public and how I wish I could entice my wife to join in.

Now, on to this week’s topic, which I will try to keep a little tighter than last week’s meandering, as interesting as some of it was.  Near the end of last week’s discussion, Belle, Alan and I got into some exchanges about the mechanics of delivering a real disciplinary spanking, including the tools she should use, what a hard adult spanking entails, etc.  In the course of that conversation, Alan observed:

“I don't know of your guy has had a real spanking as an adult. If not, he is going to be shocked at how much it hurts and how bad he wants it to stop. Be prepared for that and making sure he has that experience and understand it is definitely part of DD. You will see a pretty radical transformation just from that –and if he doesn’t submit to it, you will know early that it’s not going to work. Tough love maybe but very important.” 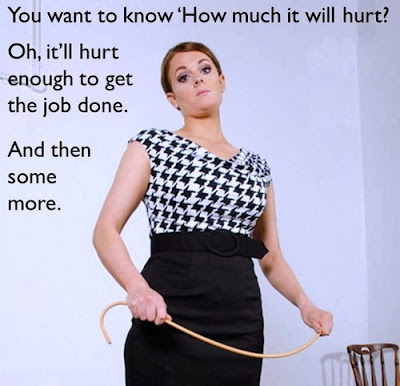 At around that same time, I had an email exchange with Caged Lion, who suggested the following topic (here in abbreviated form):

“I have an idea you may want to use for a topic. It may not be quite whatyou like because it does tend to attract the BDSM crowd, but it's an issue that's been bothering both of us. My wife keeps expressing concern about how long and how hard a spanking should be. I don't have any suggestion for her because I have no idea how other people in disciplinary relationships manage this. Do spankings always produce bruises? How long do they typically last?  Like almost every other guy in a DD relationship, you and I asked our wives to punish us. On your site any mention of a spanking might include whether or not it ended in tears but doesn't talk about how it was administered and for how long. I know would be helpful to us if we could find out how other couples handle this.” 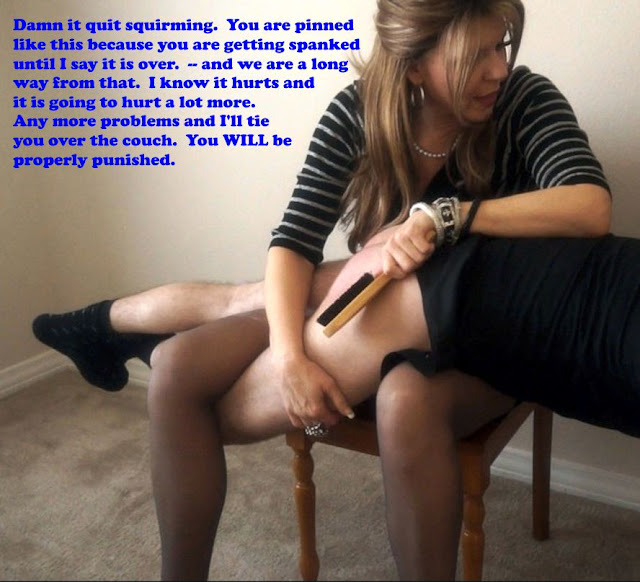 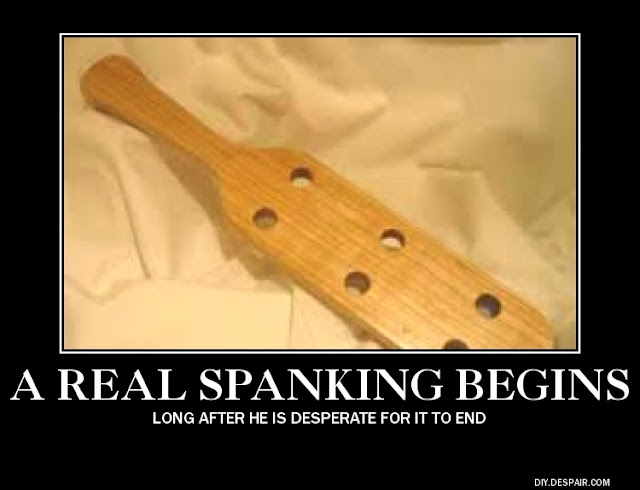 In order to avoid that sideshow this time, and recognizing that we do all have differing pain thresholds and different abilities for absorbing well-earned lessons, let’s focus on the more concrete question of how long your own spankings typically take, whether measured in time or number of swats or some other metric.

I don’t have a lot of guidance to give on this one, because when I am being spanked I typically am looking at the floor and not at a clock. And, time spent in that position is, well, a bit relative.  When I am bent over the chair or ottoman and taking a very hard paddling or strapping, it seems to take forever.  But, in reality I am sure the whole thing takes well under 10 minutes.  Probably more like six or seven minutes.  For the most part, I haven't timed them. We did inject a time element into a few spankings earlier this year, however.  Following up on a suggestion from Helen or Elizabeth (I forget which), I suggested that my wife ensure that each offense is dealt with separately.  My thinking was that by separating each spanking into a separate mini-session, I would always have an incentive to behave better even if I had already earned a spanking that week.  So, the plan we came up with is that each offense would get at least 5 minutes of actual spanking time, as measured with an hourglass, with intervening sessions of corner time to let my butt recover and to get rid of most of the numbness. We only used that approach two or three times, with the longest resulting in about 15 minutes of actual spanking time.

When we were first getting into Domestic Discipline, we implemented a system that focused more on the number of swats than the temporal duration of the spanking.  Under our system, each agreed-upon offense was assigned a certain minimum number of swats. I don’t recall the details at this point, but it went something like this:  We had agreed the binge drinking was a problem that needed to be addressed.  We set a limit on the total number of drinks I was allowed to have (two or three, as I recall).  Exceeding that limit resulted in a baseline of 10 swats with a heavy “school”-style paddle plus five swats for each drink over the agreed-upon limit.  So, even one drink over the limit resulted in 15 hard swats. There were other offenses too, most with presumptive swats in the range of 5 to 10.  I still  recall vividly a session during our first few months of DD in which I had been particularly bad. When I tallied up the number of swats, it came to 65. Now, today, that is a fairly small fraction of the number of swats she gives me during a robust session, but at the time it was far more than I had ever taken.  I told her that I wasn’t sure I should take that many.  Without skipping a beat, she told me, “Then, I guess you should have behaved better.  You’re getting 65.”  Thus, a true Disciplinary Wife was born.

Over the last few years, I have become convinced that my lack of tears will never be solved by increasing severity, in terms of the kind of implement or the strength of the swat.  If anything, it works the opposite.  If the tool is just “too much” (thick rubber straps and some paddles qualify), I cannot prevent myself from going into “resistance mode” in which I can’t avoid just trying to gut it out.  But, I’m not as sure that the same thing holds with respect to duration. I have always wondered whether a longer spanking would result in me finally breaking down, if it just kept going on and on with no relief in sight.  I’m hoping ZM will weigh in on this one in particular, as he did reach a point of real tears last year and I recall him saying it was because his wife basically decided it would keep going until he did.  I would love to hear more details about what that actually looked like. 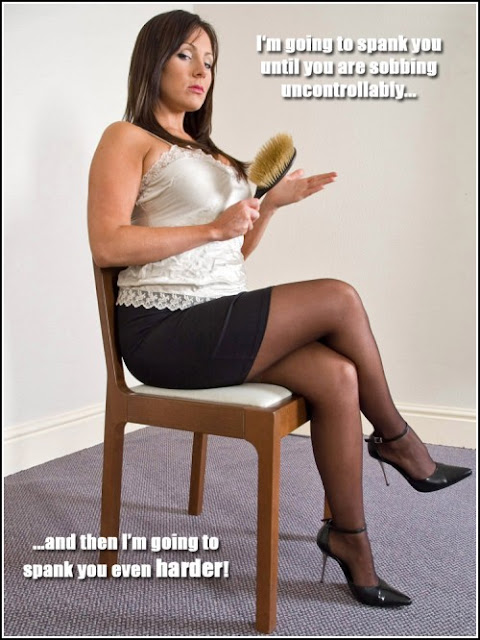 So, for the group, how long do your spankings usually take?  Have you ever timed one?  Is there a goal for it to last a certain amount of time? Does that vary depending on the offense? Or, Ladies, are you looking for some particular indication (tears, begging, etc.)

By the way, regarding Caged Lion's specific question about bruising, I used to bruise regularly and fairly easily.  After the first couple of tries after we discovered DD and after she laid down the hairbrush in favor of an actual paddle, I bruised pretty much every time.  Now it is the reverse; regardless of the severity of the spanking, I very seldom bruise.  One exception was a few months ago when she experimented with some synthetic cane.  One of them wrapped around my butt and left very nasty bruises on my hips.  Honestly, I do miss bruising.  It was concrete evidence for her of a spanking well-given, and the need to cover up in the gym made the whole thing seem a bit more edgy.
Posted by Dan - A Disciplined Hubby at 1:33 PM